Two representatives of the U.S. Postal Service (USPS) listened and responded to a litany of complaints and suggestions regarding Philipstown’s two post offices at the Feb. 11 (Tuesday) meeting of the Cold Spring Village Board. The meeting was held in Haldane’s music room to accommodate the larger than usual audience.

Cold Spring’s post office recently moved its retail operation to a trailer at the south end of the Foodtown Plaza, a move necessitated by the upcoming expansion of the supermarket. Letter carriers for Cold Spring now operate out of two trailers at the Garrison post office.  Coincidentally, the Garrison postal facility is also undergoing interior renovations.

USPS will soon begin a search for a new retail post office in Cold Spring.

A number of Garrison residents expressed concern and frustration over noise, safety and communications related to the recent changes at their post office.

Joseph Mulvey, Real Estate Specialist with USPS, and Neal Fitzpatrick, manager of post office operations, both assured those in attendance that the trailers in both locations are a temporary measure. 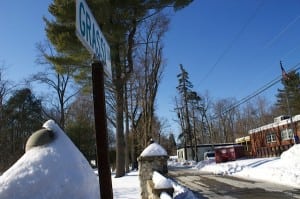 Diane Travis lives on Grassi Lane which is adjacent to the Garrison post office. She expressed annoyance over the increased truck traffic brought about by the recent developments and voiced displeasure over the fact that no one informed local residents of the changes in advance. She was also very critical of USPS for having created two new driveways off of Grassi Lane — even though it is a private road which residents are responsible for maintaining.

“We’re working people, not millionaires,” she said. Carolyn Bachan, one of a number of Cold Spring residents who supported the Garrison delegation’s concerns, asked if USPS has considered compensation for those living on Grassi Lane.

Goldee Greene, a resident of Alfalfa Lane, located immediately behind the Garrison post office, was one of several people who complained about the noise created by idling USPS trucks. “I’m very upset. I can’t take any more trucks … tell those drivers they have to shut those machines off!” she said.

Philipstown Town Supervisor Richard Shea stressed to USPS officials that Grassi Lane is a residential area and that the changes at the post office adversely affect quality of life there. He urged them to find a more suitable location for bulk operations, saying that he had been misled into thinking that the Garrison post office would be returned to preconstruction conditions — which did not include the bulk operations. Mulvey said that bulk operations would remain in Garrison for several months.

County legislator Barbara Scuccimarra also weighed in, critical of USPS for changes at the Garrison post office “just appearing” without notice while in Cold Spring numerous steps were taken to inform residents. She also said that a temporary post office could have been established at the Butterfield site in Cold Spring.

Finding a suitable site for a new post office in Cold spring is a key next step. Mulvey said that USPS is looking at rental properties only because funding for construction of a new facility is not available. He said about 900 square feet are required for the new retail operation. A new bulk operation could be located elsewhere.

Several suggestions were put forward for a new Cold Spring post office location. Jackie Snyder and Tom Allen made a pitch for a commercial property they own on Route 301 in Nelsonville. Other ideas included the Butterfield site, a lot adjacent to The Nest daycare, the M&T Bank property, the Powers & Haar building, and 37 Main St., near the pedestrian tunnel. One intriguing suggestion was to put the new post office inside the expanded Foodtown.

Mulvey said that written comments about Tuesday’s meeting could be sent to him up until Feb. 26. Correspondence should be sent to: Joseph Mulvey, Real Estate Specialist, USPS, 2 Congress St., Room 8, Milford MA, 01767-9998. He said that potential sites for the new Cold Spring post office will be posted once determined and public comment solicited. When a site is selected he said Mayor Ralph Falloon will be notified and that there will be a 30-day appeal period.

Chair of Special Board critical of Village Board

Michael Armstrong, Chair of the Special Board for the Comprehensive Plan and Local Waterfront Revitalization Plan, addressed trustees near the end of the meeting. Armstrong expressed dismay over the fact the Village Board has not acted on the Special Board’s recommendation that a working group be established to develop concept plans for the Cold Spring Boat Club.

The club building will be vacated by September and then razed. The boat club is in the process of determining how the building will be replaced after cleanup of coal tar beneath it is complete. The club’s lease of the property, which is owned by the village, runs through 2014. Armstrong has disagreed with the Village Board’s interpretation of that lease, saying that he believes the razing of the building negates the agreement. Trustees have accepted Village Attorney Mike Liguori’s interpretation that it does not.

Falloon and Trustee Matt Francisco have been meeting with boat club leadership to determine next steps. At Tuesday’s meeting both Falloon and Francisco rejected the need for a working group. Francisco said that once the boat club determines a framework for how it wants to proceed, public comment can then be sought. He also said that the club membership has not yet come to a consensus on how to proceed. In the end, Falloon said that he and Francisco would continue dealing with the boat club and that a working group was not needed.

17 thoughts on “Residents Pepper USPS Reps with Complaints and Questions”