Having a say in student government

Eighth graders at Garrison School are the top dogs, enjoying their all-too-brief tenure as kings of the hill before being toppled again as lowly freshman upon entering high school. Along with the fun comes an opportunity available only to students in that grade at the school: class officers. 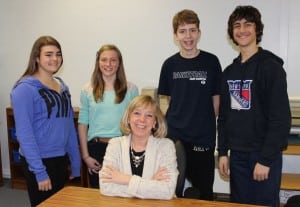 Each year a number of students run an election campaign, for one of four positions. The campaign components include lobbying, making posters and presenting their platform in a formal speech. The election is taken seriously, with actual ballots prepared by Mary Foppiano, the social studies teacher, and a voting booth where all middle school students (grades 6 through 8) exercise their right to choose.

This year’s class officers are Desi Young, president; David Higbee, vice president; Alex Mancuso, treasurer; and Bridget Batignani, secretary. They meet every Tuesday, during recess, with the school’s eighth grade advisor, Susan MacEnroe, and act as representatives of the approximately 30 students in their grade. Each of these officers harbored a desire to do this dating back a few years.

“I like having a say, and it’s nice to have the final decision,” said Young, who ran against four boys to gain her position, which she says she did despite “being really really nervous giving my speech.”

Meeting once a week is a new thing (the meetings used to be monthly) and is indicative of the enthusiasm this group of officers feels for their jobs. At the meetings they discuss the many upcoming events — quite a few of them fundraisers for their spring trip to Boston — and plan details.

In doing so they figure out how best to deal with a very limited budget, think about potential parent resources, and sometimes choose themes or activities which comprise part of the event. It’s an internal group negotiation, and also reflective of their class as a whole, but thus far there’s been no real friction. “There’ve been no major disagreements,” says Higbee. “There’s always compromise.”

Gleaning opinions from their class, usually during homeroom, the officers try their best to turn those ideas into action through a wide range of activities ranging from sporting events like the fall eighth graders vs. parents and teachers soccer game to an upcoming basketball game with the same combatants. Then there’s the planning for a variety of dances including one for Valentine’s Day (also a carnation sale), a bowling night, movie night for the winter formal, themed Fridays (Harry Potter being one of them) and their biggest fundraisers, the holiday wreath sale (120 were sold, over half of which were decorated by students) and weekly hot pizza lunches.

Along with themes and decorations, the officers choose the cost of admittance. As treasurer, Mancuso is responsible for a double-check count of the monies collected during each pizza lunch. All of the officers do their best to promote the activities to their classmates and, when applicable, to the student body as a whole.

There isn’t an actual budget for the big spring trip to Boston, says MacEnroe. “It’s more like putting it all together and generating enough money to get them to Boston without [it costing them] any more than spending money,” something they’ve been successful at in recent years. MacEnroe says this particular group “makes my job really easy. They’re phenomenal young men and women.”

Although not yet certain which high school they will attend next year, the foursome does plan to stay involved in student government wherever they wind up. They also are very encouraging of students in lower grades taking up the mantle and running for office once they become eighth graders. Higbee would “definitely tell them to run. If you’re going back and forth on it, just do it. The public speaking aspect of it is a huge confidence booster.” Young calls it “a good experience, even if you don’t win. You get good feedback.” Higbee adds, “You work hard for it and you achieve it.”

Sometimes the class officers are thrown a curve, which they then learn from. On behalf of their class they submitted a proposal for fans in the locker area, to improve the stuffy atmosphere there. In response to this a guest speaker came in and explained in detail to them the technicalities of why it couldn’t be done and how the “improvement” would actually make conditions worse.

“I love that their voices were heard,” says Garrison School Principal Stephanie Impellittiere. Addressing the officers, she told them, “In this case it didn’t change things because of technicalities but you learned why you couldn’t change it.”

Impellittiere likens the chain of command relating to the class officers to that of a company: from principal to teacher to class advisor to class officers. “Mrs. MacEnroe comes to me with questions about financial and procedural issues, then goes to the eighth grade class officers, who then go to the students — it’s just like a business.”

Impellittiere said she loves “that I watch them as 5-year-old kindergartners, coming in here, and then one day they turn into sophisticated young adults, ready for high school. It’s wonderful to see the progression of their growth and development; they’re exemplary.”

MacEnroe states it simply: “Eighth grade is a year of firsts and lasts that they will remember forever. This is a part of it.”