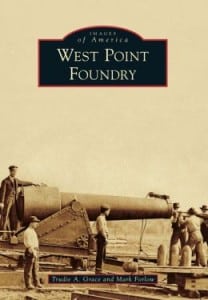 Local authors Trudie Grace and Mark Forlow present their book, West Point Foundry, at 2 p.m. on Saturday, Feb. 22. The event will be held in the program room at the Desmond-Fish Library in Garrison and includes a presentation of Foundry images featured in the book.

West Point Foundry (2014) from Arcadia Publishing’s Images of America series, takes up the subject of one of the first major industrial sites in the United States. At its peak during the Civil War, the foundry manufactured cannons of several types and most prolifically Parrott rifled cannons, which were widely employed and crucial to the Union victory.

The book traces the foundry’s story from its early years through the period of the Civil War to its eventual status as a site of archaeological excavations. Over 225 images are shown in photographs, artworks, illustrations, and maps.

The event is free and open to all. Visit desmondfishlibrary.org.