Guests requested to come in costume to Feb. 23 TV-inspired celebration

Caution: spoiler alert — if you haven’t been catching up with your Downton Abbey viewing, you may wish to cease reading this story about a Beacon eatery. Puzzled by this connection? Wondering how Mr. Bates and Edith et al. have somehow crossed the pond and the decades?

Shirley Wenlock-Hot behind a counter laden with British goodies.  (Photo by A. Rooney)

A hint: that Beacon eatery is the Cup and Saucer Restaurant and Tea Room, whose proprietor, Shirley Wenlock-Hot hails from England and arrived in the Hudson Highlands via the Bronx after crossing the Atlantic on Cunard’s Queen Elizabeth.

This Sunday, Feb. 23, at 4 p.m., the Cup and Saucer will host its second “Epic Downton Abbey Tea,” at which, according to the invitation, the “Dowager Duchess of Grantham invites you to celebrate the upcoming finale of season four with a champagne toast followed by a four-course afternoon tea consisting of soup, savouries and sandwiches, scones and a dessert of course.”

Guests are encouraged (but not required) to come in period costume (Edwardian to Jazz Age), and a prize for the best is promised. The celebration includes wait staff in period uniforms and a Downton trivia contest to exercise the mind before consumption of all the food.

Tables set for tea and more at Cup and Saucer Tea Room.  (Photo by A. Rooney)

As proprietor of Cup and Saucer, Wenlock-Hot wears all the hats, mixing in a bit of Mrs. Patmore (she cooks), Mrs. Hughes (she trains the staff), Carter (she’s the brains behind the operation) and Lord Grantham (she owns the place.) Although the Cup and Saucer has been open in Beacon for about 13 years — “the longest existing business on the east end of Main Street” says Wenlock-Hot — she is not the original owner.

Opened by a woman in her mid-70s as a retirement project, according to Wenlock-Hot, her lack of restaurant experience, and the limitations of what was then a “just tea” menu proved to be “too much for her” and Wenlock-Hot, who was working as a server there, bought it from her about seven years ago.

With a background in restaurant work, having “watched the chefs” during long stints at Fishkill’s Cornerstone Restaurant and the Inn at Osborne Hill, she set about transforming Cup and Saucer, adding a much broader range of “international comfort food.” With an Austrian mother and a Hungarian father who emigrated to the UK, goulash, bratwurst and spaetzle join traditional British dishes such as cottage pie and bangers and mash on a diverse menu which also includes lighter fare, with a variety of sandwiches, wraps and salads along with crepes and quiches. 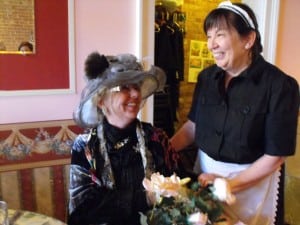 Photo courtesy of Cup and Saucer

A British tea, for one or two, is always the lead item on the menu, and a small selection of British goods, including teapots and biscuits are available for sale at the front of the large tin-ceilinged room. Wenlock-Hot says there isn’t one single “most popular item” but rather it “depends what they smell when they come in!” although when pressed, she mentions the butternut squash ravioli with maple bacon cream and the salmon burger as best sellers.

The Cup and Saucer is open from 11 a.m. to 5 p.m. every day except Tuesday with a full lunch menu available throughout, and stays open for dinner on Thursdays until 9 p.m. and Fridays and Saturdays until 8 p.m. In addition, the first and third Mondays of each month are designated “Board Game Nights” and attract 20 or more players most sessions. 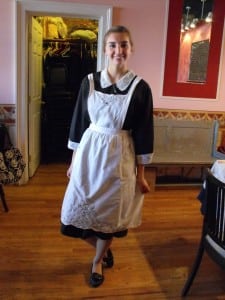 For a charge of $7 people can come in and play a variety of board games, from Scrabble and Boggle to the ‘Euro-games’ like Carcassonne, while enjoying a light buffet and beverages. Thursdays are music nights, with acoustic selections from local musicians. The walls of the restaurant function as an art gallery of kinds, with solo exhibitions up for months-long stretches. The Cup and Saucer has hosted special celebratory events before, one being Queen Elizabeth’s jubilee in 2012.

Right now the Cup and Saucer’s clientele is more tourist than local, something which perplexes Wenlock-Hot, who says she is “very community minded” and is involved with the Beacon Chamber of Commerce, supports mid-Hudson Animal Aid and participates in many local events such as Windows on Main. “We don’t get the hipsters, and I’m not sure why,” she says. “I wish they’d come in and give us a try — we’re now serving wine and beer, just got our license — and I think our menu is diverse and reasonably priced.”

Arriving first at the Bronx as a young teenage émigré, marriage brought Wenlock-Hot to Putnam County and then to Fishkill, and she felt more at home in the Hudson Highlands.

“This area reminds me so much of the Midlands in England,” she says. “It’s much the same, with the river and the mountains.” Home was the small (but musically-inclined, producing Rod Stewart, who went to school there and Ray and Dave Davies, who founded The Kinks there) village of Muswell Hill, north of London, a place she calls “quite unchanged through the years; the names of the storefronts are different, but that’s all.”

Wenlock-Hot began working at Cup and Saucer after scoping it out while she was doing an off-site catering business called Time For Tea. She recalls:

I came to see how it was working and wound up working here. Buying the business was a big decision, but it’s all about perseverance — if it’s something you want to do, stick with it. I could see that the ‘just tea and tea sandwiches’ wasn’t working; the menu wasn’t diverse enough. Now we can have someone in who wants a traditional tea, but the person who comes with her can have a Reuben. Above all we’re not a froufrou place; we try to make it warm and inviting — you can come in in jeans or dress up a bit, it’s entirely up to you.

And would Downton’s kitchen staff, Daisy and Ivy, be welcomed to work at Cup and Saucer? “I would hire Daisy in a heartbeat,” says Wenlock-Hot, adding, “but Ivy — I’m not sure. She’s extremely naïve.”

Tickets for the Downton Abbey tea cost $39 per person, with reduced costs for whole tables booked and can be reserved at eventbrite.com. For more information visit the Cup and Saucer’s Facebook page. Cup and Saucer is located at 165 Main St., Beacon. Call 845-831-6287.