In its earliest years Beacon’s “Howland Circulating Library” as it was known at its founding in 1872, outlined stipulations now no longer in place: no member was allowed more than one volume at a time for every share owned by him (the library was then private), and gentlemen were requested to remove their hats on entering the room. 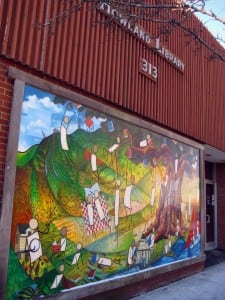 Rick Price’s mural, located on the exterior of the building, depicts a tree of knowledge growing from the foundation of the Howland Cultural Center, which was the original Howland Library.

A history of the library, prepared for its centennial by Patricia McGurk, describes the library in its first years as having “the aura of a classical academy of learning: culture oriented subscribers sort out the best in literature; voices were quiet and books protected behind locked doors.” Its founder, General Joseph Howland, would find a much-altered, community-focused library today.

Originally located in the building created for it, what is now called the Howland Cultural Center, further east on Main Street, the library initially contained 2,184 books, and a collection of periodicals including the Wappingers Chronicle and the Matteawan Enterprise, and catered to 534 subscribers at the end of its first year.

By 1911 some things had changed — a subscriber was now allowed to borrow two books per subscription provided one was nonfiction — and the library reflected a greater regional and international history, collecting book donations for soldiers in WWI, closing for weeks during the influenza epidemic of 1919, and, finally, in 1929, transitioning into a free institution.

Now, the library serves a population of about 25,000, including the City of Beacon School District plus pieces of Fishkill and Wappingers Falls. Having outgrown its former quarters — the collection having increased by then to more than 10,000 volumes — the library relocated to its present premises, in what had formerly been Fishman’s Five and Dime, in 1976. A 1980s expansion created multiple rooms containing adult, young adult and children’s collections, a homework room and a community room, along with offices.

Next door is Beacon Reads, a used bookstore operated by the library’s Friends group. Signature features of the library are the “Common Clay” relief sculptures found inside the entrance doors. Conceived by Mika Seeger, and depicting hundreds of years of Beacon’s history, this community art project, completed in 1992, grew out of a desire to make an enduring work of art by, for and about the people of Beacon.

Along with large collections of books, DVDs, computer programs and other software, the library extends its reach throughout the community with a variety of programming for all ages, babies to seniors. Ginny Figlia, head of youth services, says, “It feels like libraries have really morphed into being the community centers of the areas they serve. I find it great that we’re often one of the first places people come into to meet, connect with each other, either when they’ve just moved here, or had their first baby.”

Figlia, who has been at Howland for almost 25 years, enjoys seeing the toddlers once brought there by parents in her first years now returning with babies of their own. “It’s satisfying seeing lifelong library users,” she says. 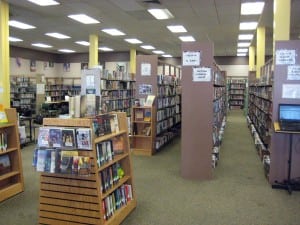 Teenagers are well-served by the library, and use it frequently, often coming in groups to every fourth Friday’s Anime Club and every third Friday’s Gaming Club. They can serve on the Youth Advisory Committee, advising on their wants and needs and hosting their own activities. A drop-in homework center runs each Monday through Wednesday from 3 to 5 p.m. following the Beacon school district calendar, and assistance is given to students in grades one through eight by seniors from the Beacon High School Honor Society. Figlia, who notes she has a “wide teenage base,” attributes this, in part, to the library’s Main Street location, walkable from a number of schools.

Elementary-age children can choose from Tail Waggin’ Tutors, in which they are able to read to a therapy dog (who never criticizes); or attend a Crafty Kid workshop, offered once a month to all ages. Preschoolers have dedicated story time/craft activities on Thursdays and enjoy unstructured play on the Imagination Playground blocks at the library’s “Block Party” afternoons on Thursdays through the end of March or construct with Legos at the same time. Toddler Tales are just that, designed for two- and three-year-olds, Wednesday mornings.

For those even younger, Come and Play Wednesdays are meant for babies, toddlers and young children with parents or caregivers. These take place year round on a come-and-go-as-you-please basis. The littlest are catered to at Baby & Me Story and Play, where those from “birth” to 24 months enjoy rhymes, lap games, songs and simple board books.

Some programs require pre-registration; check with the library for details. Several programs are co-sponsored by weeplayproject.org, a group whose mission includes promoting excellence in children’s and youth programming building an organized coalition of community parents. They support the library and vice versa, for instance providing personnel to run events, while the library provides space and publicity.

Children’s art — like this depiction of the South Avenue School by one of its students — enhances library walls. (Photo by A. Rooney)

Figlia calls this an example of positive change through the years: “I feel a difference in community involvement. Beacon is a tight community of active parents and they’re involved and supportive of the district and the library — there’s been a real swing in that direction.”

Figlia is particularly proud of a relatively new program, Young Adult Connections, which is a social support club for young adults (teenagers and beyond) with Asperger’s Syndrome and/or other social challenges. Along with certain “ice-breaking” exercises and games the group does yoga to provide coping mechanisms for anxiety issues and de-stressing.

Alison Herrero, Head of Adult Services and Digital Literacy has many offerings of her own. Along with a monthly daytime book club — new members always welcome — meeting every second Tuesday, there is a knitting club for novices to experts; one-on-one computer lessons Wednesday mornings, and Brain Games, sponsored by the Dutchess County Division of Aging Services, in which “the group plays mind-stimulating games and puzzles while adding a dash of friendship and laughs.”

One Friday per month is devoted to International Film Night, on which each film is shown in its original language with English subtitles, and a culturally-matching dessert is served, made by library assistant Ai-Ping Ma.

There are also many special events: Jane Austen’s birthday was celebrated with tea and cake; authors of more recent vintage have presented talks on their books; musicians, historical society presentations, cooking programs, induction of Beacon’s poet laureate and writing workshops are just a few events which have dotted the calendar recently.

Upcoming is a Feb. 19, 1 p.m. talk by Sue Adams, of Adams Fairacre Farms, on the history of the meanings of different flowers, and a Feb. 20, 6:30 p.m. presentation on the Galapagos Islands by Bill Fiero, photographer and naturalist. Herrero says some people attend nearly every program, while others pick and choose.

In addition, there is scheduled tax help from the AARP for seniors, GED review for those taking that exam, and multiple appointment slots for assistance from the Maternal-Infant Services Network (MISN) on educating people of all ages on “navigating healthcare options” and helping them “wade through the often confusing application process.”

Reference Librarian Peter McGivney, another longstanding staff member, is on hand to assist with research, something much changed through the years. “Once upon a time it was all homework. Now they can just go online and get all the wrong information there! Google really isn’t helping; I spend a lot of time finding stuff.”

McGivney also assists with adults researching local history and/or their families. “Apparently everyone and their Uncle Bob has passed through Beacon,” he quips, adding that they possess city directories from 1924 through 1978; a genealogy index for the Beacon Evening News from 1940 to 1962 and the A-Z Database.

A calendar on the library’s home page, beaconlibrary.org, includes details on recurring programs and special events. All programs are open to residents of the five counties (Putnam included), which join together under the Mid-Hudson Libraries banner. Howland Library is located at 313 Main St., and the phone is 845-831-1134.