When Nancy Swann was 17, she saw her first two Broadway shows. One was Hair and the other 1776. “I was blown away with it,” she recalls, that stage-induced spell being part of what then led her to a life in theater. Later, Swann, creative director at Garrison’s Depot Theatre, experienced it again when her son, Trevor, was cast as John Adams in a Garrison School production of that same musical. Swann has now taken the reins as director, bringing an “in concert” version of the 1969 Tony-Award (for best musical) show about the journey to American independence to the Depot for three weekends, beginning March 7. 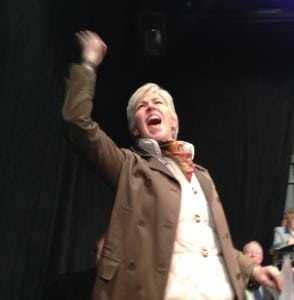 Julie Heckert, performing the role of Representative John Dickinson, in rehearsal for 1776.

The story of 1776 focuses on the events leading to the drafting and signing of the Declaration of Independence; in particular the efforts of John Adams to persuade his colleagues from all 13 colonies to vote for independence and sign the document. “It’s a strange musical,” says Swann, “because it doesn’t have much music. There are long stretches of text, and actually if you hold up the score, it’s only about a half-inch thick, whereas something like Les Miserables is twice as thick and there are two books of it!”

This version of 1776 is being presented in what is the equivalent of a staged reading of a play, i.e. sets, costumes, props, entrances and exits will be kept to a bare minimum, and instead the emphasis will be on the text and the score. The large cast of actor/singers (who include a number of women playing men) will be “on book” for the script and “off book” for the songs.

Swann has never done anything in this format before and says she is “learning how to hold back on staging things. It’s hard. I have to turn my staging brain off. Because it’s such a large cast, getting everyone to understand they have to actively help the story along with their reactions, has been its own directorial challenge. I’m asking them to do a lot more on their own without physical stuff to anchor them. But the material is great — there’s a lot of humor in the book and the music is very powerful and defines the characters extremely well.”

Actress Jean Garner has the performer’s take on performing in this manner: “The actor still has a lot of work to do to in order to inhabit the character and know the play. There is also an art to knowing when to look at the script. At the same time, a rehearsed reading of a play frees up the time, effort, and expense involved in costumes, line memorization, and detailed staging. You have the pleasure of performing in or watching the play in a more streamlined version.” 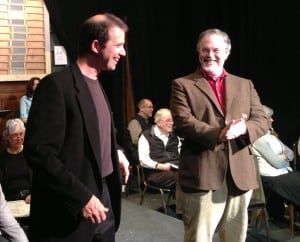 Sterling Swann, left, and Mike McKee in rehearsal for 1776.

Paul Kassel, who plays John Adams, calls the biggest challenge “managing the shifting conventions — from reading and indicating to fully embodying the action. You’re holding the book, even though you’ve memorized most of it, and your behavior is sometimes “real” (that is, you are really playing with an intention and engaged with your fellow actors) and sometimes is just a reference (indicating) to what would happen in a fully staged production. So, the trick is finding the best time to engage and play fully and when to adjust the performance to the conditions of the reading. That said, it allows the audience to turn their attention to the words and music in a more direct way. In a full production, the audience lives through it with the actors and doesn’t really evaluate the material in the same way.”

The material is very topical. “The more I read and watch it,” says Swann, “the clearer it becomes how so in sync it is with what’s going on in Congress today: the division of the political parties and issues.

Kassel feels similarly, stating: “In the case of 1776, our reading gives the audience a chance to reflect on the amazing debate in Congress at the inception of this country — and you can really hear how what is happening right now was happening then — deep divisions on how to best organize a country. Plus ça change! One of the most resonating moments for me is when Adams has to give up the anti-slavery clause in the Declaration in order to win the votes of the South. Knowing the devastation this led to (and, of course, we are still living with that legacy today) is terrible. But — and this, why I love to act — it is a wonderful moment to play, because it plays itself. That’s (for me) the sweet spot — when the play, performances and the real world intersect emotionally, imaginatively, and intellectually.” 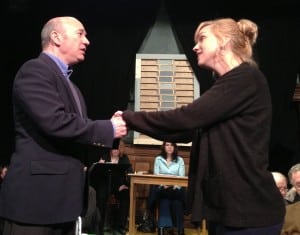 Garner has “loved revisiting this period in history through the eyes of this play and these characters. If anything, rehearsing this play has made me more acutely aware that the year 1776 was really not so long ago. Many of the struggles we see today in Congress, over money, land, civil rights, representing the people, war, and national identity, to name a few, originated with our earliest members of Congress and are portrayed in 1776. With this play, we see the strange admixture of personalities and figures, the humorous and frustrating banalities, the successes, tragedies — and the stakes — that have been part of Congresses past and present. I feel this play presents Congress in a form that’s easy to take and enjoyable — musical comedy — while also asking big questions, such as, “What does it mean to represent the people?”

As with most story-telling, regardless of the framework, what 1776 finally comes down to is its human aspect. Swann says, “It brings the whole process of declaring independence to life. It makes you realize that our founding fathers were humans with their own faults and strengths.”