Longtime friends who met through professional affiliations, designer Stephanie Doucette and stylist Evan Ross, were both ready for a change. Despite, or maybe because of decades of experience at the epicenter of the fashion industry in New York City, each was seeking a shift.

That change materialized in the form of their new store, called Swing, which opened its doors, in a soft opening this past Sunday, Feb. 23, in Cold Spring. The soft opening allows the owners to, according to Ross, “Get to know the people in the town and vice versa; learn what are the hits and misses.” They are happy to be a part of what Ross calls “the town’s new energy.”

Main Street rumors (can there be such a thing?) had labeled Swing a children’s clothing boutique, which indeed it is, but its collection also includes women’s wear, accessories for all, and home goods, all under the ‘lifestyle’ banner. With Doucette’s flair for merchandising and both of their well-trained eyes for items with that certain extra something already evident even as boxes of new items were being unpacked and displays tweaked prior to opening, Swing is part of the influx of new businesses hoping to invigorate the shopping, strolling and hence dining and venturing on and beyond Main Street.

Asked what brought them, and Swing, to Cold Spring, a breathless, overlapping dialogue, from the outgoing, eager to talk pair ensued. 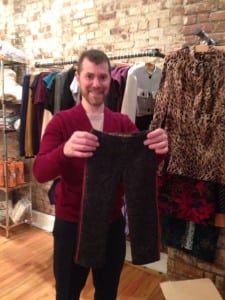 “My three little guys (actually two guys and a girl), my other half, Mark, and I were ready for a change,” recounts Doucette. “House hunting never felt right, because I wanted to be able to walk everywhere and not have to rely on a car. I got on a train, walked up Main Street and found it magical … I was telling Evan about the town and why I was moving: there were kids everywhere, more space, a relaxed vibe. In the city everything pumps so fast, here you can take a breath, get into a different rhythm. Evan posed the question, ‘Should we open a kids’ store there?’”

Ross says, “It felt like there was a hole — there was nowhere to pop in and grab something special.” After thinking it through a bit more they realized it “couldn’t just be things for kids — it had to be more than that; according to Doucette, calling it “‘Lifestyle,’ a place where you could come and discover something new every time you came in.” Ross piped in with, “Online shopping is so boring. I like that visceral quality, the story the store is telling, touching it and knowing what you are getting … Swing is very ‘edited’ and is a reflection of things we love and that you’ll want and need.”

Some of those things they love and hope that their customers will both covet and require were described on a tour of the main room of the shop (back rooms contain a dressing room space, and a play area for children replete with a large train set and pretend tea table). Featured products include women’s clothing from Doucette’s own line, with custom designs and sizing also available, as well as vintage designer dresses — (seasonal and evolving) from Ross’s former New York City store.

Mini Doucette’s offerings include children’s and infants’ capes and bloomers made from men’s suit fabrics. Referring to the limited-run fabrics and emphasis on linings, et cetera, indicative of their designs, Doucette says, “You might not care and all and not get it, or you do, and you do.” Ross adds, “Much of what we have is for little kids, but with a sophisticated, adult point of view.” 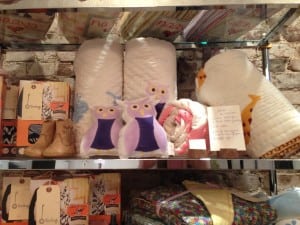 Hand-blocked quilts and other designs on display at Swing.

Not everything is custom made, but most are from small lines, not found elsewhere locally. Indeed, Ross and Doucette make a point of saying they are trying not to carry things that other local merchants have, thus avoiding toys and games carried by stores such as The Gift Hut and Kismet; they have felt very supported by the store-owning community in Cold Spring.

Some of their other stock includes:

One-of-a-kind hand-blocked quilts and stuffed animals, from Naaya By Moonlight

Backpacks, coolers and lunchboxes with simple, vivid designs on them from So Young

Unisex, children’s shoes from Frye as well as classic, traditional shoes, including saddle shoes and ‘little hikers’ from Kepner Scott, a Pennsylvania-based company, which has been manufacturing shoes since 1888.

Onesies with bow ties made by Stinky McGee, whose tagline is “Made in Brooklyn, for boys everywhere”

Sock sets, including the catchily-named ‘Happy Sailor’ by Etiquette Clothiers

Swing is filled with little notes describing the story behind each product. Of course the owners have their own stories to tell. Doucette calls herself “the person who didn’t know what I was going to do.”

A degree from the garment district

She taught yoga for eight years and relocated from New York to Los Angeles, where she worked in a boutique and helped open a second one, learning much about buying and merchandising along the way. Marriage and family brought her back to the east coast, where she wound up managing the flagship of the then five-store boutique Intermix. “While I was there I learned more about design and was exposed to new things,” she explains, “and that led me to start designing. I always say that I ‘got my degree’ in the garment district.” A split with a business partner plus the birth of her three children sidelined her for a while, though she still did custom work, just not collections. 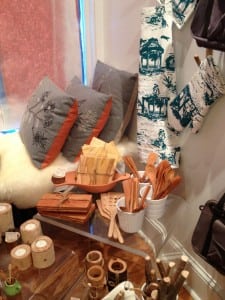 Spoons and other objects made from hardwoods are part of the ’lifestyle’ selection at Swing.

Ross, after time spent in San Francisco running an art gallery, came back to New York and wound up working as an assistant to Cyndi Lauper. Noting Ross’s style, Lauper asked him to round up accessories for her for a tour to Japan, and, by doing so, accelerated his career as a stylist. Working for an assortment of celebrities and publications like Vogue, Elle and Rolling Stone, he then transitioned into opening his own store, Frock, in NoLita, which specialized in vintage, wearable designer clothing and had devotees like Julia Roberts and Sarah Jessica Parker.

Closing Frock to pursue an offer to be a fashion director for an online start-up, which then didn’t pan out, Ross sought a change, and, having fortuitously re-connected with Doucette when she needed a particular pair of shoes from Frock, suggested opening what has turned into Swing after hearing her description of Cold Spring and being familiar with it from visits in years past.

Swing is located at 65 Main St., Cold Spring. Hours will vary until the formal opening, but their Facebook page will be regularly updated, or phone them at 845-809-5955. Their website, swingshopping.com, will launch soon.