In a roundtable dialogue, the Philipstown Town Board and Cold Spring Village Board last week agreed to pursue consolidation of town and village building departments and discussed establishing a town water district to collect overdue water payments from scofflaws outside the village.

At the joint meeting Wednesday (Feb. 26), the village delegation – Mayor Ralph Falloon and Trustees Bruce Campbell, Matt Francisco, and Stephanie Hawkins — explained that Cold Spring has too much work and too little money for its building department to function properly. Currently, the department consists solely of building inspector-code enforcer Bill Bujarski. Budget constraints limit his time to four hours a week, and he handles both clerical and the professional aspects of the job. The scant resources and schedule mean work piles up.

Bujarski “is just inundated,” as Francisco put it. “We’d like to provide the best possible service at the lowest cost” and want “to investigate consolidation, to see what we could do about that, to deliver a better service.”

“Bill works his tail off for us. You just cannot keep up” with the demand, Falloon remarked. “In order to maximize our building department we need to increase hours. The problem is hours is money.”

The town building department-code enforcement office, led by Kevin Donohue, operates fulltime five days a week, with staff support and an ad hoc inspector available one day a week to assist Donohue, according to Town Board members. “From a service standpoint, that’s one thing in the plus column” for a merger, Town Supervisor Richard Shea commented.

Merging the departments “is a good idea. It’s well worth looking into,” said Campbell. However, he continued, “what does that mean for the village, to our current building inspector’s position? Does it take him right out of that spot?”

It could, Shea answered. “I lot of that would be up to you guys. The question is: how many building inspectors are we going to have? I don’t think three makes sense.” If village leaders opt to merge the departments, he added, “then your building inspector is going to go. That seems the way it would work, from my perspective.”

Nevertheless, Bujarski could be employed as an ad hoc or back-up inspector in a combined office, Town Board Member John Van Tassel proposed, an idea Shea welcomed.

Other possible issues include the relationship of a combined department with such village entities as the Cold Spring Planning Board and Historic District Review Board, any municipal law ramifications, and the logistics of consolidation.

Assuming such points can be resolved, “it seems like this is one of the potential win-wins,” Falloon said.

“It makes sense for us to work together because we can provide a better product,” Shea said. ““It could be budget-neutral but you realize much better service. I just see it as an opportune time to do it.”

Audience member Michael Bowman declared that “sharing of services would be a great thing” but wondered if residents would be able to react to the plan through a hearing or referendum. 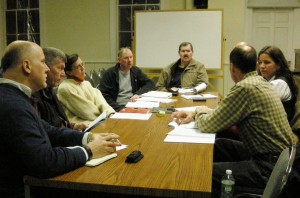 Members of the Cold Spring Village and Philipstown Town Boards Feb. 26 discuss building department consolidation and creation of a water district. They are, around the table, from near left: Cold Spring Trustees Matt Francisco, Bruce Campbell, and Stephanie Hawkins and Mayor Ralph Falloon, and Town Board Members Mike Leonard and Nancy Montgomery, with Supervisor Richard Shea (back to camera); not visible: Town Board Member John Van Tassel. Photo by L.S. Armstrong

Bowman and Francisco are candidates for trustee, on opposing tickets, in the March 18 village election.

Village Board members also requested Town Board help in getting long overdue water bills paid. Falloon said that outside Cold Spring, 191 users, many in Nelsonville, obtain water from the Cold Spring water department. Some don’t pay their bills — and haven’t in years, Falloon and his colleagues said.

They proposed establishment of a town water district for users outside of Cold Spring. Under this plan, the water district would contract with the village to serve non-village customers. Any who did not pay would find the charges added to their tax bills, processed by the town government.

As a village, “we cannot legally put their delinquent bills through taxation” collection, Falloon said. “To recoup the money, we have to either shut their water off and/or sue them. Obviously, that’s not a practice we want. It feels like a horrible idea. But we don’t know what to do and we’re just carrying” the expense.

Arrears total about $25,000 annually; of that amount, about $10,000 is from two water customers alone, Hawkins said. She said that curtailing water service to scofflaws is difficult in part because they often share a line and their flows cannot be shut down without turning off the supply to an entire neighborhood.

Town Board members were amenable to helping, provided several questions can be answered, among them how Nelsonville, with its separate village government, would fit into a water district.

“This also has to be presented to Nelsonville. Nelsonville as a municipality could say ‘no,’” Falloon acknowledged. Overall, he suggested, the water district could work for everyone. “It is, in a way, almost another piece of consolidation,” he concluded.