For 2014, the Beacon Arts awards returned to the location of their first ceremony, Dia:Beacon, to celebrate Beacon’s continued ascendancy in the arts, and to honor their first president, Linda T. Hubbard, owner of the RiverWinds Gallery and mover and shaker in all things arts in Beacon and beyond. BeaconArts is an all-volunteer, nonprofit organization whose mission, in part, is to encourage the advancement of the City of Beacon as an arts and cultural center. 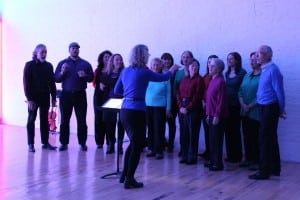 The filled-to-capacity parking lot at Dia reflected the large turnout for this fourth edition of the awards Feb. 27. That crowd filled the large space in the Dan Flavin gallery, where the multicolored light sculptures emanated a peach-pink hue, which changed as the outside light faded, adding a special character to the evening. After time for cocktails, socializing and nibbling on food catered by Beacon’s Homespun Foods, the evening got under way with a performance of Breaths by the Beacon Music Factory People’s Choir under the direction of Garrison’s Cat Guthrie.

The evening’s host, Karen Michel, immediately connected the light in “this magnificent space” and the work of the honoree, saying, “Linda takes the light of the Hudson Valley and incorporates it into her photos … Tonight is to shed light on Linda.” With that, she introduced the first speaker of the evening, Dia:Beacon’s Managing Director, Susan Sayre Batton, who welcomed the crowd saying, “We’re honored to be hosting this event for Linda Hubbard.”

After Batton thanked all of the staff along with other contributors to the evening, she continued: “We’re opening our doors because Linda Hubbard and all of you opened your doors to Dia; we came together to create something special … I hope you saw the recent ‘I Love New York’ commercial, which is driving traffic to Main Street as well as to Dia:Beacon.”

Kelly Ellenwood, Vice president of Beacon Arts spoke next, noting Beacon Arts’ mission, adding, “but we go beyond that. One of our functions is to be a fiscal sponsor for others.” She then proudly announced three projects which had just been awarded grants through Arts MidHudson: Beacon Independent Film Festival ($1,500); Beacon Open Studios ($1,450) and Beacon 3-D — a new, annual, outdoor sculpture event debuting in May, ($1,200). 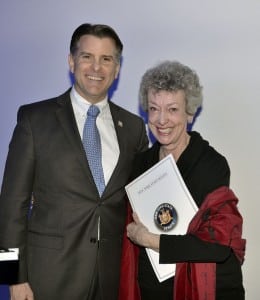 The dignitaries were then introduced, headed by New York State Sen. Terry Gipson, 41st district, who referred to his background as a theatrical set designer before stating: “As a state senator I do understand the power of creativity. I understand what it takes to try to work with artists — you know how difficult that can be! Many years ago people here in the city of Beacon did that, through the power of imagination and creativity. The person who led that charge is here tonight: Linda Hubbard.”

Gipson presented Hubbard with a New York State proclamation, telling her that it was for “the importance of what you have done. You have set an example of what people in New York State should be following.”

Beacon’s Mayor Randy Casale followed, stating: “There’s been a transformation from being a city driven from industrialization to the arts. Linda Hubbard pioneered the west end of Main Street. Beacon Arts and its board help make our community one of the best cities in the Hudson Valley.”

Casale, too, brought along a proclamation, proclaiming Feb. 27, 2014, as “hereby dedicated in honor of Ms. Linda Hubbard.” Mary Kay Vrba, executive director of Dutchess County Tourism extended these thoughts with “We all know that Linda Hubbard is a cheerleader for the arts. She ‘gets’ that tourism and the arts are partners.”

Charlie North, president of Dutchess County Regional Chamber of Commerce continued the thread: “I’ve known Linda Hubbard for a long time … The arts are the magnet that brings in the business. Go into any renaissance in any city in the USA and it’s because of the arts. There’s always a leader and that’s Linda: silent, but deadly; speaks softly, carries a big stick. She’s an example of a consummate volunteer, an example of what a leader is: a mensch.” And thereupon, yet another proclamation was presented to Hubbard.

Introduced as “past president of Beacon Arts, current pooh-bah of the Samuel Dorsky Museum” Sara Pasti was proclamation-free, noting: “I don’t have a proclamation, but I have a huge amount of love … Here’s how Linda came to be president … I was looking for someone to replace me. The main thing, which made me realize she was the right person for the job, was that she answered emails right away, at 1 a.m. … There’s a tradition that everyone always says no, then turns out to be great.”

Pasti then listed several “things Linda did” while president, including overseeing the launching of Beacon Open Studios, RiverFest, the “Electric Projected” project, the Beacon Arts Awards themselves and, overall, “bringing in so many individual artists, not just businesses.”

A Sound and Movement performance to Bach, by Susan Osberg, dancer, and Kathleen Patrick, violinist, drew the audience into a hushed focus, before Dan Rigney, current Beacon Arts president, introduced the board and then made the presentation of the Beacon Arts Award to Hubbard, who, after expressing “Wow, I’m just so delighted,” went on to describe her outfit, sourced wholly by Beacon merchants, down to her “shoes by Mountaintops, body by Beacon Pilates” — drawing spirited applause.

Hubbard allowed that, “I’ve been known to nudge. We plow through agendas; I’ve given assignments.  My ‘I have an idea’ emails make people nervous. I have loved every single minute of it. We’ve come a long way, baby.”

Hubbard concluded her remarks by mentioning that she babysat her grandsons two days a week and often read them the well known children’s book, Brown Bear, Brown Bear, What Do You See? by Eric Carle. Hubbard then substituted a round-up of Beacon cultural and civic entities  in her rendition of the text (see below).

In the aftermath of the evening honoring her, Hubbard reflected on it, saying, “I am in awe of the people assembled at Dia:Beacon Thursday night for the Beacon Arts Awards and the performers that shared their talent with us. I am in awe of the setting — Dia:Beacon — the Dan Flavin room — the light. But most of all I am in awe of the spirit of community that was present — people working together to support the arts and build a community; the BeaconArts organization that works so hard to support the arts. I am so honored to be recognized by this amazing assembly of people.”

Beacon Arts, BA — what do you see?

Hudson Beach Glass, HBG — what do you see?

We see Dia:Beacon surrounding us with art, putting Beacon on the international art map and working to connect with Main Street.

RoundHouse, RH — what do you see?

We see Scenic Hudson beautifying the land by the river, creating parks for us to enjoy and mountain paths to hike.

Scenic Hudson, SH — what do you see?

We see musicians playing on the shore of the Hudson in Rhythm on the River and Beacon Riverfest, and in old & new music venues on Main Street plus the Beacon Jazz festival.

Musicians, M — what do you see?

We see actors, dancers & poets performing at the Beacon Theater, Howland Cultural Center and at the Beacon Independent Film Festival.

Artists, Artists — what do you see?

Businesses, B — what do you see?

We see a City Government clearing the snow, supporting us, and working with us all.

Mayor, Mayor — what do you see?

I see a pretty special Beacon Arts organization helping us focus on the arts and building a community and working with Art Along the Hudson to promote the whole area.

See also: As the Crow Flies: An Aerial Perspective of the Hudson