The Howland Cultural Center is celebrating Women’s History Month with an art show, Women Artists of Beacon, featuring the work of 21 Beacon area women artists. The show opened last weekend on Saturday, March 3, and runs through the month of March.

At the opening reception The Paper spoke with three of the artists about their interests, themes and artistic process.

“I wanted to bring paintings that relate to women,” said Maria Lago as she stood before one of her paintings that all have a textured surface atop the painted surface. One large-scale work depicts a snake or “cosmic serpent.” Lago said in ancient pre-Christian times, the snake was a powerful symbol and celebration of women and life as opposed to the symbol of evil it later became. She likened the shape of the snake to the modern symbol for DNA marking its continued connection as a life force. 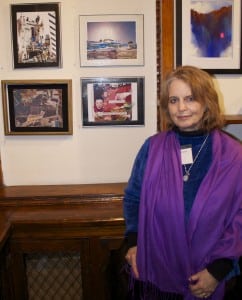 Janet Ruhe-Schoen displayed intimate mixed-media photo collages that make use of special linen photosensitive cloth ink on which she also adds ink and embroidery elements to explore her themes. In one collage she had a photo of Simone de Beauvoir, the French writer whose book The Second Sex was groundbreaking on the subject of women’s role in society in 1950, contrasted with a woman known as Nadia from Afghanistan who died in an “honor killing” over her refusal of her husband’s demand she stop writing poetry.

“I love watercolor because you relinquish control, you put water and paint on paper and it goes where you didn’t expect it to go,” said Kate Vikstrom, whose artistic endeavors include the weekly layout of The Paper. “With watercolor I like the fact that not everything has a hard edge,” she said relating this to the porous, shifting boundaries between, among other things, friends and strangers.

Some of Vikstrom’s watercolors have added elements that come from “a whole drawer full of paintings that didn’t work out.” She makes collages adding pieces from these discarded works, which “creates a different more whimsical feel.”

The show is open from 1 to 5 p.m., Thursdays through Sundays, excluding Sundays March 16 and March 30. The Howland Cultural Center is located at 477 Main St., Beacon.