I wouldn’t have bought them under normal circumstances. The biscotti from Rock Hill Bakehouse cost $5 for a package of two, a crazy sum even when I’m feeling flush. But my friend Frances had mentioned them by name when I told her I’d be stopping at a store in Sharon, Conn., after dropping our husbands at the train station so that they (the husbands) could head back to their respective jobs, like Edwardian gentlemen leaving their wives and children to holiday in the country.

Frances was our host, in other words, and we her house guests. And under those circumstances $5 didn’t seem so bad — not really outrageous at all.

Turns out it was a steal. The biscotti were without a doubt the best I’ve ever had, and big enough that we couldn’t finish one between us at a sitting. We decided to hide the remainder so the kids wouldn’t find them and polish them off. 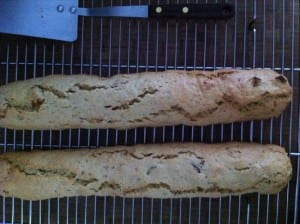 When I was a kid, no grown-ups needed to worry about hiding their biscotti from me. I could have been a biscotti guard — a biscotti eunuch! — so indifferent was I to their bland, desiccated charms. Raised on rich, buttery, brown-sugary cookies, I was baffled that anyone would bother making, let alone eating, a treat that resembled a piece of forgotten, anise-flavored toast.

But palates change. Especially when they move to New York City and start having food adventures in the company of other nascent palates. If biscotti are served at the tail end of a big, messy Italian meal with a tiny cup of espresso or a glass of vin santo for dipping in, their dryness not only stops being a liability, it becomes a great advantage. Submerged for one beat … two … three, they come to life like an Oreo, or a sea monkey. The dip in liquid is almost like the final step in the baking process, allowing the texture to develop and the flavors to blossom.

The name “biscotti” comes from the Latin bis which means twice and coctus which means cooked. “Biscuit” has the same root, though the things that qualify in the United States as biscuits — cakey cylinders sometimes served with gravy — do not reflect these origins. English biscuits, hard cookies taken with tea, are a more faithful rendition, as are ships’ biscuits and army biscuits, both of which were traditionally overbaked so as to last a long, long time. To further confuse the nomenclature, in Italy, where the things we call biscotti originated, the word “biscotti” refers not to sliced, twice-baked rusks, but to cookies of all shapes and flavors. 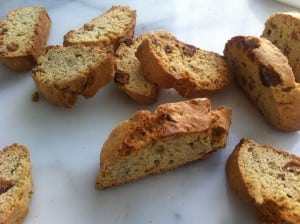 These days, biscotti (the American versions) are less like hardtack and more like cookies than they were when I was a kid, and not difficult to fall for. You can find them dipped in chocolate and sprinkles, and filled with equally gaudy ingredients. I am no purist — I adore Rock Hill’s maple-walnut version, and their chocolate-macadamia ones are pretty heavenly, too — but when a bakery starts adding mini-M&Ms to a biscotti’s thick chocolate shell, perhaps it’s time to admit that it is not really biscotti they are hawking, but candy on a stick.

To each his own. Me, I remained fixated on Rock Hill’s version after we returned home from Frances’, and began plotting ways to get myself into Manhattan on a Saturday so that I could acquire a stash from the Union Square greenmarket. But my Saturdays would not accommodate, so I decided to bake some instead. I found an excellent recipe, and made a batch with almonds and apricots, and another with hazelnuts and dried cherries. You can use whatever combination of fruits, nuts, and/or chocolate you like, and alter the booze to match (bourbon is nice with walnuts, brandy with almonds, kirsch with chocolate) — or leave it out entirely.

Biscotti improve with age, so I had to wait a couple days to decide if mine were as good as Rock Hill’s. The thrilling truth? Not quite! But almost. Which is a good thing, because my kids like them enough to have one or two for a snack after school, but not so much that I need to bother hiding them — which means there will be one left for me.

You can use any combination of fruits and nuts to total one cup combined, and substitute your favorite liquor for the bourbon or brandy (or replace it with an extra tablespoon of vanilla). Standing the sliced biscotti on end for the second baking (step 5) helps them dry out evenly without browning.

¼ cup bourbon, brandy, or other liqueur (see note above)

2 thoughts on “Mouths to Feed: Hiding in Plain Sight”