Kurt Rhoads will direct two staged readings of The Extremists by C.J. Hopkins. The  two-person show features Rhoads and Brian Dykstra. Performances will take place on Saturday, March 22, at 3 p.m. at the Butterfield Library, Cold Spring, and at 7 p.m. at the Beacon Institute, Beacon. There is a suggested donation of $10. The readings were originally planned for Dec. 14, 2013, but were postponed due to a snowstorm. 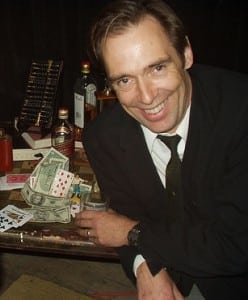 “The Extremists is a political satire that turns out to be more than it appears,” Rhoads says. “This 80-minute one-act play darkly explores the motives behind the news, broadcasts and pundits. Absurd, insane and terrifying, it is unlike anything you’ve ever seen before. This performance may be inappropriate for children 13 and under.”

Rhoads is an actor, director and co-founder of TrueNorth Theatre Project. Most recently he played the Duke in Measure for Measure at The Shakespeare Theatre in Washington, D.C. Other roles there include Antony in both Antony and Cleopatra and Julius Caesar; and Clarence in Richard III. He has acted and directed at Hudson Valley Shakespeare Festival for 16 seasons. He and his wife, actress Nance Williamson, have done 58 plays together.

Dykstra is an actor, playwright and HBO Def Poet. Most recently he portrayed Lord Capulet in Romeo and Juliet at The Folger Shakespeare Library in Washington, D.C. Previously he appeared in Lucky Guy with Tom Hanks on Broadway. Film and television work includes Def Poetry on HBO, Chappelle’s Show, Knight and Day, Freedomland, Corn, Third Watch and Law & Order. 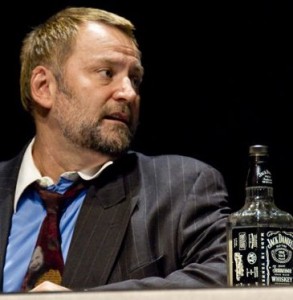 C.J. Hopkins is an American playwright. His award-winning plays have been produced and have toured internationally.

TrueNorth Theatre Project is a non-profit organization of local theater artists dedicated to bringing new and under-produced works to the Hudson Valley.