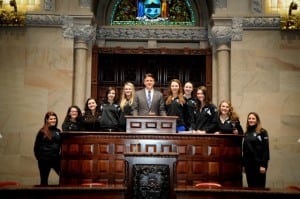 New York State Sen. Terry Gipson (D-Dutchess, Putnam) welcomed student athletes and coaches from the Haldane High School Girls Volleyball Class-D State Championship team to the State Capitol on March 12. The State Senate passed a resolution, introduced by Sen. Gipson, commemorating their championship season. The Blue Devils volleyball team was invited onto the Senate floor where Gipson signed and presented them with a copy of the resolution.

“You have made the 41st Senate District proud, Putnam County proud and the Haldane community proud,” Gipson said. “Today, the New York State Senate shows how proud we are to have you represent our great state as champions.”

Gipson concluded: “I applaud these exceptional student athletes, leaders and gracious winners, and I look forward to their bright futures.”