Maybe you’ve noticed that metal buckets have started to appear on maple trees this week. Maple syrup season is about to begin. Maple trees dominate the landscape around here and I was curious to learn more about this interaction with our native trees. John Stowell, the Parks Supervisor at the Taconic Outdoor Education Center, answered a few questions. Gathering sap from maples is done by tapping the tree, making a small round hole with a drill and fitting it with a hollow spile, like a straw. It allows the sap to be drained into a container.

How does it work and why does the tree produce sap?

Stowell: The pull and push of gravity moves the sap through the tree’s phloem and xylem. The temperature triggers it. The stored product is drawn up by the tree when it gets above 35-40 degrees and when it cools down at night, it goes back down.

Why is it okay to take sap from a tree? Doesn’t the tree need all its food?

We take such a small amount of all the sap the tree produces that it doesn’t harm the tree. The buds still get enough food. We follow the guidelines, too, and only tap trees that are at least 40 years old and 10 inches in diameter. For each additional 10 inches of diameter, you can add one more tap up to a total of four for a 200-year-old tree.

Will tapping harm a tree? Does the hole open a wound in the tree?

The hole seals afterward. I can show you trees that I’ve tapped many times repeatedly over the years and you wouldn’t find any evidence. Nature heals itself. The only way to really damage a tree is if you completely girdled it, cutting into the first inch or so chokes the tree and kills it. 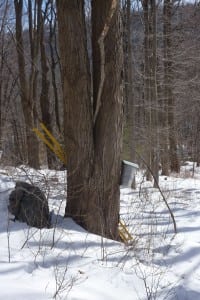 A spile and bucket attached to a sugar maple tree to gather sap for maple syrup.
(Photo by P. Doan)

Why are sugar maples used for maple syrup and not other trees? Many trees produce sap.

So temperature fluctuations between daytime and nighttime trigger the tree to produce sap, but why?

Trees also respond to light, but the reintroduction of cold and warm temperatures after the winter tells the tree to feed the buds. Eventually all the tree’s energy will be used to feed the leaves and you can’t take sap from it any longer. There’s a short window in the spring when you can get the sap.

This winter has been colder and seems longer than usual, too. How has that affected tapping?

No sap has run yet. On average, that’s very late. For the past 14 out of 15 years I’ve boiled sap by now and this year I haven’t even been able to tap yet.

To learn more and see Stowell’s efforts firsthand, visit the TOEC this Sunday March 9, for their Maple Sunday Pancake Breakfast from 8:30 a.m. to noon. Visit nysparks.com.

Philipstown resident James Davey is tapping my neighbor’s sugar maples across the road. He said, “I’m expecting to see a decent run starting this weekend. It’s a very small operation. I’ve got about 16 taps out and that will bring in about five gallons of syrup.”

Due to climate change, studies have shown that sugar maple production in our area could drastically change over the next 100 years. A study by Brian Chabot, professor of ecology and evolutionary biology at Cornell University, forecast that sap could run as early as Christmas by the year 2100 and that there would be fewer flow days. Another study co-authored by Arthur DeGaetano, a Cornell earth and atmospheric scientist, showed that some areas would not have enough days with freezing temperatures to gather sap at all.