Antipodean Books of Garrison hosted an engrossing and entertaining discussion on the evening of Sunday, March 9, focusing on the events leading to the signing of the Declaration of Independence. The presentation, which was sponsored by the Outreach Committee of the Philipstown Democrats, followed the Depot Theatre’s late afternoon performance of 1776, and was given by West Point Command Historian Sherman L. Fleek.

Speaking to a standing-room-only audience, the retired U.S. Army lieutenant colonel brought a unique and often humorous perspective to the early days of the American Revolution, pointing out the various ways that — except for victories at the beginning and end — 1776 was a disastrous year militarily for the Patriots. “But,” he added, “it was the year in which we codified and ratified our official Declaration of Independence from Great Britain.”

Although George Washington lost practically every battle he fought, Fleek named him as the most successful general in American history, citing Washington’s initiative as the single greatest impetus behind the nation’s victory. “It’s not about the number of victories,” he explained.

“We won practically all the battles in Vietnam, including the Tet Offensive,” Fleek observed, “but we lost the political war. Washington, on the other hand, was adept at intelligence gathering and espionage, and was politically astute. Despite the fact that only around one-third of the colonists were behind the Revolution, he sustained the momentum.” 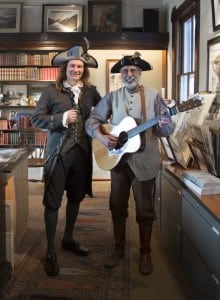 At one point in his talk, Fleek asked Mike McKee, chairman of the outreach committee, to read a flowery and emotional letter written by John Adams to his wife, Abigail. Adams, it seems, was convinced that July 2 — the day on which the various colonies verbally agreed to declare independence from Great Britain — would go down as the new nation’s most celebrated day.

“I am apt to believe,” he wrote, “that it will be celebrated, by succeeding Generations, as the great anniversary Festival. It ought to be commemorated, as the Day of Deliverance by solemn Acts of Devotion to God Almighty. It ought to be solemnized with Pomp and Parade, with Shews, Games, Sports, Guns, Bells, Bonfires and Illuminations from one End of this Continent to the other from this Time forward forever more.”

Although accurate in his belief, he missed the date by two days, little suspecting that the actual writing and signing of the document two days later would garner that honor. Such interesting facts as these enlivened the presentation, and provided a human touch to well-known historical events.

Fleek informed his audience that — contrary to popular belief — the first flag carried by the Patriots in the war bore the British Union Jack. The American rebels, it seems, were hopeful of a peaceful reconciliation with the mother country, even as they were engaging its army in mortal combat. Only after a restoration of friendly relations proved impossible did the colonists replace the British icon with the now-familiar stars representing the individual colonies.

Although a Utah native whose main academic focus is Mormon history (“As I always say,” he intoned in his booming voice, “If you’re gonna bring ‘em, bring ‘em young!”), Fleek is extremely well acquainted with the history of the Hudson Valley. Clearly, so were many in the audience, as the questions he threw out were fielded swiftly and accurately by many enthusiastic voices. The exchanges were lively, the audience involved, and the presentation well received.

Following Fleek’s presentation, Jonathan Kruk and Rich Bala — two singer/storytellers who perform as the Hudson River Ramblers — entertained the audience with a musical history of the ubiquitous Revolutionary War song, Yankee Doodle. The song was sung extensively by both sides throughout the war, and by the Patriots as a final insult to the British when they surrendered to Washington at Yorktown. Apparently, the word “Yankee,” which today holds various connotations, derives from the Dutch words meaning, “stinky cheese!”

The Ramblers are a familiar duo in the area, having appeared extensively at local schools and events. “We perform stories and songs of the Hudson River,” says Kruk, “from Lake Tear of the Clouds to the Verrazano-Narrows, from Henry Hudson to Pete Seeger. We tell the stories behind the songs.” The performance, which included singing on the part of the audience, provided a rousing and appropriate close to the evening’s program.

Lithgow Osborne, treasurer of the Philipstown Democrats, says of the evening:

The Outreach Committee had wanted to host a series of events for some time, to connect with people interested in discussing democratic — small ‘d’ — principals. We were seeking an informal but informative entertainment, and the staging of 1776 here in Garrison provided the perfect opportunity to present the background to the signing of the Declaration. We were looking to raise our visibility, but also to engage the public in a more creative way — to involve our neighbors in events with an historic, if slightly political, aspect.

Adds Committee Chairman Mike McKee, who doubles as Benjamin Franklin in the local production: “We couldn’t be happier with the turnout and the response. We were hoping for 20 or 25 attendees, and 66 people attended. We look forward to sponsoring other such events in the near future.”