The Butterfield project took a significant step forward at the Tuesday (March 11) meeting of the Cold Spring Village Board. Members of the Cold Spring Planning Board sat with village trustees as Planning Board Chair Barney Molloy presented a copy of the board’s recommendations on the proposed B4A zoning amendment to Mayor Ralph Falloon, drawing applause from the near-capacity audience.

The zoning change is required before redevelopment of the former hospital site can begin. Potential mixed uses on the site include retail, commercial, single-family housing, senior housing and community center and government offices. Molloy said that the Planning Board’s review of the B4A zoning included 14 meetings held over several months. The Village Board will now consider the recommendations.

The Planning Board memo states that after working on the project for five months: “We now have a clearer understanding of what … B4A would mean for Cold Spring.” It outlines concerns and recommendations in such areas as scale of buildings, flexibility in reviewing the concept plan, setbacks from Route 9D, public park access and additional recommendations from the Comprehensive Plan. 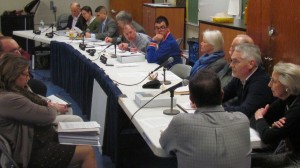 Members of the Cold Spring Planning Board attended Tuesday’s Village Board meeting and submitted recommendations on proposed B4A zoning for Butterfield. (Photo by M. Turton)

Chuck Voss, consultant to the Planning Board, reviewed highlights contained in the memo including the statement that the Planning Board hopes village trustees will “reexamine priorities for Butterfield” including the preference for underground parking; whether open space preservation should be prioritized; the balance between commercial and residential uses and the possibility of more varied or expanded commercial uses as well as the best approach for achieving a tax-positive outcome.

In seeking flexibility for the review of the concept plan, the memo further states: “The Planning Board and Applicant both agree that the standards for the exercise of such discretion must be clearly stated so that there is no confusion about the Planning Board’s role and authority.”

Trustees approved holding a public hearing on the proposed B4A zoning on Tuesday, April 15. The complete memo outlining the Planning Board’s recommendations can be viewed on the village website at coldspringny.gov.

Charles Hustis III attended his last meeting of the Cold Spring Village Board — at least as a trustee. Hustis served two terms but is not seeking reelection in next week’s vote. After being thanked by Mayor Falloon for his hard work, Hustis went out with a flair, singing his unique adaptation of Thanks for the Memories.

Trustees also accepted the resignation of Donald H. MacDonald, long-serving Village of Cold Spring and Town of Philipstown historian. In his letter MacDonald said: “Serving my Village and Town in so satisfying and interesting fashion has proven an endeavor of warm, personal regard, while assisting in further perpetuation of our county, town and village historical attributes.”

Falloon referenced recent criticisms in the ongoing election campaign regarding the village’s ability to complete projects in a timely manner, noting that most village boards depend on volunteers to complete work. Volunteers are currently needed for the newly established Main Street Lighting and Parking Committees which to date have heard from only three potential members. At Trustee Stephanie Hawkins’ request an additional spot was added to the Tree Advisory Committee.