Author Patrick O’Keeffe, whose critically acclaimed debut collection of novellas The Hill Road won the Story Prize in 2005, released his first novel, The Visitors, this March 13. Inspired by the places O’Keeffe knows well, the story traces the journey of immigrant James Dwyer from rural Ireland to the U.S., with a visit to the Hudson Highlands as the setting for the book’s conclusion.

Visited by the past

Like O’Keeffe, The Visitors narrator James grew up on a farm in rural County Limerick, worked as a bartender in Dublin, moved to Boston, studied in Ann Arbor, Mich., and spent time in the Hudson Valley, though O’Keeffe is quick to clarify that while many of the places in the book are very real, the plot and characters are not. 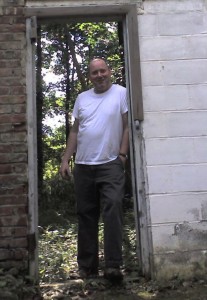 Throughout the novel, the deep connections between the Dwyers and their hometown neighbors, the Lyons, as well as those of James to his own family, unfold through haunting memories, like a past that follows him across the ocean to his new life. His emotionally distant father and Kevin Lyons’ father were best friends, but no such friendship ever bloomed between James and Kevin, even when they both lived in Boston around the same time. In fact, the charisma of the Lyons boy has always overshadowed the more awkward James, who remembers being bullied by Kevin as a child and who, as an adult, finds nothing in common with him.

Yet their lives are still intertwined, from Kevin’s relationship with James’ sister and James’ own relationship with Kevin’s sister, to the friendships between their brothers and their fathers, and finally to more deeply held secrets that James only discovers much later.

Despite James’ aversion to Kevin, the two must eventually meet. The novel begins when a stranger shows up at James’ door in Ann Arbor and later divulges the message that Kevin wants James to visit him in the Hudson Valley. Intent on not going, James eventually gives in when urged to by his sister, after tragedy strikes the Lyons family.

Once in Philipstown, James cannot resist the beauty of its setting: “I visited the house in the woods. A loud stream at the end of a grassy yard surrounded by very tall trees. A stone wall going up at the end of the yard. A wide deck on one side of the house and a porch at the front. The windows are huge and bare and the house and the trees are one.”

The house in the woods

O’Keeffe dedicated The Visitors to his good friends and former Philipstown residents Tom and Kathy Zeller, not only because of their support through the years he spent writing it, but because the charming house where they lived from 2008 to 2013 so inspired O’Keeffe that he felt compelled to include it in the novel. 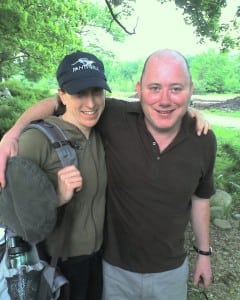 To the author, who now teaches fiction writing at Ohio University, the Zellers’ home became a nice getaway, especially when O’Keeffe lived and taught upstate at Colgate University (2008–2010). As in the book, trees surrounded the house off Route 301, with the stream in front and hiking trails connecting to the Clarence Fahnestock State Park in back.

In the warm months, the foliage curtained the property from the road and neighboring houses, becoming a haven for O’Keeffe and the owners alike, who commuted part of the week to their jobs in New York City and, like many Philipstown residents, had gotten tired of city life and craved the outdoors.

Indeed, Kevin, the fictitious owner of the house, describes it lovingly: “The first time I drove down the gravel road and over that bridge I opened the car window and saw and heard the stream. Then I looked up the yard at this porch and this tidy wooden house and the big window behind you and I knew I had found it.”

This echoes the description given by former owner Tom Zeller, who was in no way the basis for the character but who adored the place just as much. “We loved that house and we loved the Hudson Valley. Fahnestock and Glynwood Farm were our backyard, and it always felt like a secret place somehow — rustic and rural and woodsy, but still within the orbit of New York City. We must have looked at three or four dozen homes in Westchester and Putnam before stumbling onto that property, and we knew immediately when we did that this was the spot.” 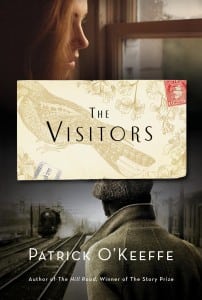 The house was even featured in The New York Times’ environmental blog, of which Tom Zeller was editor, when they documented renovations in a “Home Green Home” video series, showing how to make houses more energy efficient while on a budget.

The Zellers still wax nostalgic about the house since they moved to Massachusetts last year, Kathy to finish her Ph.D. in wildlife biology at the University of Massachusetts in Amherst and Tom to do a yearlong Knight Science Journalism Fellowship at the Massachusetts Institute of Technology.

“It was hard to let it go,” continued Tom Zeller, “both for us and for Patrick, who spent many good times with us there and came to love the place at least as much, if not more, than we did.”

O’Keeffe even helped paint the house before they had moved in completely. He fondly recalled other visits in the years that followed — including the annual “Boccenalia” parties that the Zellers held each year over the Memorial Day weekend. (Full disclosure: This reporter was occasionally a guest at these gatherings.) “I loved the house,” said O’Keeffe. “I loved the hikes and walking through the fields; I loved the village, going for Bloody Marys at Whistling Willie’s. It was just a beautiful place to hang out.”

Though the final violent conclusion of the novel doesn’t at all mirror O’Keeffe’s real experiences in Philipstown, readers can still tell that the place seemed to cast a similar spell upon his characters.

Abounding in rich details and humorous as well as tragic tales, from the Dublin bar where James worked to the immigrants who had entered the country illegally trying to make a living in Boston, the novel expands O’Keeffe’s literary world outside of the Irish farmland that serves as the backdrop to the stories in The Hill Road. Both books are now available from Viking/Penguin.