Your vote counts. That’s one undeniable lesson to be taken from Michael Bowman and Cathryn Fadde’s win in the Village of Cold Spring election for two trustee seats on March 18 (Tuesday). Running as the “BOFA” team, Bowman and Fadde earned 398 and 395 votes respectively in defeating first-time candidate Donald MacDonald and incumbent Matt Francisco, who garnered 378 and 362 votes respectively. Mary Saari, clerk for the Village of Cold Spring, indicated that 1,411 residents were eligible to vote.

For 45 minutes after voting ended, reporters, a few members of the Cold Spring Fire Company and a handful of other onlookers waited rather nervously in the fire hall garage, while next door, election officials went about the business of finalizing the count. Tallying the votes using electronic voting machines provided by Putnam County took only the push of a button. However, the paper ballots used in absentee voting had to be counted manually, and only after the electronic count had been determined, in order to ensure that no one who submitted an absentee ballot had voted twice. Once that task was completed and verified, the final results were read aloud.

Absentee ballots made a difference

Absentee ballots played a much more significant role than in the 2013 election, when only 37 such votes were cast. In Tuesday’s election, more than double that number, 76 absentee ballots, were counted. Bowman and Fadde were the big winners, collecting 46 and 43 votes respectively from the absentee ballots, while MacDonald and Francisco collected only 26 and 23 votes respectively. Had those numbers been reversed, MacDonald and Francisco would have been the top two vote getters.

Immediately after the results were announced, Bowman told The Paper that he is looking forward to working with the new Village Board. “I think it was a very dark election,” he said, adding that one of his first priorities will be to “extend an olive branch” to those who opposed him. 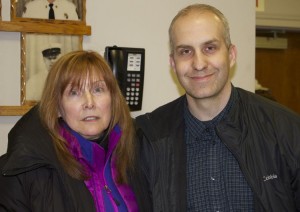 Cathryn Fadde and Michael Bowman immediately after hearing of their victory at the Cold Spring Firehouse (Photo by Kevin E. Foley)

Fadde said she felt that BOFA’s door-to-door campaign had an impact. “We talked to a lot of people, and we listened,” she said. “And we’re not going to let people down.”

MacDonald, who chairs the Zoning Board of Appeals, seemed unfazed by the loss. “This was the first time I put myself out there … and it was a wonderful experience,” he said. “I want to thank everyone who voted and all those who supported us.”

“I think it was great. It was the democratic process in action … and there was a big turnout,” Francisco said, just minutes after learning that he had not been returned to office. “I’m looking forward to getting back to private life,” he said, quickly adding, “but you’ll still see me at meetings.”

The night was vindication for Bowman, who last March promised, “I will be back,” after being edged out by only nine votes by Stephanie Hawkins in his first run for the Village Board. Bowman collected 310 votes in 2013. In topping the polls with 398 votes in Tuesday’s election, he increased that total by 28 percent. In contrast, when Francisco was elected in 2012, he received 401 votes. The 362 votes he received in 2014 was a 10 percent decline.

The newly constituted Village Board will meet for the first time in early April. According to Saari, the current board will meet at least once and possibly twice before Bowman and Fadde are sworn in.