Just as beauty is in the eye of the beholder, so goes a weed. One gardener’s weed may be another gardener’s centerpiece. Personally, I have a fondness for Queen Anne’s lace. It grew on roadsides and in our fields where I grew up and I’d make bouquets that no one appreciated but my great-grandmother, who also delighted in its delicate white flowers. When I asked the florist to get them for me to adorn tables at my wedding, I know I paid for someone to drive upstate and gather it from a roadside, but it looked lovely in a vase with daisies and hydrangeas. (Feel free to steal that design.) 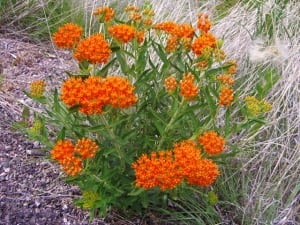 Nostalgia aside, here’s why I’ve been on the hunt for weed seeds to plant in my yard this year: Monarchs. The number of Monarch butterflies has been desperately falling every year. Recently, the New York Times reported that the population that migrated south to Mexico this year was 56 percent lower than it was last year, and 2013 was considered to be the smallest population recorded. For perspective, in 1996 Monarchs covered 45 acres of forest, what a sight that must have been. This year, however, their numbers have shrunk to less than two acres, the new record low. The count has been taken since 1993 and marks the conclusion of a 2,500-mile migration Monarchs undertake every year to overwinter in a warm climate.

Monarch populations are being affected by a few significant factors. Dependent on certain plants, they only lay eggs on milkweed and the larva feed on the leaves, Monarchs have significantly lost most of their habitat. The increased use of herbicide resistant plants has led to more spraying of weeds by farmers, killing off milkweed. Transportation crews along roads and highways also spray it along with everything else in their path. While these practices are effective in mass control of weeds, they take out the beneficial and native plants and grasses that are habitats for other beneficial insects, too. Milkweed is just one that happens to sustain a particularly beautiful insect whose loss we’re feeling.

Unpredictable weather patterns also impact Monarchs, mainly caused by our changing climate. Cold snaps during their migration south can cause large die-offs. Researchers seem to agree that habitat loss is the greatest threat, though. Extreme temperatures on both ends of the spectrum throw their cycle out of balance. Early spring warming signals the Monarchs to move north when they’re more vulnerable to a shift back to cold temperatures again.

Project Milkweed, a Xerces Society effort with support from USDA Natural Resources Conservation Service, is sourcing seeds to restore milkweed by concentrating on the main breeding grounds in states to the south and west — California, the Great Basin, Arizona, New Mexico, Texas, and Florida. The seeds seem to be hard to come by and part of the effort is to gather seeds to repopulate areas most beneficial to the Monarchs.

Locally, I can’t recall when I last saw milkweed growing in our forests or near streams unless it was a protected area like a park that intentionally conserved milkweed. The fuzzy pods are distinctive, letting loose woolly seeds after they bloom. Deer and rabbits would browse young plants, but typically not full-grown milkweed, according to deer-resistant plant lists. Many parts of Philipstown are high-browse areas, though, where deer aren’t following the guidelines. If you know your landscape is vulnerable, the plants will have to be protected.

Seeds and plants have been difficult to find, though. At their plant sale in April, the Native Plant Center will have Asclepias incarnate or swamp milkweed for sale. It’s native to our area and is a host plant for a species of moth as well as Monarchs and beneficial to bees, too. Online at Johnnyseeds.com, I found seeds for Asclepias tuberosa also known as pleurisy root, another native milkweed for our area that has colorful orange and red flowers and herbal uses, as well. Wildflower.org, a great resource for native plants, shows 13 different native species for New York with common names listed, too. The Seed Savers Exchange lists two that are suitable on their website, including Asclepias rubra or red milkweed.

Milkweeds can tolerate different growing conditions. Finding one that can tolerate the growing conditions in your landscape shouldn’t be too difficult. They would complement many different plantings. The flowers are showy and the plants are usually taller, in the range of 12 to 48 inches in height. If hosting butterflies is the aim, though, understand that caterpillars will chew the leaves up. That’s the point!

2 thoughts on “Roots and Shoots: Do It for the Butterflies”