“Every great town needs a little general store.” So stated Deanna Muraszewski who, with her husband Craig, aims to provide this town with just that, in the form of their new business, Cold Spring General Store (CSGS), opening shortly in the former Old Souls space at 61 Main. (Old Souls, meanwhile, is expanding to larger premises next door.)

CSGS will be stocked with goods that they hope “people will create their connection with,” explained Deanna. There will be an equal mix of perishable and nonperishable goods, most of which will be foods reflective of both Muraszewskis’ backgrounds in the hospitality business. (They met while working in a restaurant.)

“We think of ourselves as locally sourced and mindfully chosen providers … and we’re trying for all made in the U.S., handmade where possible and telling a story,” said Deanna. Craig added, “We’ve sought out a certain standard of care in terms of the people making the goods. We want products without GMOs or caramel coloring — things to enjoy without feeling guilty.” 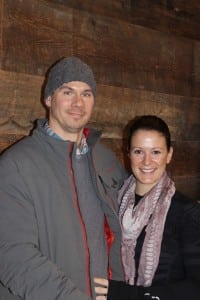 2013 was a big year of change for the Muraszewskis. They got married, moved to Cold Spring and decided to start a business. Craig grew up in Carmel, and they had good friends here, resulting in years of visits here from Westchester, where they were living, attending parades and parties, becoming acquainted with the town and feeling it was right for them.

“Every time we came it felt like home,” said Deanna. But that new home “felt like something was missing, as far as where to go to get locally made things, because there are so many people here and around here making things. Craig and I fell in love through food and we kept feeling there was nothing here which ‘said’ Cold Spring or the Hudson Valley — that’s where the idea for the store came from.”

Their backgrounds in the food and hospitality industries serve them well for this new endeavor — Craig has been working in the hospitality industry since he was 15 and formerly worked at Thomas Keller’s restaurant Per Se in New York City, at the Four Seasons before that and also at hotels. Deanna has a media background, which she can put to use in promoting their business. The restaurant at which they met, Larchmont’s Plates on the Park, was “very much a farm-to-table type of place — we learned so much there; it was at the beginning of that whole movement,” said Deanna.

The timing worked out well in their quest for a small space in which to begin. “It’s ideal to start from,” said Craig. Choosing their stock came naturally to them as “over the years we’ve been known for our lists — of farmers, fishermen, people whom you can call up and say, ‘Hey Bob, I’ve got a customer with me who is interested in … ’ We have direct links to products, and the people who make those products, and their families.” Deanna calls CSGS “the opposite of a Big Box store.”

Some of their suppliers will be Glynwood Farm, Overcreek Farm for salad greens and Garrison’s Long Hand Farm for vegetables. Perry’s Pickles, found at the Cold Spring Farmers’ Market on Saturdays, will be available at the store, too. The Muraszewskis emphasize that they don’t want to encroach on the Farmers’ Market but see them as complementary, with one a weekend destination of sorts and their store a place to buy some similar items over the week. (They haven’t set their hours yet but expect to be open on the late side to accommodate commuters returning home needing things for dinner.) 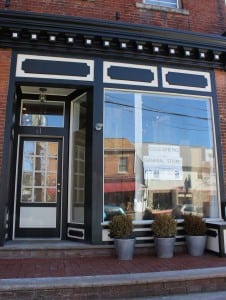 They’ll also be stocking other goods in the building right next door, once a garage, which they’ve dubbed “The Barn.” There they’ll have a seasonal selection of things like grill accessories, charcoal, walking sticks, even birdhouses.

Asked if they received “You shouldn’t, because of the slow winters” advice from people before deciding to pursue their business, they both nodded, with Deanna saying, “Oh yes! We had lots of people sharing their insights.” But, while listening, they persevered.

“At the end of the day,” noted Craig, “if the whole community is thriving, people will come, year-round. There are 200,000 people coming to Fahnestock each winter. If we can link up with Glynwood dinners and other things, change can happen. It’s tough to break the mold, but we think it’s possible.”

Plans are for a hard opening on April 1, with a soft opening sometime between now and then. A visit on March 18 revealed shelving made from reclaimed wood salvaged from an early 1800s barn, and a newly built (by Craig) register area, again all wood. Amid boxes of stock yet to be opened were two of the objects they will offer for sale — one a beer growler (bottle to carry beer in) made by Plan B Brewery with 100 percent New York products, from label to hops and, as Craig said, “supporting another family.” 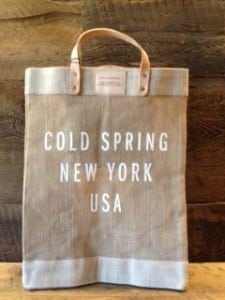 The other is the reusable jute Cold Spring General Store Market Bag, handcrafted in Bangladesh as part of the “Bangladesh Project” with a waterproof lining geared toward carrying rinsed vegetables from market to home, with a percentage of profits directed back to women’s initiatives in Bangladesh.

Other products are displayed on their new Facebook page, including candles from the Bee Man Candle Co., located in New York, and Massaman-curry, peanut-butter sandwich cookies made by Whimsy and Spice of Brooklyn.

Eventually, the goal is to expand and offer prepared foods as well, but for now the Muraszewskis are excited to open their doors to locals and visitors and welcome them to their General Store. Check with their constantly refreshed Facebook and Instagram pages for updates on the opening, and a website will be up and running soon as well.

One thought on “Cold Spring General Store Prepares to Open”