Odell outlined her plans March 13 in the annual State of the County Address in which she also announced a new Putnam Cares program that features a cell-phone application or “app” to help prevent suicides and assist residents in coping with other emergencies.

Delivered at the Putnam County Golf Course, her “Pathways to the Future” address consisted of a 235-slide power-point presentation that lasted about 90 minutes. Odell seeks re-election this year and her campaign is promoting the video of her address and related materials online.

Along with her agenda, she cited her administration’s accomplishments in her 900 days in office, including repairs to roads and other infrastructure in Philipstown. Overall, she said, “we have worked every day to do one thing and that is to do the right thing for all the right reasons for all of the people of Putnam County.”

In the portion of her talk devoted to senior citizen issues and her “Year of the Senior,” Odell referred to the proposed Butterfield redevelopment in Cold Spring. “We believe in Butterfield,” Odell said. “It’s important to our seniors because our seniors on the ‘west coast’ as I refer to it have been gathering in a dated facility that does not provide them with the opportunities that some of our other senior centers do. With the hope and promise of Butterfield, we will have a new state-of-the-art senior center. And this project will put people back to work and it may very well save the village post office.”

Moreover, she said, “It will be [bringing] satellite county services.” As examples, she named the tourism office, sheriff’s department, and units of the county clerk’s and personnel offices. “All of these will save taxpayers money and generate revenue,” Odell predicted. Beyond that, she said, Butterfield represents $431,000 in increased property and sales tax revenue, which “will certainly help the tax burden” of residents. 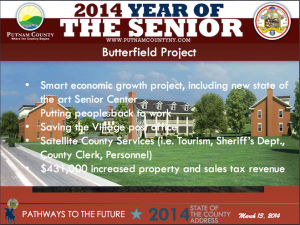 A State of the County Address slide showed the promotional drawing of buildings in the proposed Butterfield redevelopment.

The accompanying slide showed the color drawing of proposed buildings used by developer Paul Guillaro to promote his venture. Odell also mentioned local residents Roger and Elizabeth Ailes, who “graciously provided Putnam County with $500,000 … toward the costs of building this new senior center.”

Highlighting related programs, Odell said that “we’ve increased the senior medical transportation fleet by five vehicles” and that the county is “redesigning the public transportation routes to meet the needs of our seniors, connecting to senior residential communities and providing senior shopping days to shopping districts, Main Street, and other requested locations, transportation hubs (rail, tourist and recreation destinations), and appointments at health-care providers.”

Furthermore, she continued, the county government will join with the County Chamber of Commerce to host open houses and “showcase our facilities and encourage more seniors to participate at our centers.” Odell said that “Putnam County has the fastest-growing over-60 population in New York State and I am committed to providing the resources needed to provide them with the services they need.”

Because “Putnam County cares and it’s our job to help those that need help before it’s too late,” Odell said the county government “designed a new app that gets information to the public at the speed of life.” The mobile app is currently available for Android devices and will shortly be available for Apple devices as well, she said. The app includes categories for emergency services and SPEAK, or the Suicide Prevention, Education, and Awareness Kit, as well as for such non-crisis interests as using county transit services, tourism, shopping, and events.

The SPEAK component is broken down into sections on suicide warning signs, what to say to someone in a crisis, and resources, such as hotlines. It also includes material specifically targeted toward teens, adults, and military veterans.

“We’ll be updating this app regularly and would love to hear from you,” Odell said. “Your comments will help provide the information you want.”

Declaring that “there is nothing more important than your privacy and safety,” Odell said she will not give up after a recent setback in the county’s attempt to keep handgun-ownership records secret. She also again criticized New York State’s comprehensive gun-control law, the 2013 NY Safe Act.

March 5, a State Supreme Court justice ruled in favor of The Journal News newspaper and against Putnam County in a case that began when County Clerk Dennis Sant refused to provide the newspaper with public records on registered pistol owners.

“Our commitment to protecting your privacy and safety was challenged” by the lawsuit, Odell said, “but my administration did not back down from this fight.” Odell argues that “release of this information would create an unprecedented public safety risk” and said the court decision “will not deter my commitment to preserve a person’s right to privacy and safety, which is why I intend to file an appeal. It is also time for Albany to recognize that the NY SAFE Act is impossibly flawed and I will continue to urge lawmakers to take our taxpayer’s privacy rights as seriously as we do here in Putnam.”

Odell touted her administration’s fiscal skills, saying that “every year I have been in office I have submitted a budget” that meets the Oct. 1 deadline and “is under the Albany tax cap,” which limits property-tax increases. While producing budgets that come in below the state cap, “we also under-spent our budget in the years 2012 and 2013,” Odell said. “We also anticipate under-spending the 2014 budget.”