“Sometimes you think you don’t remember things, but then you take part in an activity, maybe art or cooking, and it catches you off guard — the memory comes.” So spoke Kathy Curto at a gathering of the Writing and Bookbinding Workshop for Seniors, which is currently at the midpoint of a six-week session at the Friendship Center (senior citizen lunch site) in Cold Spring.

Kathy Curto, standing, displays an example of how a journal can be used.

Curto, a writer and professor of creative writing at Montclair State University, is conducting this series along with teaching artist Christina DiMarco, under the auspices of the Garrison Art Center and the Cold Spring Lion’s Club to assist seniors in developing a written piece, perhaps a memoir, short fiction or journal entries. This will then be placed into a bound book with a cover of their own design using the ancient Japanese art of suminagashi, or “floating on water.”

The group met first with DiMarco to create their covers. Over the course of two-and-a-half sessions, they produced the art then worked to fold and sew the books, binding them into journal-sized form, replete with pockets where photos or other objects can be inserted to further personalize them. For DiMarco, although she has done many previous bookbinding and marbling workshops at the Art Center, Mill Street Loft and elsewhere, this is the first time she has worked with a writer, and she has continued to attend the workshops beyond her own contribution to them, to see how Curto develops the project.

Throughout the hour-and-a-half-long session, Curto kept things flexible and positive. Participants were invited to read what they had written over the week, or not, if they didn’t wish to share. Suggestions were made as to possible forms to use: haiku, letter writing, short stories, six-word memoirs, journaling. “There are lots of ways we can go with this,” Curto said. “Even though reading and writing are solitary, they connect us with the world.”

In order to provide them with “an appetizer,” she played two examples of oral histories from StoryCorps, which she notes as being “a project which embraces the telling of stories, but also the listening to them … I chose those two because they are both poignant and powerful,” she said.

“Where did your minds and hearts go, listening to these stories?” she asked. Addressing a shift in one of the stories, she focused in on it: “At some point in a story that’s too ideal, we notice it and search for reality. I happen to believe great pieces of writing bring both the tough and the tender on the page.”

The connection between generations and the good that comes between sharing stories was discussed by the group. A woman named Mary, a first-time attendee, said that “getting children to sit down with some kind of recorder and listen to memories would be a great project for them because as we get older we’re just ‘grandma.’ … It seems to them that we were never young. … I’ve given my children journals. I say, ‘Write it down before you go to bed.’ We think we’re going to remember, but you don’t — it’s gone.”

Curto concurred and saw other benefits to it. “When someone is no longer with you, you see glimpses of them in your siblings or even your children. In this age of technology, why not use it to build a bridge with different generations? Develop a desire and appreciation for history.” DiMarco then mentioned that her sister, “very thoughtful, did a beautiful interview with my grandma, who now has dementia. We play the tape for her and it brings things back for her.”

Marie Van Valkenburg, a retired teacher from Cold Spring, volunteered to read first, sharing a sharply detailed, richly remembered and humorous account of a semi-disastrous, partially-cooked shrimp cocktail–serving adventure: “There I stood, admiring the finished results; everything looked great. My aunt and uncle arrived and were impressed. Suddenly, something was wrong.” 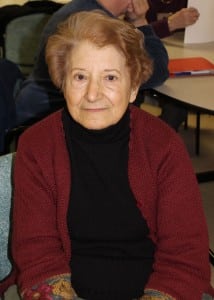 Van Valkenburg had a tangy twist of a last line to complete her tale and the “audience” applauded. Curto called it “truly a story, with momentum. You gave us important details and avoided assumptions that readers would know what was going on.” Participants offered positive assessments as well, one noting, “The conflict made it a story.”

Van Valkenburg, who made reference to “going to the A&P in Beacon,” grew up in the Bronx and came up to this area in 1955 to teach (first at Haldane, then in Beacon and, finally, at Putnam Northern Westchester BOCES), wanted to create this memoir for her family. “This story has always made my family laugh,” she said, explaining why she chose it as her subject. “It’s a family joke.” Van Valkenburg heard about these classes from her daughter and came to the Friendship Center for the first time because of them. She has thought about putting things down on paper previously: “There was a time I thought I’d love to write a memoir about teaching — I’d have liked to put it down. I’m happy people enjoyed the story today.”

After receiving a sheet of prompts, among them “The smell of a place you love” and “Put your character in the dark. See what happens” and verbal ideas — “Nicknames and the stories behind them,” the group read a handout of a poem, “After Our Daughter’s Wedding” by Ellen Bass, and discussed it and its resonance in their lives. The class wound down with an examination of the different forms haiku can take, with mention made by Curto that “sometimes it’s just as important what you don’t put down as what you do,” and a reading of a few done as “homework” from the week before: “Cheesecake rising, hot, wafting into dreams, cooling to sweet perfection,” read one, and “My new friend Naomi has a granddaughter age 13. Mine’s 12 — how great!”

Concluding, Curto offered help in scanning photos and formatting with computer software and put forth the idea that some could possibly submit their work to publications — something else she was glad to help them with.