Spring 2014 officially arrived Thursday at 12:57 p.m., but as is typical for this time of year the temperature is consistently schizophrenic.

But you can’t fool Mother Nature, and signs of life below ground are beginning to reappear. As much as we’d like to rush this process, it’s as T.S. Eliot says: The faith and the love and the hope are all in the waiting. This is a time for mindful patience, and with an attitude of quiet awareness we can move cheerfully beyond all that went before and reverentially into a new cycle of warmth, life and growth.

I had the good fortune to travel south in late January for a brief escape from the cold. We drove hoping to enjoy the change in flora, fauna and temperature as we traveled, but our first planned stop in Richmond, Va., was greeted by the city’s second major snowfall of the season: 5-6 inches of powder from the first (bi-)polar vortex of the season. After the February we’ve just had, you’re probably cynically laughing at this, but for Southerners unaccustomed to such meteorological visitations, this was a game changer. 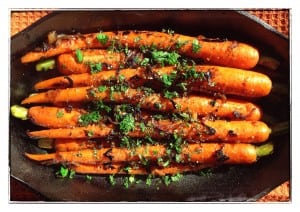 Richmond was significant on our journey as the relatively new home of former Garrison resident, friend and inspiration, Rob Gabriele, happily relocated to escape just this kind of weather and mess. He laughingly picked us up and drove us through the deserted streets to his home for company — human and canine — and a warm, lovingly prepared vegetarian feast.

As a cook, I love to see how other people approach food and cooking, and Rob’s technique is a perfect extension of his personality: unpretentious, confident, economical, respectful and joyous. This simple side dish spiced with the barest bright splash of orange and mint has stayed with me since. It seems the perfect way to pay an early welcome to the spring-to-come, composed of roots and bulbs to remind us of the new life percolating under the slowly warming ground.

About those carrots: although it’s not yet the season, the smaller the better. (This is definitely a recipe to remember as the young varietal carrots begin to appear, however distant that may be.) I would typically peel them, but my favored vegetable authorities (Jane Grigson, Deborah Madison, Alice Waters) all suggest that the flavor is concentrated nearest the skin, so a good scrub is preferred to a scrape. Leaving ¾ of an inch or so of the green stems intact is also suggested, which makes for a holistic presentation that evokes the ingredient and its place in the cycle of growth. The idea is to cook them fast and thoroughly but maintain a little crunch.

Remind yourself that onions and shallots are of the same botanical family as all blooming bulbs: the snowdrops and crocuses that will shortly appear, the daffodils and tulips soon to follow. These things are both symbolic and real, and although the spring that just officially arrived seems teasingly tentative, this is the nature of life, and it is up to us to be patient and celebrate both the comings and goings of all the seasons.

Adapted from a recipe by Rob Gabriele; serves 4 as a side dish. (Note: Rob revealed that he usually does this with a combination of carrots and parsnips, which sounds attractive and tasty, but I originally experienced it as a carrots-only dish and still dream about it as such, so….)

Salt and pepper to taste

1. Heat a large heavy frying pan on high for 3-4 minutes. When the pan is hot, add 2 tablespoons of the butter or oil. Once the butter or oil is hot, add the carrots in a single layer. (If using the sugar, sprinkle it over all. This is to help caramelization.) Continually shake the pan while cooking for approximately 4 minutes longer.

2. Scatter the shallots evenly over the carrots and continue to shake pan and cook for another 3-4 minutes until the carrots and shallots are blistered and charred in spots (but not excessively so).

2. Add orange juice and continue shaking and cooking as before until juice has thickened and coated the vegetables (about one minute). Add last tablespoon of butter or oil, swirl to coat and remove from heat.

3. Add orange zest and stir to distribute. Sprinkle with mint and serve warm.