It’s not just about selling, but interacting with the community

There’s a new top dog in town — and his name is Buster. Buster Levi, in fact, and the Boston Terrier has loaned his moniker to the newest art gallery in town, Buster Levi Gallery, located at 121 Main St., in Cold Spring.

The gallery will celebrate its opening from 6 to 8 p.m. on First Friday, April 4, in an inaugural show, running through April 27, which will feature the work of all of its 14 member artists. Buster belongs to Martee Levi (or perhaps vice versa …) one of those 14, who serves as the gallery’s director. 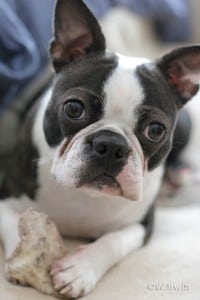 Buster Levi, who has kindly allowed the gallery to use his name.  (Photo by Martee Levi)

Levi, who has decades of experience not only as a painter, but as a gallery administrator, curator and installer (both in galleries and in private homes) is excited to open Cold Spring’s fourth gallery, the others being Marina Gallery, (where many of this group formerly exhibited), Gallery 66 NY and the Terence Donovan Gallery, all sprinkled along Main Street.

“I’m not new to this,” she explains, describing a history here dating back to when she ran the Benny Smith Gallery in Nelsonville about 30 years ago, soon after she arrived here from the city, first as a weekender, with her late husband Lou, a Columbia University Professor of Literature (jazz pianist on the side.)

With years of experience hanging art works at the Anita Shapolsky Gallery in New York City and nearly as many curating shows at the Garrison Art Center, as well as a two-year stint in Beacon at Finders Keepers Gallery, Levi knows of what she speaks, and she “feels good about the summer coming up” in terms of an increased gallery presence on Main Street, and a push to build a First Fridays event.

She also sees the increased presence of cruise ships, with their passengers disembarking for a day in Cold Spring as a great opportunity for the village. Levi is hoping that area restaurants align themselves by offering specials on that evening and that stores open late to accommodate the crowds gathering and gallery-hopping.

Levi sees art, and art galleries as “not just about selling, but interacting with the community. It’s nice to bring abstract art to this part of the world, but I’m more about education than anything else.  I’ve had this duality going from the start.” After college Levi came to New York City, teaching abstract painting in Harlem for six years, something she calls “very exciting.” Levi likes to quote pioneering gallery owner Betty Parsons, as saying a gallery is the “place where art goes on and is not just shown and sold.”

Levi and the other artists envision a space where visitors can interact with the artists, allowing the artists to have a place to share the ideas that feed their creative energy. Exhibitions will change monthly and will feature work by one or two gallery members, as well as group shows and work by selected guest artists. 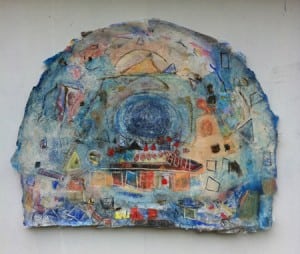 “Trastevere’ work by Bincent Baldassano, to be displayed at the Buster Levi Gallery

Buster Levi Gallery is a cooperative, with each artist contributing to the whole, from rent to exhibition time. The majority of the group has been together for four years already, based at the Marina Gallery.  When Marina’s owner Marina Yashina decided she’d like to return to featuring her own work and continuing her restoration business, the group of artists looked for a new home, considering Beacon as well as Cold Spring, but definitely deciding Cold Spring, with its constant foot traffic, suited their needs best, finally finding the right space in the large room which comprises their new location.

Most recently, he was a Visiting Artist at the American Academy in Rome. His most recent work is heavily inspired by the ancient sites, churches and temples of Italy. His works are colorful, often spiritual, containing a vast array of intriguing images.”

Also joining is Eric Erickson, who, the notes say, has “shown extensively for 35 years throughout the country and in New York City.  Erickson has received grant awards from the Pollock-Krasner Foundation, the Edward F. Albee Foundation and a number of other prestigious sources. His paintings are poetic and lyrical; many are whimsical, featuring quirky images which seem to float in space at times and produce an enigmatic effect.”

Painting by Bill Koolstra, part of the first exhibition at Buster Levi Gallery.

Rounding out the new artists is Bill Kooistra, whose recent paintings are described by the gallery as having “multiple panels, each piece inspired by random cropped images from the common local landscape. The final assembly is intended to reveal arbitrary associations or juxtapositions that would not ordinarily be considered.  The overall final effect is abstract.”

Initially the gallery will be open Fridays through Sundays, noon to 6 p.m. and other times by chance or prior appointment. Summer will likely bring longer hours. Phone 845-809-5145 or visit the gallery’s Facebook page for more information and images of the work.