Philipstown’s Town Board last week began considering installation of a cellphone tower at the town’s landfill, a project that could also bring a new generator to the site for emergency services radio operations. 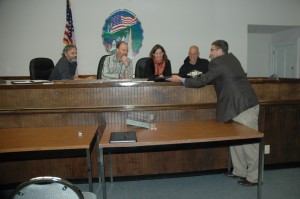 At its workshop Wednesday night (March 26), the board also continued efforts to get renovation of the 1867 Town Hall underway, following a tour earlier that day by architects interested in submitting proposals for the work.

To discuss the cell tower option, the board met with Vincent Xavier, site development manager for Homeland Towers, a Danbury, Conn.-based firm that works with service carriers, such as AT&T. According to Xavier, AT&T has identified a cellphone “dead zone” or “hole” at Nelsonville Corners, the area near Route 9 and Lane Gate Road, not far from the town government-owned landfill. No longer used for trash deposits, the landfill now serves as the Philipstown recycling center.

“The need is definitely there” for a cell tower in that spot, Xavier informed the board. “Otherwise they [AT&T] wouldn’t be spending the money” to get one. If the project moves forward, a detailed study of the need for the tower would be conducted, he said.

Xavier said that three private landowners have sought to locate the tower on their properties. However, “I wanted to offer the opportunity to the town first. You would have free use of the tower” for municipal purposes, he said. Xavier also promised to ensure that any lease with the town includes a provision for giving Philipstown a free generator. The board recently decided to see about adding a generator to the landfill for emergency service radio communication.

The Homeland Towers representative showed the board images of towers and said he believes the best model for the landfill would be a “mono-pole,” instead of a “mono-pine” version resembling a large conifer. Screened by vegetation, the tower would stand “at least 150 feet” tall in a plot 60 feet on a side and handle at least five or more cellphone carriers, plus the town equipment, he said.

“I certainly think it would be worth looking into,” Councilor John Van Tassel commented.

“It would mean monthly income for the town, which we are desperate for,” plus a free generator, Supervisor Richard Shea observed, although the amount of revenue, from use of the site, was not specified. He also noted that any visual impact and related effects would have to be evaluated.

Philipstown Zoning Board of Appeals Chairman Robert Dee, a member of the audience, observed that under the 2011 zoning law, which covers cell tower matters in detail, the tower “would need a special-use permit.”

The board and Xavier scheduled an exploratory visit to the landfill April 1.

Shea reported on his meeting with architects about the long-awaited Town Hall upgrades, including an elevator to provide access for the physically handicapped to the second-floor public meeting hall and courtroom. As part of the overall project, the Town Board also plans to rehabilitate Dahlia House, a vacant former home next door to Town Hall.

“When you start walking around this building and taking a critical look, it really gets depressing,” he said, outlining intended Town Hall repairs, both interior and exterior. “It needs to happen,” he said. “If you have a home, you just don’t let it fall into the ground. This is the town’s home.”

When the board turned to other business, Van Tassel mentioned one and sometimes two large fuel tanker trucks, 18-wheelers, parked “all the time” by Philipstown Square (formerly Perk’s Plaza), the shopping strip on Route 9 in the town’s northern end. He said he had brought the situation to the attention of the town code enforcement officer for likely action. Continually parking fuel tankers there “just doesn’t seem like a safe procedure to me,” he said.