The public hearing for the zoning amendment that must be adopted before redevelopment of the former Butterfield hospital site can proceed has been delayed for a second time — this time until April 29 due to a number of scheduling issues that surfaced at the Tuesday (April 1) meeting of the Cold Spring Village Board.

Discussion did continue however regarding comments submitted by the Planning Board on the proposed B4A zoning for Butterfield. Ann Cutignola, a planner with Tim Miller Associates, hired by developer Paul Guillaro, reviewed the tax implications of the proposed project in detail. The developer has estimated that gross annual tax revenue to the village would be almost $116,000.

While trustees would no doubt relish adding that level of funding to the annual village budget, Trustees Matt Francisco and Stephanie Hawkins have both expressed concern that if revenue projections prove to be overstated, the developer could file a grievance, requesting a reduction in taxes. When asked at Tuesday’s meeting if he would formally agree not to file such a grievance, Guillaro responded, “I can do that.”

In an email to The Paper, Falloon seemed pleased with the outcome of Tuesday’s meeting. “The tax implications are much clearer to me now … I do believe it (Butterfield) would bring some tax relief to the village,” he said. “The applicant (Guillaro) expressed his willingness to sign a separate agreement to a freeze on filing a tax case against the village. The … tax implications were examined by the Planning Board, the planning and engineering firm hired to assist the planning board, the tax assessor and by the Village Board last evening.”

Hawkins was also pleased with the discussion. In an email to The Paper she said that by agreeing to enter into a “no tax grievance” agreement, Guillaro had answered one of the village assessor’s cautions. “He (Guillaro) was responsive to concerns that his project’s tax revenue projections might be overstated. It means a lot that he’s willing to meet us on the question of grieving assessments in the future. I believe we all want the property to have a fair assessment that provides strong and stable tax income.”

The Paper asked Francisco to comment on tax benefits of the Butterfield project. “The Village Board needs to fully understand the valuation method of condominiums to understand how the tax receipts could change — especially in our small village (where) condominiums (are) a significant percentage of the taxable parcels.”

He also commented on Putnam County’s preference for owning its own space, should it decide to locate offices at Butterfield. “It would be unwise … to proceed without understanding the impact on taxes if part or all of the municipal building were to be owned by a tax exempt municipality in the future.”

Falloon said that Chuck Voss, a consultant working with the village on Butterfield, is preparing a memo that will help guide trustees as they address numerous issues raised in the Planning Board’s comments on the zoning amendment at meetings scheduled for April 8 and 10.

Trustees continue to chip away at obstacles standing in the way of a local resident’s quest to convert The Grove into a family home. Steven Marino of Nelsonville submitted the only proposal to acquire and restore the building after the village twice issued a Request for Proposals.

Issues still to be resolved include an old oil tank buried on the site, the status of a number of easements, and the implications of a request by Marino for tax relief. Falloon reported that the village can use its own workers to remove the old tank with Downey Oil disposing of it at a cost of $1,500. Soil testing could cost up to $625. Additional costs would be substantial if tests reveal significant soil contamination. 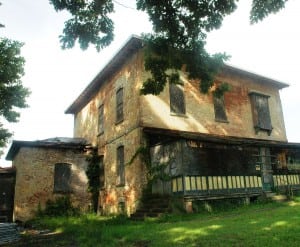 Falloon said he feels that costs associated with the tank’s removal are the responsibility of the village. “It should have been removed when the village acquired the property,” he said. Village Attorney Michael Liguori said that Milano has requested that a pedestrian easement across the property be removed and that two other easements for utilities and parking don’t pose a problem.

The most complicated issue is Milano’s request for a tax abatement plan, requiring enactment of a new local law affecting Cold Spring’s entire Historic District. The scenario would see Marino pay taxes only on the assessed value of the property in its current rundown state for the first five years — but not on the value of renovations. His taxes would then increase every five years until they reflect the full value of improvements.

It was initially believed that the village would pass the new law, however Liguori reported that the Town of Philipstown has that responsibility, supported by the Village of Cold Spring and Haldane Central School District. Haldane’s Interim Superintendent of Schools, John Chambers, supports the law. Falloon will now ask Town officials if they are willing to enact the law. Milano had suggested an April 15 deadline for resolving all outstanding issues but Liguori indicated that the date is negotiable.

The Grove, located atop the embankment behind The Nest childcare center on Chestnut Street, was designed by noted architect Richard Upjohn and constructed in the 1850s. It is listed on the New York State and National Register of Historic Places and was acquired by the Village of Cold Spring in 2003. It has sat empty for years and is in a poor state of repair.

The timeline for adopting the 2014-15 village budget is tight to say the least. Trustees received the tentative budget at Tuesday’s meeting and will review it in detail on April 8. The public hearing on the new budget will be held one week later on April 15 — a deadline imposed by New York State. Total spending from the General Fund next year is estimated at $2,700,140 with $1,507,168 to be raised by taxes — an increase of 2.89 percent over last year.

Falloon said that after the close of the public hearing, funds can be transferred within the budget but total spending cannot increase. The draft budget includes a salary increase for village employees while the stipend paid to trustees and the mayor remains the same, Falloon said. The mayor’s rather concise summary of the draft budget was that it includes “nothing crazy.”

The New York State Energy Research and Development Authority (NYSERDA) has removed all conditions from a $75,000 grant to update Cold Spring’s zoning code. The project will bring village zoning into compliance with the 2012 Comprehensive Plan. Village Attorney Liguori said that NYSERDA recognized that the conditions it had initially required were not appropriate. The grant application had included stringent environmental components such as preferred parking for hybrid vehicles.

Trustees insisted throughout the application process that they would not accept the funding with such strings attached. “They’ve been very flexible,” Trustee Hawkins said of NYSERDA. Cold Spring’s current zoning was originally adopted in the 1960s and copied directly from a suburban New York community rather than drafted to reflect village conditions, a move which has caused problems for decades.

A notice will now be issued by the village, seeking residents interested in serving on a committee to assist with the zoning update.

During the public comment period, Alison Anthoine, a resident in the area of the Cold Spring Boat Club, inquired about rumors that the New York State Department of Environmental protection (DEC) had asked that the club building be vacated by August 29, rather than by Sept. 30, as originally agreed. Falloon said that DEC had made the request but that the village had responded that it was not a reasonable requirement since boating would still be in season through August. The building is to be razed as part of the DEC cleanup of toxic coal tar deposits on site, a byproduct of a manufactured gas plant that went out of business in the early 1900s.

Scheduling a number of significant meetings posed a logistical challenge for trustees as they juggled dates, issues, deadlines, travel, conflicting meetings and venues. The short-term schedule was resolved as follows:

Tuesday’s meeting was the last for outgoing Trustees Francisco and Charles Hustis. Newly elected Michael Bowman and Cathryn Fadde begin their terms at the meeting on April 8.