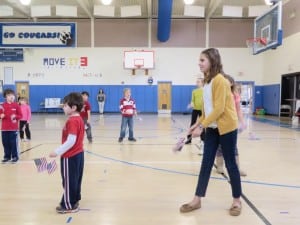 In “Move It! 3,” Bresnan and Beckley selected a variety of popular songs from different decades, created movement and dance moves as part of their respective curricula and tied in the themes of “Patience,” “Honesty,” “Compassion,” “Courage,” “Pride,” “Respect,” and “Responsibility.”

In what has become a tradition on the big night, the concert opened up with the kindergarten through third grade student performers entering the gymnasium in grand style to the Olympic Fanfare and Theme, each grade dressed in a shade of yellow, green, blue or red.

Next, the first, second and third grade students participated in a sophisticated giant parachute routine to Survivor’s Eye of the Tiger that required significant cooperation to make the heavy equipment rise and fall in unison. The kindergarten and first grade classes showed respect for their country and flag with a patriotic flag routine to The Stars and Stripes Forever. This was followed by the second graders performance of an Irish Dance number to St. Patrick was a Gentleman.

A fast-paced “P.E. Montage” allowed each grade its moment to shine while showing off a different athletic move. The kindergarten marched across the gym to I Would Walk 500 Miles, the first grade soared to Fly Like an Eagle, the second grade hopped and jumped rope to Jump Around and the third grade, before high-fiving each other to Why Can’t We Be Friends?, staged an intense dodge ball game. The final song included all of the kindergarten through third grade students in a cheerful performance of Wavin’ Flag, a song from the 2010 FIFA World Cup that carries a message of unity, pride and freedom.

Bresnan talked about the importance of cooperation in making “Move It! 3” a success. “During rehearsals we learned how to work together as a class to make a well-coordinated performance,” Bresnan said. “Students also learned to be patient with themselves and others as they practiced new skills. The satisfaction of performing a smooth and cooperative routine was something our students grew to appreciate.”

Throughout the event, Garrison middle school students assisted with props, ushered the elementary school performers on and off the gymnasium floor, guided the younger students through the choreography and clapped and cheered them on. This type of support is an excellent example of the culture at the K-8 Garrison School where older students have ample opportunities throughout the school year to mentor and build relationships with younger students.

“At the Garrison School, programs such as Differences Day, Fifth Grade Kindergarten Buddies, Peer Tutoring and VIPs teach students to respect others no matter what their age,” explained Garrison School Principal Stephanie Impellittiere. “Receiving encouragement from middle school students helps build confidence and self-esteem in our youngest children and fosters leadership skills and responsibility in our older students.”

Sixth grader Anna Rowe volunteered time to work with the kindergarten classes as they learned their “Move It! 3” choreography and helped them during the performance.

“We helped them keep quiet and sit still while the other groups were performing,” Anna said.  “They were so jumpy and energetic and it was really fun to be with them.”

Sixth grader Isaac Walker volunteered time with his sister Nellie’s first grade class and guided them through their dance moves.

“I helped the first graders get ready for their cues and led them around the gym,” Isaac explained. “It was a lot of fun helping them. This was the best ‘Move It’ yet!”

The Garrison School thanks Bresnan, Beckley and all of their middle-school helpers for devoting considerable time and energy into creating a lively and entertaining event for all the student performers and their families.