BUT… I also want what I want and therein lies my own beating heart of darkness: my personal microcosmic reenactment of the timeless and universal war between good and evil.

Now, I’m not a religious person but my spirit depends on a peculiar idea of reincarnation — every night I go to bed and fall asleep, effectively putting an end to the “real” world, only to (hopefully) wake up the next day and recreate it as best I can from cellular memory and the resources at hand.

I don’t mean to get heavy on you but I have to frame this week’s recipe with the proper weight and respect it deserves: I am talking about breakfast.

I LOVE to eat and I’ve mentioned before the reverence and curiosity with which I hold the act and process. I am an unrepentant sensualist and omnivore. I frequently consult cookbooks with titles such as “Fat,” “Bones” and “Unmentionable Cuisine” and consider the vegetarian cooking of Yotam Ottolenghi rapturously pornographic in an ecstatically spiritual way.

But I am also a living, breathing organism with (perceived) schedules and responsibilities and (absolute) physical weaknesses and limitations. I can’t cook — or eat — as I’d like to all the time without jeopardizing or seriously curtailing this particular ongoing cycle of birth/rebirth. With time this realization has lead me to a handful of gastronomic, if not spiritual, truths: First, everything in moderation. All things are allowable if as a matter of course I choose to follow the path of equanimous moderation. (In the plus column, this moderation necessarily includes the occasional properly reverential excess.)

I follow the nutritional tenets of people like Michael Pollan and recent converts like Mark Bittman (see his recent VB6 ideas); even the occasional crackpot like Timothy Ferriss (the “4-Hour This-and-That”). I believe that — generally — you should “Eat breakfast like a king, lunch like a prince and dinner like a pauper” (Adele Davis, I believe); shop around “the outside of the supermarket” and “eat more vegetables — particularly leaves.”

The edict to stay away from the more processed forms of foodstuffs is foremost. This, of course, negates the majority of stuff Americans generally consume for breakfast: baked goods (scones, muffins, toast), processed cereals, dairy and sweet stuff. (Just think of the stuff General Mills and Kellogg’s markets to your children …) Don’t even think about Egg MacMuffins!

This led me a couple of years ago to experiment with salads for breakfast  (which I look forward to again as summer approaches) but I didn’t achieve the proper balance of protein and energy-producing carbohydrates to achieve my kingly aspirations until I found the most basic version of this Breakfast of Champions on a “slow-carb diet” suggested by Mr. Ferriss.

His impetus was rapid weight loss and an extremely geeky OCD-ish time-management, and while I appreciate his (pseudo- or otherwise) science, the preference for time-saving (canned lentils, frozen spinach) seems a bit Spartan and mechanically “efficient” to the gastronomical me. 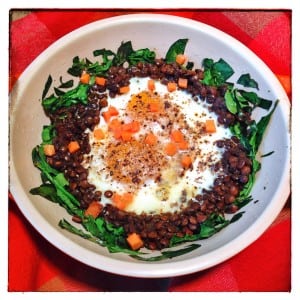 Take it from the food-lover: It’s easy enough to prepare a pot of tasty lentils that will keep for a bit in the refrigerator, and the quantitative AND qualitative nutritional and taste difference between canned and dried lentils (particularly the little green French or “beluga” or lentils available from Adams or in bulk at Nature’s Pantry) is well worth the extra time and effort. I like to garnish the cooked beans with some minced shallot and finely diced raw carrot for crunch.

The addition of fresh spinach (“Eat more leaves”) and low-fat protein from one or two optional eggs (I’m partial to Glynwood Farm’s cage-free beauties) is regal indeed. I happily enjoy this meal four to five days a week and have come to crave it occasionally even for dinner. I rarely get bored with the combination and when I do it’s easy enough to shake up: try a Spanish-flavored version with black beans or different greens. (I made a version last week with some leftover smoked-paprika-spiced sautéed kale based on a refined version I had at restaurant Buvette on Grove Street in New York, served with a poached egg.)

Assembly in the morning consists of about 5 minutes prep time while the oven pre-heats and 20-25 minutes cooking — which allows you ample shower and grooming time to get ready for your world-beating re-creation of a brand new day.

Beans for a week of breakfasts, for one.

1. Heat oil in a saucepan large enough to accommodate lentils. Sauté onion until soft and translucent; add garlic and sauté another 1-2 minutes. Add carrots and celery cooking for another 2-3 minutes; add thyme and savory and incorporate for 1 minute. Add lentils and enough water to barely cover. Bring to boil and lower heat to a bare simmer. Stir in tamari and molasses if using. Cover and cook until just barely soft (@ 45 min. – 1 hour). Add water as necessary during cooking to keep lentils barely covered.

2. When lentils are cooked, remove from heat and allow to cool, covered. When cool, stir in carrot and shallot garni, correct seasoning and store in a covered container in the refrigerator for up to a week.

2. Warm 1 cup of the lentils in microwave. (@ 5 min on power level 5 — you want to take the chill off since they’ve been in the refrigerator.)