Creative types were flocking to the neighborhood for large spaces, cheap rent and like-minded souls. A young artist scrapes enough money together to open a café in an old lawyer’s office on a burned out, boarded up city block. The funky DIY decor, heavily influenced by a staff of bohemian cohorts, immediately attracts a clientele of fellow artists, musicians and writers looking for a hangout.

The year was 1992. The location? About 60 miles south of Beacon, in a place known as Williamsburg, Brooklyn.

Kit Shapiro Demirdelen, left, with friend, P. David Ebersol outside the L Cafe in 1993 (Photo courtesy of the artist)

“I look back and I think I was nuts,” said Kit Demirdelen (née Shapiro), who was 27 years old when she opened the L Café, named after the subway stop one block away. “We started to build without permits. I didn’t have a contractor. My friend’s husband was an architect. It was like a clubhouse.”

Catherine Welshman, Kit Keith, Alexandra Lakin and Olivia Pintos-Lopez worked at the café in those early days. Like Demirdelen, they were young artists who lived in the area. “We were pioneering at a time when there was actual danger where we lived,” she continued. “The old people in the neighborhood had never seen anything like it.”

Relocation, distance and the passage of time

All five women now have families of their own. They are all still artists. In spite of relocation, distance and the passage of time, the bond they formed 20 years ago is still strong. Next week, in Beacon, their work will be shown together for the first time.

Welshman, who moved to Beacon in 2001 and opened her gallery, Mad Dooley, two years ago, has curated an exhibition of new works simply titled The L Café Show. The opening reception is from 6 to 9 p.m. Saturday, April 12.

As friends, these women are celebrating a reunion. That they share a similar approach to their work makes Welshman’s job as curator all the more poignant and rewarding.

“When I wanted to do a new group show, I thought ‘who are some of my favorite artists?’ and these women kept coming to mind,” she said. “We all grew up at the same time. We’re all a little different. Our art is a little different but there are commonalities. It’s wonderful that I can be with them again, but in a totally different way.”

Welshman describes her own character-driven paintings as “small treasures,” layered with cutouts and scraps, including human hair. Lakin, who lives in Los Angeles, has recently evolved her work from video and animation to printmaking and sculptural pieces. A self-proclaimed “indie character,” Keith, who is based in St. Louis, includes trapeze artist, punk rocker and golfer on her curriculum vitae. The use of lost and found objects, such as old worn-out dolls and discarded mattresses, gives her work an outsider or “hobo” quality that reflects the diversity of her personal history.

The art of the L

Demirdelen, who lives in Hastings, N.Y., says she is as much influenced by mid-century modern furniture and her mother’s 1970s Marimekko dresses as she is by Diebenkorn and Matisse. “I studied painting and printmaking in college but when I brought my son home to our two-bedroom apartment, and I didn’t have a studio for the first time, I wanted to try materials that were more portable and didn’t smell.” She now works predominantly with hand-dyed wool felt. 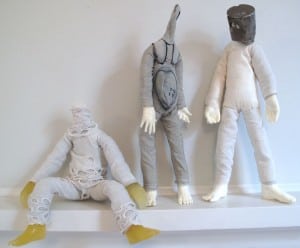 “Untitled Avatars” by Olivia Pintos-Lopez (Image courtesy of the artist)

Pintos-Lopez (née Griffith) is the farthest from New York. She lives in Melbourne, Australia, where she is pursuing a Ph.D. in architecture and design. For decades, she has been making three-dimensional figures that are specific to the location where she finds her materials.

“It was a wonderful, intense experience, although definitely of the time and place,” said Pintos-Lopez. “Everyone who worked at the L became friends as we were all committed to making music or art or dance or theater. Working with fabric and finding the significance in discarded materials were ideas Cath introduced to me. We connected over this type of small-scale figurative work, however, for me, it was the first time I had really thought of it as art. I think it was the beginning of the kind of work I make now.”

Formally, The L Café Show explores the participating artists’ love of color, shapes, found objects, tangible materials, and real or imagined stories. A little of that old DIY attitude prevails to this day.

In an article in The New York Times from 2005 titled “The Day When Back in the Day Ended,” Freddy Jakubowski reminisced about the L, which was across Bedford Avenue from the Greenpoint Tavern, where he worked as a bartender: 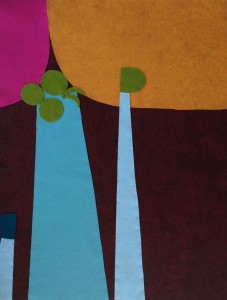 “Peter’s Decision” by Kit Demirdelen (Image courtesy of the artist)

“Some girl opened it. She was a good girl. I’m not much of an architect or a decorator, but she did it something like Greenwich Village. The artists mostly talked among themselves. I talked to a couple of them if I could understand them.”

Demirdelen sold the café in 1998 to one of her waiters, who kept it open for a few more years. It is now a pizza parlor. “We were kids. The idea of living with our art all of the time was very important,” she said. “In a way, the L was an expression of this. It was the root ball of our friendship. Now here we are, back together again, after many years of continuing to make art.”