Blame it on winter, one more fall-out from snowfall: The proprietor of the Gulf gas service station next to the Foodtown plaza in Cold Spring said last week that the case of the watery diesel fuel in his tank in January began with leaking snow that tainted his diesel supply.

Seen as the cause of the breakdown of a customer’s truck, the watery diesel problem left Philipstown motorists worried. It likewise drew the attention of Putnam County legislators, who commented on it during an April 1 meeting, following intervention by the county Consumer Affairs Department. 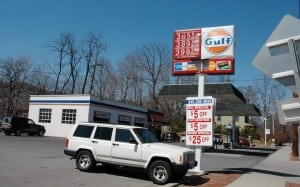 Syed Hussain, who operates the Gulf station involved, assured the community April 4 that the watery fuel problem was readily corrected after he learned of the damage to local resident Tony Bardes’ truck in January. Bardes used the station to fill up his truck and then reported that it suffered a serious breakdown and notified the Consumer Affairs staff.

“We did not do anything purposely,” Hussain said in a telephone interview with Philipstown.info. “We’re not doing any shady business. It was an accident. I do legitimate business.”

“Let me tell you exactly what happened,” he said. “We had a very heavy snowstorm that came that time. The water ran into the diesel; a lot of snow was sitting on top of the diesel tank. And the snow went inside to the fuel.” He attributed the seepage in particular to a broken seal on the tank cap.

Hussain mentioned the storm’s difficult aftermath. The snow was so deep at the station that “we could not even go there” to clear it, Hussain said. “We had to call a special type of bulldozer. It came and shoveled the snow.”

“Probably the gentleman who got the diesel that time got the bad diesel into his car, his truck, and his truck broke down,” Hussain said, adding that the station covered Bardes’ repair costs “100 percent. [Our] insurance company came up and reimbursed him,” he said.

Hussain said that when they learned of the water in the tank, “we stopped pumping diesel. We shut down the pump immediately. We didn’t do business.” Next, he recalled, “We pumped out the tank. We cleaned the tank completely. Gulf sent the ‘vacs’ truck. We cleaned it out. I lost $7,000 of the product myself. I don’t want to give a dirty product with something like that to anybody. We pumped it out — everything from the tank” and the bad fuel was hauled off, he said. “And we put new diesel inside, after pumping out everything.”

According to Hussain’s recollections, the county Consumer Affairs office came to the station twice, and the New York State Department of Environmental Conservation stopped by as well.

John Lee, Consumer Affairs’ inspector of weights and measures, said April 7 that he spoke with the DEC about the gas station on Jan. 27, but after that “we never got any information from the DEC.”

A DEC spokeswoman, Wendy Rosenbach, told Philipstown.info on April 8 — about a day after she began checking with DEC employees and files — that she and her colleagues could find no evidence of a DEC role in the case.

However, the county Consumer Affairs Department visited the station twice.

“The first time” Consumer Affairs visited, “they checked it and they told us what to do and we did that,” Hussain said. “We followed the instructions.”

Later, after the station took action, he said that — as he remembered events — the interest of one or another government entity continued. “They looked at it. Everybody gave us an OK to open the pump. They gave us an OK and we started doing business. Everything is straightened out.”

Jean Noel, director of the Consumer Affairs Department, stated April 7 that on her agency’s first visit to the station, Jan. 14, she and Lee “spoke with station personnel and collected appropriate paperwork. At that time, the station admitted that there was water in their diesel UST [underground storage tank] and that the tank was shut down while awaiting repairs. Several days later, another member of my department returned to collect additional paperwork. At no time did any member of my department sign off on the resumed use of the diesel pumps. As long as the repairs did not include any recalibration of the pumps, the station was under no obligation to inform us that the pumps were back in use,” she said. “We have no jurisdiction over whether or not a UST is ready for use following cleaning.”

Hussain noted that he owns a string of 22 gas stations. If problems exist, “how come my businesses are running properly, the stations are so clean [and] everybody is coming [and] leaving with a happy, smiling face?” he asked. “I’m running a very successful business. I’m not doing any kind of shady business.”

Moreover, he added, his Gulf station, and another on Route 9 operated by his brother, provide gas at very modest prices. “We are very [much] cheaper than Westchester and other Putnam County stations,” he said. “I always sell very cheap.”

And station plans to add a Dunkin’ Donuts outlet? “I can’t comment on that at this point,” Hussain said.