I wonder what the cool kids are eating now?

It’s been nearly two years now since a dinner conversation at the home of my friends Jane and Pete jokingly revolved around the question, “Who does kale’s P.R.?”

The unquestionably nutritious and historically unglamorous green was in its mid-to-late flush of trendiness with seriously overpriced kale chips appearing in the “hipper” (i.e., overpriced) markets and recipes for kale salads and kale pesto abounding in niche-to-mainstream food media worldwide. 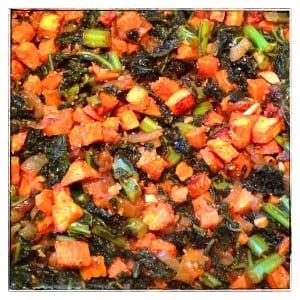 This crunchy “It Girl” of the brassica family had come a long way from writer Jane Grigson’s estimation of it as sheep’s fodder to its loving adoption by bleeding-edge gastronauts worldwide. Kale seemed as omnipresent as balsamic vinegar or truffle oil did in the ’80s and ’90s or as bacon has been since the Oughties. The appearance of red and black varieties with exotic names (lacinato, dinosaur, cavalo nero) and pedigrees, and its three-season appeal to farmers and general availability ensured both its fashionable foodie embrace and democratic spread.

Cue the pop-cultural shark jumping: last year The New York Times Magazine featured a serio-comic cover story attempting to fan the flames of a broccoli vs. kale marketing throw-down—“Broccoli: 43 percent less pretentious than kale,” or, “What came first: kale or the bandwagon?” Just last week I saw a recent recipe offering dismissed with the comment, “Blistered carrots are this year’s kale.” (Does that make orange the new green?)

Such chatter is truly meaningless, especially after acquainting myself recently with a surprising pairing of kale with smoked paprika. Suggested by food writer Deborah Madison as a vegetarian alternative to a natural carnivorous pairing with bacon, a simple sauté of blanched kale with onions and garlic becomes something quite different seasoned with the oaky sweetness of the spice.

Also known as pimentón and not nearly as alien or exotic as it sounds, my favorite blend is Penzey’s Spanish-style smoked paprika, available locally at the Penzey’s store in the Palisades Mall (or online at penzeys.com). The supermarket-friendly McCormick’s brand has a widely marketed version in their “gourmet” line.

As good as the kale is by itself, a late-winter purge of my pantry uncovered a stash of Flour City’s artisanal sweet potato papardelle (purchased last fall at the Beacon Farmers Market but also available online from flourcitypasta.com), which made a delicious bed for the greens. The maple-like sweetness of the pasta deliciously offset and complimented the greens, ultimately suggesting the recipe offered this week.

Diced and roasted separately at high heat and incorporated at the end of cooking, the lightly caramelized sweet potatoes marry the natural bitterness of the kale to the onions and spices for an exceptional and very flexible side dish which itself suggests further refinements and variations. This hash could easily become a hearty breakfast or brunch dish topped with a poached or fried egg, a pasta toss with the addition of a bit more liquid and a grating of pecorino, or a luscious baked casserole dotted with goat cheese.

1. Sweet potatoes: Preheat oven to 450˚ (425˚ convection). Toss sweet potato cubes with 2-3 tablespoons olive oil and season with salt and pepper. Spread in one layer on a baking sheet. (Line the sheet with parchment paper if you’ve got it: this makes for crispier sweet potatoes.) Bake in top third of the oven for 20 minutes. Flip cubes with a spatula and continue roasting for another 10-20 minutes checking occasionally to make sure they don’t burn. You want a bit of a caramelized crust but not too much. When done, remove from oven and set aside.

2. Kale: While the sweet potatoes roast, put a large pot of water on to boil and salt liberally. Wash and drain kale and remove the heaviest of stalks. Chop into a rough chiffonade (large ribbons). When water is boiling, submerge kale and cook for 7-8 minutes. Drain and refresh with cold water to stop cooking. When thoroughly drained squeeze out excess water and set aside.

3. The hash: Heat 2-3 tablespoons of oil in a large skillet, medium-high. When hot add onions and stir as they cook until they begin to color (about 5-6 min.). Add garlic and cook another 1-2 minutes. Add smoked paprika and cook another minute; add kale and stir to distribute onion mixture. Cook uncovered, stirring, 3-4 minutes. Add water or stock; lower heat to medium-low and cover, allowing vegetables to cook for another 4-5 minutes until kale is well wilted.

4. Remove cover and raise heat to medium-high to boil off any remaining liquid, stirring vegetables constantly. Add a splash of olive oil and when hot add sweet potato cubes stirring gently to combine and long enough to just heat them through. Remove from heat, adjust salt and pepper and serve hot.