Eleven internationally accomplished photojournalists join 11 military veterans to combine art and photography in Fovea’s powerful upcoming exhibition, WAR & MEMORY presented by The Homecoming Project, Saturday, April 12, with a public reception from 5 to 9 p.m. The exhibit is on view through July 6.

This exhibit documents the ongoing struggles faced by communities upon the return of American military who have served in the wars in Iraq and Afghanistan. Issues including post-traumatic stress disorder, traumatic brain injury and suicide among the veteran population are devastating American families and communities. The images of professional photojournalists are paired with the creative works of service members to promote awareness. 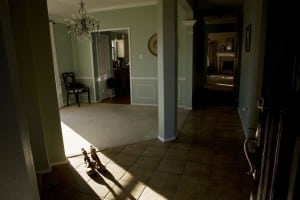 The entrance of Taryn Davis’ house with her late husband’s Iraq war boots always in the entrance. Davis is the 24-year-old founder of The American Widow Project, a support organization for the new generation of war widows. Photographed at her home in San Marcos, Texas.

The exhibition is drawn from photography collected by the Homecoming Project, a public awareness campaign founded by Erin Trieb, a photojournalist featured in the exhibition. Trieb spent four years documenting veterans and years collecting photography and art to illuminate issues faced by returning veterans and their communities.

A panel discussion is scheduled for 6 p.m. on June 28, to discuss life after war with Trieb and photographers, veterans, mental health professionals and military family members. Fovea is located at 143 Main St., Beacon.

Photo by Gina LeVay/Courtesy of The Homecoming Project & Fovea