Beacon’s Theo Ganz Studio (TGS) bills itself as “the little gallery with the big windows,” and though those windows have been covered over the past month, providing the best interior light for a digital art exhibit, they will revert to their natural state in time for the next exhibit, Joseph Ayers, Lost and Found, which opens with a reception from 6 to 9 p.m. on Second Saturday, April 12. Ayers’ work is representative of the artists TGS focuses on: emerging and mid-career professionals working in a variety of media.

Looking out from within the Theo Ganz Studio during the installation of the Joseph Ayers exhibition.  (Photo courtesy of Eleni Smolen)

Opened by artist Eleni Smolen two years ago, TGS presents monthly exhibits; each Second Saturday brings a new one. “The learning curve has been tremendous,” says Smolen, noting “with every show I’ve learned something — I’m constantly figuring out what’s good for me and for the artists.” Smolen, born in Deep River, Ontario, has always been interested in the arts. She began painting in the 1990s, living in Brooklyn, where she had a studio. At that time she worked as a clinical social worker after earning an MSW from New York University.

“I was always interested in seeing what my peers were doing,” she says, “and I hosted a number of exhibits in my studio. I had the inclination, even then, toward curating and presenting. It has always fascinated me to visit studios and see how artists worked whatever their medium.”

After 15 years in Brooklyn, Smolen and her husband, needing a change, moved upstate to just outside the village of Deposit. “It was very rural — we were literally in the woods surrounded by 1,100 acres of Boy Scout land,” Smolen described. “Our neighbor down the road had a beautiful pond where we would go swimming with the dog. I had always wanted to live in the country. That’s where I started to paint. I took one of the small upstairs bedrooms and would wrap long sheets of gessoed paper around the room and paint away. It was really so incredible to be able to just let go like that. But then, like everything, things changed and the logistics became too difficult.”

Deciding it was time to relocate closer to New York City, Smolen and her husband settled upon Beacon, where she had frequently driven, for close to four hours round-trip, to hear curator talks at Dia. “Beacon was on my radar; it still had the natural feel of the landscape and seemed like a good compromise. I had no idea at the time as to how active an art community it was.”

After becoming a member of Beacon Arts and renting a studio at Bulldog Studios for her own work, Smolen took a year, looking up and down Main Street, to settle on a space.

“It occurred to me this would be a nice place to have a gallery. Probably doable in many ways,” she says. When the large room, located near the West End of Main opened up, she jumped on it: “I like the big windows and usually like keeping them without blinds and having the gallery visible to the public. Although the down side of that is that people tend to look in and think they’ve seen the show. But it’s a clean spare presentation for someone’s work — I like keeping it pared down so that the work stands out and is not competing with a lot of other things.”

The name Theo Ganz is a composite of two people: the Greek film director Theo Angelopoulos, and the actor Bruno Ganz, who played the lead in his film Eternity and a Day, which Smolen had just seen around the time she was opening her Brooklyn studio. The name has remained the same since.

Engaging in art and beauty

There is no one aesthetic to the gallery, indeed, “each of the artists is so different to the rest,” notes Smolen, adding that her “interest is piqued when I see work that connects with me; the artists who are actively engaged with their practice are the ones whose work I’m drawn to — and that can be across every medium … I always want to make a studio visit. You have to see the work in person — the artist in their environment with the work in progress around them is very interesting to me. You get a sense right away how actively engaged they are. I am looking for artwork that you might not see at another gallery in town. More and more I’m attracted to work that has an edge to it — that startles or shakes me up emotionally. It isn’t about beauty in the traditional sense — now it is especially about beauty presented in a new way.” 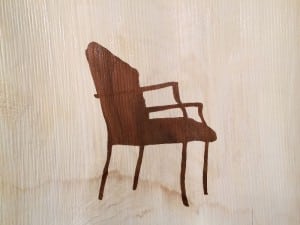 Recently, Smolen has seen a change in Beacon. “When I opened there was a real lull in terms of galleries and places to show,” she says. “Though when we first moved to Beacon, I was fascinated by the fact that everywhere you went there was art hanging on the walls: restaurants, coffee houses, banks, real estate offices … I guess it’s what makes Beacon Beacon. They say Be The Change You Want To See so I did. Now it’s on an upswing. The thing that is changing Beacon faster now than anything else is that it has become a music destination as well — it’s becoming truly a haven for musicians and performers — not just the visual artists — and I think this is a win-win for both the community that lives here full time and visitors. It feels different. When I have visitors come who haven’t been here in, say five years, they are amazed by the changes.”

As for Joseph Ayers, Smolen calls him “a beautiful painter. His background is combined media: paintings, drawings, sculpture and sound performance. This is his first solo show — which I’m proud of. I visited his [Beacon] studio, learned about all the things he did. He has an MFA from Hunter and spends a lot of time teaching in the Hudson Valley. In this show there will be some videos and some sculpture along with the paintings; it will be a very diverse show.”

Lost and Found, according to press notes, is a “collection of work that explores connections between perception and reality, life and death, the intimate and the sublime and the materiality of sensual experience. In each piece the subject is lost within the medium and in the process of finding it, a new perception of the material is found by the viewer … Landscape, nature and human cognition are recurring themes.”

Ayers’ work, like that of the other artists she has shown, is what inspires Smolen in her work. “What thrills me is they’re all so different; they bring their own strengths and vision. What keeps me so passionate about it is their passion. There’s so much talent in the area, it’s overwhelming.” In addition to her work at TGS, Smolen will be project manager and curator for the upcoming second edition of Beacon 3D, an annual outdoor public art project which begins with installations of sculpture in May at various locations along Main Street.

Theo Ganz Studio is located at 149 Main St., Beacon. Usual gallery hours are Friday through Sunday noon to 5 p.m. and by appointment. Visit theoganzstudio.com or phone 917-318-2239.