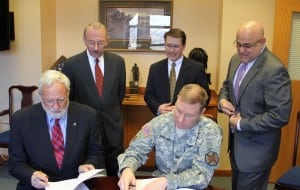 The memorandum replaces an arrangement that had expired in 2012 and had not been renewed during a period of transition.

“This is another firm step forward in our renewing a healthy relationship with West Point,” said Osborn, an Army veteran of the Vietnam War.

“I am glad to have the CIA working with us,” Rideout said. “We’re all anxious to improve access to beautiful Constitution Island, and to restore the Warner House, a place steeped in history and meaning.”

The memorandum references U.S. Army regulations and directives, and covers events, fundraising, access, gardening, gift shop operation, liabilities, and the all-important restoration of the “Warner House,” the 18th-century house on the island occupied by the American writers and composers Susan and Anna Warner. The house has been closed to the public since 2008 due to safety concerns regarding structural integrity.

The USAG-WP has invested in 100 percent design-build documentation. West Point Association of Graduates is raising funds necessary from private donors, will supervise the construction bid process, and will administer restoration work, all to exacting specifications of historic restoration standards. Plans call for a new education center on the island, much of which will be built with financial support from the CIA.