Before plowing through an agenda already laden with weighty topics Philipstown’s Town Board spent much of its formal monthly meeting last Thursday (April 3) in listening mode, presiding over presentations from St. Christopher’s Inn on a drug-abuse and State Sen. Terry Gipson on government finances.

Later during its formal monthly meeting, the board agreed to equipment-sharing with Cortlandt and other area towns, opted to join Putnam County in hazard mitigation planning, and launched a rezoning of the Countryside Motel from “office commercial” to “highway commercial” to better accommodate the motel’s present status and ongoing goals.

The board also learned that the New York State Department of Environmental Conservation (DEC) recently delayed long-pending culvert work on Indian Brook Road due to concerns from the state Office of Parks, Recreation and Historic Preservation.

Finally, the supervisor and councilors heard from residents concerned about possible installation of a cellphone tower at the town landfill.

David Gerber, director of counseling at St. Christopher’s Inn, the substance-abuse treatment center based at Graymoor, the monastery of the Franciscan Friars of the Atonement, and Marianne Taylor-Rhoads, the facility’s chief operating officer, told the board and public of the troubling incidence of drug abuse, in Philipstown as well as beyond. 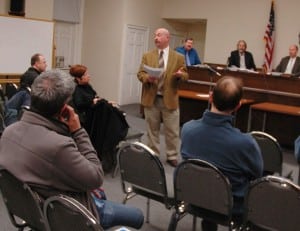 David Gerber of the St. Christopher’s Inn treatment center discusses drug addiction with the audience, as Town Board members listen.

“The fear you have and the frustration, we’re experiencing as well,” Gerber said. “It is the worst in our field … the worst we’ve ever seen it.”

He and Taylor-Rhoads zeroed in on opiate addiction, a problem they attributed in part to pharmaceutical companies’ push, starting in the late 1990s, for physicians to prescribe powerful pain-killers, coupled with the firms’ criticism of physicians for under-treating suffering patients when the doctors balk. Children and teens acquire the opiates from family medicine chests or after receiving prescriptions for pain from youthful sports injuries; then, when the prescriptions end, the youngsters turn to heroin and other illegal drugs, they said.

At St. Christopher’s, which mainly serves adults, “we’re doing this on a shoe-string,” with the friars providing the shelter for the inn’s residents free of charge, Taylor-Rhoads added.

They invited parents and individuals with concerns about drug abuse to contact them for advice. “We’re available to talk to you, talk to your schools,” Gerber said.

Asked about legalizing marijuana, Gerber sounded wary. “Marijuana is a problem all by itself,” he said, predicting that if it becomes generally available, society will suffer more traffic fatalities and workplace losses in productivity as well as more addiction. “Personally, I think it would be an absolute disaster,” he said.

State Sen. Terry Gipson provided details of the 2014-15 state budget completed by the governor and state legislature at the end of March. One form of state aid to Philipstown will remain the same as in 2013-14, at $33,820 — “we were able to fight and not have a decrease” — and another, for highway-related needs, will also hold steady, at some $135,200, Gipson said. Furthermore, the budget provides $40 million statewide to help local governments cope with costs of the extreme wintry weather, with $16,000 going to Philipstown, according to Gipson. 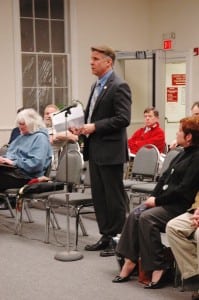 The senator, a Democrat, also outlined the state’s new resident-oriented incentive to encourage local governments to consolidate. As Gipson explained the initiative, “local property taxpayers will be entitled to a tax credit which will be the difference between one year’s tax and the next. The state will figure that out and send them a rebate check and the only requirement will be that you stay within the tax cap” the state imposes on property-tax hikes.

“As long as you’re tax-cap compliant and provide an effective plan of showing how you’re either going to share services or consolidate services or just work on consolidating your own services,” he said. “Your property taxpayers will be entitled to a credit. And that will happen two years in a row, starting in 2015. All in all, it is a $1.5 billion property tax relief aid, across the state, so that’s good news.”

Later, the board unanimously voted to authorize sharing of highway and similar equipment with the Town of Cortlandt and, through it, perhaps with other jurisdictions. Cortlandt spearheaded the effort, allowing such municipalities as Philipstown, the villages of Croton and Buchanan, and City of Peekskill to cooperate with it in pooling road machinery, vehicles, and other expensive equipment.

Supervisor Richard Shea described the measure as another step “toward consolidation and sharing of services. It takes the burden off taxpayers” if not every municipality must own every piece of machinery or equipment required for road upkeep and related operations, he said.

Shea also pointed out that the town wants to continue efforts to consolidate the town and Village of Cold Spring building departments and collaborate on such improvements as the planned Hudson River Fjord Trail between Cold Spring and Beacon. “If we don’t,” proceed in that direction, “we’re going to suffer the consequences” through loss of state funding, he warned.

In yet another government-to-government move, the board agreed unanimously to join in a Putnam County hazard mitigation program, to survey areas at risk and address the threats. The planning effort stems from the realities of recent storms. “After Hurricanes Irene and Sandy it became very evident where our hazards are,” Councilor John Van Tassel told his colleagues. The town then applied for grant money to devise a mitigation plan, but instead the money was dispensed at the county level, he said.

Shea added that participation in the county program enhances the town’s eligibility for other federal and state assistance.

Seeking feedback, the board sent to Putnam County and the town Planning Board a proposal for rezoning the Countryside Motel, located at 3577-85 Route 9, on the northern edge of town. Shea explained that at present the motel falls under the regulations of the office-commercial zoning district, which prohibits lodging services. Rezoning the site as a highway-commercial property takes care of the anomaly and allows the motel owner to make improvements, he said.

A written report submitted by Highway Superintendent Roger Chirico revealed a hindrance, at least temporarily, to the planned Indian Brook culvert project. “The DEC has temporarily suspended the permit for the work to be done on the Indian Brook Road culvert by the intersection of Route 9, until the New York State Office of Parks, Recreation and Historic Preservation is satisfied with the design plan,” Chirico wrote.

He stated that because the road is in a historic district, “care must be taken to preserve the historic integrity of the area.” Chirico added that he and Ron Gainer, the town’s consulting engineer, and DEC and state parks-historic preservation staff met March 27 to review designs for the project and discuss its impact. “We are waiting to hear from these departments so we can start moving forward and repair the culvert,” he said.