Weekly email report defines the seasons for us

After a harsh winter of prolonged cold with snow and ice always underfoot, spring feels especially welcome. Just some sunshine on the face or the lengthening daylight or the sight of daffodils or forsythia blooming can cheer a darkened spirit. Everyone embraces spring to one extent or another. Most have time for only a little of its expression.

All around us of course, up and down the length of the Hudson Valley, the renewing cycle of natural life is breaking forth in great wonder and complexity.

Among the observable phenomenon underway are:

These and many other reports come from an email blast that weekly advises anyone interested what an informal network of Hudson Valley watchers have observed in the woodlands, waterways and along the riverbank from Albany to the New York Harbor. The Hudson River Almanac was into crowd sourcing long before the digital term entered the culture. In fact the weekly compendium, having just celebrated its 20th anniversary, helped pioneer in the effective uses of email.

“Our culture has undergone a dramatic change in the last 100 years or so as we have seen far fewer farmers and many fewer people who make a living on the land or in the water. As little as 25 to 30 years ago, river communities had friends and neighbors who fished and crabbed and they all knew the fauna, and especially the natural cycles of the day like tides, sunrise and sunset. The Almanac tries to at least put those words back into the lexicon of the communities,” said Tom Lake, estuary naturalist with the New York State Department of Environmental Conservation (DEC) where the Almanac originates.

Lake edits the Almanac, adding observations of his own as well as educational explanatory notes and gentle corrections when a correspondent may have erred in their identification of a species or activity. Sometimes an excited wolf sighting is really a breed of coyote with a deep history of sometimes cavorting with the odd wolf. 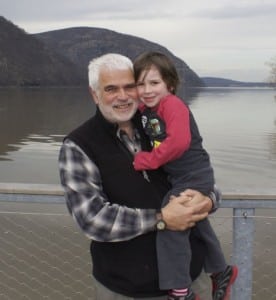 Reading the email regularly is akin to taking a broadly organized course in natural science complete with fellow student enthusiasm. Lake is an adjunct professor of anthropology at Dutchess Community College and lectures frequently at public venues on river valley geological and anthropological history. At those events he recruits new correspondents and readers. He said approximately 6,700 people receive the email each week.

Lake said that the Almanac helps to define the seasons for readers by bringing out a whole host of details. “Seasons come in stages. Defining those stages brings awareness. Not everybody has the ability to take the time to be out there. A lot of people have told me this allows them to be outdoors without being outdoors,” he explained.

“The other thing I like is one of the interesting phenomenon we have in the Hudson Valley in that seasons do not arrive uniformly. You have ice in the Adirondacks while people are in shirtsleeves in Manhattan. Elevation differences can mean big weather differences. The ability to link 320 miles of the river appeals to people,” Lake said.

The genesis of the Almanac came in the 1990s as a group of fishermen, hunters, hikers, and environmentalists formed a citizen’s advisory committee for the DEC. Lake recalled that they often spoke before meetings exchanging tales of wildlife sightings, the fish that got away and other outdoor experiences. Lake and others agreed that capturing these stories would add to the public consciousness about the Hudson River Valley.

The effort started out as an annual book but thinking moved toward more frequent use of the received information. Beginning on the vernal equinox March 20 is seen as significant in celebrating the natural world. The switch to email as opposed to people mailing letters had consequences as older people with no access or interest in the then-new technology dropped away. But Lake thought it important to go out and visit people to hear their experiences and share their knowledge of the interconnected natural world, which was intrinsically bound up with their lives and he did so for years.

Asked about trends he has seen over the two decades editing the Almanac, Lake is quick to emphasize that 20 years is not very long and therefore any conclusions drawn would be tentative at best. He mentions the increased presence of black vultures and harbor seals as examples of interesting but not necessarily indicative signals of either climate change or specific new river conditions.

“The question about trends is dangerous territory because there is so much we don’t know. You need 50- to 100-year trends to understand why a bird or fish species is present or not in a given area. Climate change broadly has that data. But applying that data locally requires more local information over time. Glass eels couldn’t be found the first five and six years of looking but with more nets in more places we find hundreds so it was good we didn’t conclude they were disappearing because of climate change.

Lake readily appreciates that people want to share observations and excitement with others, they want an audience. But he stresses that he works to authenticate and organize material with a focus on the wildlife and the river rather than on the correspondents. Although a week’s report can see a dozen or more short reports, he publishes much less than he receives.

And while the Almanac celebrates the whirl of nature’s turns it does not shy from the melancholy aspects of the encounter with wildlife. Lake mentions a recent report of a dead harp seal found off Croton Point. A Long Island research organization has said they will investigate possible cause of death. Lake believes such mammals enter the river because they are ill. The Arctic-based snowy owl has enjoyed some notoriety with its appearance this winter. But while it is an entrancing bird all puffed up with their feathers, Lake said they are actually starving, driven from their northern habitats in search for food. Many, he said, will die in the Hudson Valley trying to adapt to different foods from the lemmings they historically fed on. Lemmings are scarce these days in northern regions.

To find the Almanac go to dec.ny.gov.