Walk into any garden center now and you’ll be confronted with a wall of pallets spilling out plastic bags filled with chemicals to dump on everything growing in your yard. Whether you want to make things grow or kill something — plant or insect — there’s a special mix for it, and sometimes you can get all three in one bag. The promise of perfection and all that’s required is a spreader.

Fertilizing isn’t always necessary and over the next few weeks I’ll cover the basics for perennials, vegetable gardens, trees, and shrubs. Since plants get nutrients from soil, the first step is to analyze what’s in your dirt. Soil is affected by many factors, including climate, parent material, topography and climate. Your yard might have several different types of soil with different nutrients and different pH balances. Don’t assume that it’s all the same, but test various patches. 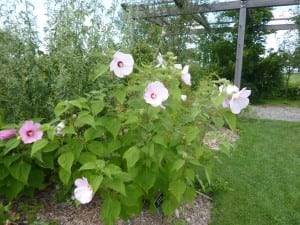 The pH of the soil, whether it’s acidic or alkaline, determines the availability of nutrients, and soil type, which varies from sand, silt, loam and clay, determines how well the soil will hold water for plants and how much air flows through it. It’s important to pay attention to both.

Once you know what you’re working with in the soil, you can determine what the plants in that spot might need. Commercial fertilizers contain three active ingredients — nitrogen, phosphorus and potassium, designated as N, P and K, and three numbers, such as 5/10/5, indicate the amount of each in the bag. The rest of the bag is made up of inactive ingredients. The rule of thumb is nitrogen for shoots, phosphorus for roots and potassium for flowers and fruits. Organic fertilizers are made from organic material and micronutrients.

When fertilizer is applied incorrectly and in amounts greater than what is needed by plants, it runs off the area or leaches away. Runoff nitrogen has caused the de-nitrification of salt water and phosphorus, which is banned for use on lawns, causes algae to grow in fresh water, depriving fish and plants from oxygen. Consider the environmental consequences before deciding to take that bag of commercial fertilizer home.

Q: I have a flowerbed on each side of my front porch. It’s a mix of rudbeckia, coneflowers, sunflowers and a few annuals, like coleus. In several years, I’ve never added anything to it and the flowers seem fine, should I add fertilizer anyway? What should I use?

A: Adding organic matter, like compost, to a flowerbed in the spring is probably all that the perennials need. An inch or two of compost filled in on top of the existing soil, it doesn’t even need to be worked in, can give your plants all the nutrients they need if the soil is relatively healthy, which it sounds like it is. Since several years have passed from the initial planting, testing the soil is a good idea, too. It doesn’t need to be done annually; every three to four years is adequate. Adding fertilizer would probably overfeed the plants making them leggy and it won’t add to blooms.

Q: The peonies I planted five years ago bloomed robustly for the first four years and then last year, weren’t as prolific. Will they have more flowers if I fertilize them?

A: An organic gardener would add a couple inches of compost every year and that should be sufficient. The change in blooms could be affected by other factors, too, like rainfall and temperature. Test the soil to see if it needs additives before applying a chemical fertilizer. Adding compost won’t do any harm either way. If the soil is deficient, adjust it accordingly with a low nitrogen fertilizer such as a 5/10/10. The North Carolina State Horticulture site states: “Over-fertilization, especially with nitrogen, usually results in weak stems and reduced flowering.”

Q: A tree is partially shading a flowerbed that used to get full sun. Will fertilizer help overcome the lack of sun?

A: No. Poor soil quality will contribute to the plants’ problems, but fertilizer won’t make up for lack of sunlight.

3 thoughts on “Roots and Shoots: Making Sense of the Fertilizer Aisle”