In what amounts to an amazing coincidence, two children from Garrison were invited to the White House as part of a contingent of seven “kid reporters,” to visit with and interview First Lady Michelle Obama on her Let’s Move agenda. And, neither knew the other was coming! The kids, 10-year-old Zack Shannon and 6-year-old Clara Tripp, are both bloggers — and have moms, Stacy Morrison and Suzanne Murray “in the business” — the business being online news media, and the invitation extended from an outreach by the White House Digital Media department. 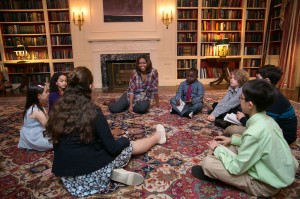 The visit took place Monday, April 21, the day of the annual White House Easter Egg Roll, at the White House Library, which they reached after clearing security and then, like many a scribe before them, were issued press passes. After they visited and learned about former First Ladies in the First Ladies’ Parlor, Mrs. Obama (described separately in each young reporter’s blog as “nice”), joined them on the carpet for a press briefing and Q-and-A session, nearly all related to the healthy initiative on eating she began four years ago.

Here is Zack Shannon’s description of the first portion of the meeting:

I felt almost as comfortable with her as I would with my best friend.

When she walked into the room, she told us all to go ahead sit down on the floor. “Let’s get comfortable,” she said. I had to wait a while before I could ask my question, because all the other kids were asking questions rapid-fire. My favorite question was, “Do you think you will run for president after President Obama’s term?” She said, “I’d certainly like to see a woman president, but no, that’s not for me. I think I will continue by being of service, continuing the work that Barack and I have started to help all children.”

The First Lady provided the young reporters with information on the Let’s Move program, discussing the recent decrease in early childhood obesity rates, with cautious optimism and a call to not sit back and relax. She spoke of family conversations about what food is eaten and what is in that food. And, as excerpted from Clara Tripp’s CafeMom blogpost, she made these points:

1. You can eat French fries and chocolate. (Yum!)
“Splurging is the key to life,” Mrs. Obama said when asked about eating treats. “How would you appreciate vegetables if you never had chocolate?” I think she’s got a good point. The First Lady says that if kids are “eating right 70 percent of the time then having that splurge or that snack, it’s not gonna hurt you.”

2. You get to play a lot!
“The thing we want kids to know is that exercise isn’t just hard work, it’s play,” Mrs. Obama said. “I mean, if you’re running around with your dog, you’re getting exercise.”

3. You get to drink water — and seltzer is my favorite drink. According to Mrs. Obama, drinking water is really important … “The more water you drink, the less room you’ll have for the junk and water is a better source of hydration for you guys,” she said.

After photographs and coverage concluded, the kids were invited to participate in White House Easter egg activities: the hunt, egg dyeing and Easter Egg Roll, where the theme was “Hop Into Healthy, Swing Into Shape.” These traditional activities have been joined by more active ones: obstacle courses, hula hooping and games. Naturally, healthy fruit snacks were provided and water was the beverage du jour for the more than 30,000 attendees.

As Clara’s mom Suzanne Murray reported in her blog,

This was the first Kid Reporter Gaggle at the event, and it makes sense that Mrs. Obama would meet with kids to talk about an initiative that’s really focused on reaching them. “That’s who we’re really targeting. It’s hard to change habits of people when they’re older, which is why we work with kids, right? Because if we help you develop your habits at a young age, then you won’t have anything to fix, it will just be the way you live your life. You’ll be used to eating vegetables and fruits and getting active. It will just be the way it is. It will be normal.”

As for Clara (who also wrote a blog post with her impressions of the day) she reported: “It was exciting to meet the First Lady and talk to her in person. I learned about her Let’s Move program and how kids should stay healthy. They should drink a lot of water, eat healthy foods, and exercise.”

Zack’s mom Stacy Morrison noted in her entry on blogher.com, that “he got a bit more amazed about what had just happened as the day went on. By the time we were on the train home to New York City, he was chattering on about getting to speak with the First Lady at a volume intended to be juuuuuuuust loud enough for our seat mates to overhear.”