Putnam County Sheriff Donald B. Smith reported that Deputy Sheriff Johnathon Cihanek was recently honored by the Southern Dutchess Exchange Club for acts of heroism which occurred at a Putnam Valley home Dec. 18, 2013.

Deputy Cihanek was on patrol when he was dispatched to a private residence to check the welfare of an elderly female. 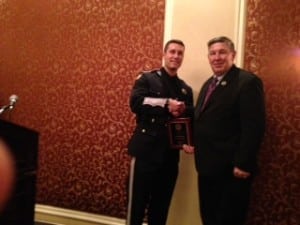 Cihanek knocked on the front door and got no response. He entered the residence through the unlocked front door and noticed two dead dogs on the living room floor. Believing the animals suffered from carbon monoxide poisoning, the deputy left the building for fresh air.

A short while later, Cihanek reentered the residence and found the unconscious homeowner on the floor of her bedroom. He dragged the woman out of the residence and administered oxygen. The resident regained consciousness and was transported by ambulance to a nearby hospital.

Further investigation revealed that carbon monoxide was not present. Apparently the homeowner euthanized the dogs and attempted suicide by drug overdose.

In presenting a plaque to Deputy Cihanek, Andrew Trivero, president of the Southern Dutchess Exchange Club, praised him saying that the deputy displayed exemplary courage and determination in searching a residence that he believed to be filled with carbon monoxide in order to save the life of the homeowner.

Each year, the Southern Dutchess Exchange Club honors first responders for the work they do day to day.