A long-pending but oft-troubled culvert project on Indian Brook Road, a colonial-era dirt lane, hit a new obstacle recently when the New York State Department of Environmental Conservation suspended its permit for the work – only three weeks after issuing it – over concerns that the project threatens the area’s historic quality.

But Philipstown Highway Superintendent Roger Chirico, overseeing the project, remains undaunted and has referred to the hold-up as temporary. 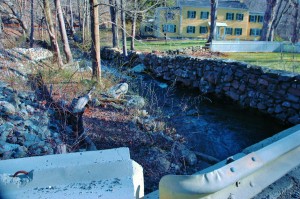 The brook and edge of the culvert/bridge, with the historic DeSilva house.

Chirico says the project involves replacing a deteriorating culvert — also called a small bridge — over Indian Brook, a rushing and flood-prone stream, near the intersection of Indian Brook Road and Route 9. During an April 21 interview with Philipstown.info/The Paper in his Highway Department office, he referred to the area’s persistent water problems and said the project is designed “to eliminate the flooding. And the culvert is in bad shape anyway. The culvert has to be replaced. You just can’t have this culvert there and keep having all this washout.”

Hurricane Irene in 2011 caused floods, damaged the road and adjacent land, and wrecked elements of a culvert upgrade Chirico had begun shortly before the storm.

However, the State of New York has reservations about Chirico’s current plans. Writing to him March 19, the DEC said that because the state Office of Parks, Recreation and Historic Preservation had questioned the project — belatedly, it seems — DEC was suspending the permit it had granted Feb. 24. A separate letter to the DEC from John Bonafide, director of the technical preservation services bureau in the park department’s Division for Historic Preservation, said that “the alteration of the culvert and the surrounding environ has the strong potential to adversely impact the historic district” on Indian Brook Road.

Part of the old Highlands Turnpike, Indian Brook Road is one of only two dirt roads in the state that largely on their own merits comprise National Register of Historic Places districts. The other road, also in Philipstown, is Old Albany Post Road.

The new culvert/bridge would be about 9 inches wider than the existing one and 40 feet would be paved to protect the structure. Under plans drawn up in 2013, four major phases of construction include (in part) closing the road, installing a silt fence, removing guide rails and trees, digging a temporary stream diversion channel and lining it with stone, installing temporary pipes, taking out the “existing failed stream crossing structure elements,” installing new bridge deck panels, lining the stream bank with stone, subsequently removing the various temporary structures and pipes and back-filling the temporary stream diversion channel, and, in the final phase, finishing various aspects of the project, widening and resurfacing the road, putting a new rail in place, and re-opening Indian Brook Road. 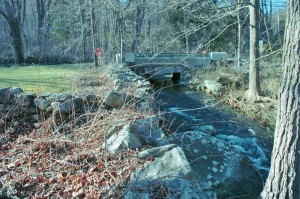 The Indian Brook culvert, slated for an upgrade.

The present concrete culvert stands on steel supports and “both the concrete and steel have become severely deteriorated, necessitating the replacement of the structure,” Chirico informed the DEC in an April 3 letter responding to the state critique.

The area around the bridge contains signs of work previously undertaken and Chirico wants to deal with water problems decisively this time. He said Philipstown will fund the work with $50,000 in town money and $59,000 from FEMA, the Federal Emergency Management Agency, but he is unsure what the final price tag might be. “It depends on how long we keep going,” waiting to begin, he said. “Prices escalate if you don’t do anything.” Likewise, the FEMA money is at risk, he said. “If we don’t use it, we lose it.”

Last summer, the town government sought proposals from outside contractors for the work. The resulting nine bids ranged from $263,000 to $484,920 but on Aug. 1 the Town Board rejected them all, worried about the affects on emergency service operations of closing Indian Brook Road at Route 9 while other nearby roads underwent repairs and were either closed or of limited use.

A road steeped in history

In writing to the DEC, Bonafide of the parks’ department described Indian Brook Road as “a rare surviving example of New York State’s 18th- and early 19th-century transportation and community development history.” He likewise observed that “local residents have raised several issues with our office regarding this” project.

Barbara DeSilva, whose 18th-century farmstead lies just downstream of the work site, fears Chirico’s plans could harm her property. A private engineer she hired suggested an approach that differs from Chirico’s.

The road “is an important cultural resource,” DeSilva said. She and her husband own Littlebrook Farm, which includes their house, believed to date from 1759; green fields, old barns, and lawn, edged by Indian Brook and the road sharing its name. “I want this work done, and I want it done correctly. I don’t want my property ruined,” she said last week. She remembers the watery mess of 2011: “After Hurricane Irene, it was a total disaster.”

Chirico recalled that during the 2011 flooding, the water “went all down through her yard. I really don’t blame her” for her apprehension and attention to details of the plans now, he said.

The hurricane damage closed Indian Brook Road for a time, frustrating residents who complained to the Town Board of having to drive circuitous routes to their homes and wondered if emergency responders could reach them in a crisis. Eventually, the traffic flow resumed and Chirico developed his latest plans for the culvert. And in February, DEC granted its permit.

Then the parks’ department intervened.

In his March 14 letter to the DEC, Bonafide admitted that “our office failed” earlier “to recognize that the culvert is within the National Register-listed” historic district. However, he also raised several issues, noting that the present road is about 13 feet wide. “This historic width is critical … and should be retained in the project zone,” he said. Likewise, he directed that paving be minimal and mimic the dirt road surface. He also stated that “the stone walls along the creek … contribute to the setting and character of the overall historic district. Reconstruction or stabilization of these structures and the bank must be in keeping with the rural character now present at this location.” He recommended that the state agencies confer “to find feasible and prudent means to avoid or mitigate any direct or indirect impacts associated with this proposal.”

Neither the DEC nor Bonafide’s office responded to requests for an update on the status of the project. Chirico’s office also had not heard anything further from the state as of April 23.

Efforts to resolve the issues

On March 27, Chirico, Philipstown’s consulting engineer Ron Gainer, and representatives of DEC and the state parks’ department met. Chirico said April 15 in a phone conversation that he awaited follow-up correspondence from the state but got the sense March 27 that “it was likely we will get the permit back.” He said the project was delayed “not for any engineering study or the actual design” of the repairs but because of state doubts about such things as the color of materials used.

In his April 3 letter to the DEC, Chirico went over the various issues the state raised. He pointed out that “the present culvert is approximately 17’ 3” wide. The replacement is intended to be 18 feet wide,” made of typical pre-cast reinforced concrete panels — as opposed to customized panels, which cost more. “On either side of the culvert, the roadway will transition back to its existing width,” he wrote.

“We’re not here to make the road wider” but to replace the culvert/bridge, broadening the road minimally as necessary, he explained in person April 21. He also promised that “we will save the stone walls and put them all back.”

Discussing stone walls in his April 3 letter, he declared that “the town has always recognized the adjacent property owner’s concerns over potential impacts to stone walls in the vicinity of the structure.” He said his plans “already specify that the existing mortared stone walls adjacent to the culvert abutments be protected from damage.” Furthermore, he assured the state, “a previously existing stone wall along the northeast side of the project limits, which had to be removed during the town’s prior installation of the rip-rapped diversion now in place around the culvert, will be replaced in kind using the very same stones,” stored on site.

Chirico concluded in the letter that “the town believes it has been very responsive to concerns of local residents and of the historic nature of the area.” He expressed hope the state will rescind the suspension and “fully reinstate the permit so that the culvert may be replaced without any further delay.”

DeSilva emphasized that she, too, wants the road and bridge fixed — properly. “I’m not holding it up,” she said, noting that in 2007 she had called Indian Brook to the town government’s attention. “It’s been a long, grueling thing,” she said. “Had they taken care of the road, really repaired it years ago, this [current situation] wouldn’t have happened.”

A day after the DEC issued the now-suspended permit, DeSilva’s engineer, Matthew Noviello, stated in a memo to DeSilva that “currently more rainwater runoff comes down Indian Brook toward the existing bridge than the bridge can allow underneath.”

Nonetheless, Noviello opposes simply enlarging the bridge to allow more water to flow beneath it, without upstream remediation. He warned that increasing the size of the bridge might relieve upstream flooding but that “the disadvantage is that it will increase the likelihood of flooding on the downstream side of the bridge. Since your house is on the downstream side of the bridge, and you saw the massive flooding caused by Hurricane Irene and the increased water flow from the 60”-diameter temporary diversion pipe that was installed by the Philipstown Highway Department just before Hurricane Irene, you know what will happen to your house if the size of the bridge is increased. You will continue to experience major flooding.”

As an alternative, Noviello suggested use of a temporary retention pond upstream and letting the road act as a sort of dam, with the bridge serving as a spillway, during heavy downpours. That way, “when it rained more than 4 inches,” he predicted, “the land upstream of the bridge would flood — as it does now; the road would dam the water and prevent it from flowing toward your home; and the existing bridge opening would only allow as much water as the portion of Indian Brook near your home could handle.” He said his method “would allow Indian Brook Road to go undamaged during a storm, the bridge to be undamaged, and your home to be undamaged by flood waters.”