Beacon business rolls on with expansion

In a perfect world, everyone would have affordable transportation to get to work, to school, and to the store. Fresh produce could be easily transported to whoever needs it. Epic snowstorms couldn’t keep you from your destination. No one would fight over parking. This is the greener, safer and happier cycle-centric world that Jon Miles envisions … starting with Beacon. 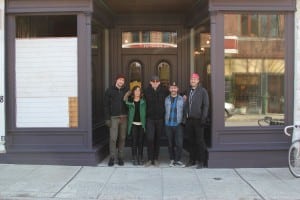 Miles has been making moves toward this goal since landing here five years ago. In 2009, he opened a barebones bike shop in a tiny side-street storefront, where he also squatted for a while. An official name, Peoples Bicycle, followed shortly after. In 2012 he moved the business to a warehouse on the outskirts of town. He installed several new bike racks in front of the Key Food grocery store and helped local grassroots organizations with a successful effort to paint “sharrows” (shared lane bike markings) on Beacon’s mile-long Main Street. Miles has otherwise kept a low profile, casually building a clientele of discerning cyclists that feels more like a club than a business.

A self-described “old-school bike shop with new-school style,” its very name suggests utility and equality (the logo is a Soviet propaganda-inspired image of a worker’s fist holding a wrench). Their bread and butter is affordably priced vintage, used and refurbished stock. Unwanted bikes are collected for donation to communities in need. But when the more established Beacon Cycles closed last year, Peoples Bicycle became the city’s only local bike shop and Miles realized he needed to “step up his game.” This summer, he will hang out his shingle on Main Street for the first time, in a former bar below a still-active Single Room Occupancy. A sign of the times.

In 2012, Miles gave up his lease on South Chestnut Street and moved to the 3,000-square-foot warehouse on Maple Street, where storage was ample and he could grow his burgeoning cargo bike business, Peoples Cargo. He found the new retail space around the same time but renovation proved to be a major endeavor. The roughly 700-square-foot space, which was already partially gutted, required a complete rebuild. In exchange for the work, he was given a reasonable lease for which the rent has already been paid upfront.

Renovations have shown significant progress in the last few months. A new concrete floor was poured just last week. The eye-catching front doors were found in Brooklyn and some of the windows are also repurposed, but most of the interior will be new and customized. “We had to be very smart in a small space,” said Sarah Womer, newly appointed business manager for Peoples Bicycle and Peoples Cargo, referring to the creative placement of storage and displays.

Peoples has transitioned into selling more new bikes and will have 30 to 35 in stock at its Main Street location. Currently they have 70 new bikes in stock at their Maple Street warehouse and temporary retail space. Aaron Hawkins, Kyle Helland and newbie Bryan Richardson, plus Womer, comprise the full-time staff. Gus Mustakas, formerly of Beacon Cycles, has been instrumental in the company’s transition to high-end bikes and high-performance bike service. He is acting in an advisory capacity. 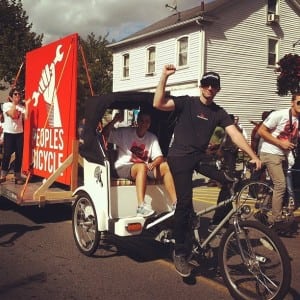 “Everything for us is a compromise. I wasn’t happy at first about selling new bikes. We were changing people’s minds about refurbishing and creating a more sustainable model,” Miles said. “But it’s more competitive now that NYC and other cities on the East Coast are absorbing the same stock. Riding an old bike has become part of the sustainability lexicon. It’s a statement now. Used bike wholesalers have become some of the best hustlers.”

Peoples will also be sponsoring road cyclists for the first time, a group called Beacon Endurance. “They were looking for a shop that was interested in high performance but that wasn’t exclusive, a community-style shop,” explained Miles.

One wonders where Miles and Womer find the time for their many grassroots projects. He will be experimenting with his pedi-cab by loaning it to trained drivers to make their own cash, sort of like a taxi medallion but without the fee. The company is participating in a bike share program at the new Space Create co-working space now under construction in Newburgh. Their “Tuesday Night Ride” social circle of bikers are being recruited to help the staff at Common Ground Farm on Second Saturdays. A tricycle and some helmets are being donated for a Bike Rodeo in Newburgh on Saturday, April 26. Womer, who also runs Zero To Go, can often be seen with the Peoples Cargo bike picking up compost or transporting recyclables to Beacon’s ReCommunity plant.

From recreation to transportation

When Beacon was covered in three feet of snow, it was hard to imagine anything on the road but plow trucks, much less bicycles. The team at Peoples considered the extreme weather an opportunity to demonstrate that biking in this city can grow from a seasonal pastime to an everyday commuter lifestyle, from recreation to transportation, and they were out there proving it. The Peoples Cargo bike, a pedal-assisted, electric-powered vehicle that can be almost completely enclosed, keeps going when everyone else is off the road. 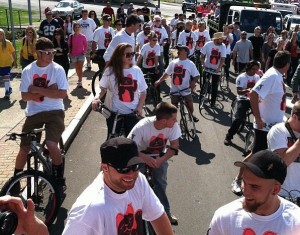 The first B2B client for Peoples Cargo is not a small one. The Whole Foods’ Third and 3rd flagship location in Gowanus, Brooklyn, will use one of his electric-assist cargo bikes for home delivery, outfitted with a sophisticated, custom-built endothermic refrigeration system.

Peoples’ core philosophy is making sure anyone who needs transportation gets it, no matter what their income. For Miles, it’s an issue of quality of life and about setting an example of sustainability for other small cities. “It’s important for us to keep bikes rolling. Whether it’s old three-speeds or a Walmart commuter bike, we’re going to focus more on what can be done with them, aesthetically and functionally, to make them safer, better and easier to ride,” said Miles.

“We realize that Beacon is changing and we have to adapt,” he said. “But we are not going to forget that any bike that comes in deserves the same amount of attention as any other.”