Although that primeval forest feeling occurs when one is walking along Boscobel’s Woodland Trail, the trees and other greenery are of far more recent stock. This particular stretch of woods was clear-cut during the Civil War, the trees taken down and used as firewood to fuel furnaces of the West Point Foundry. Later the Eastern hemlocks dotting the bluff were cut down for a different purpose, their tannin-rich bark used by 19th-century fur trade tanneries. The ground below has some age on it, about 12,000 years’ worth, its glacial till dating back to the melt of the great ice sheet. The 1.25-mile-long trail itself meanders up and down and around the curves of the 29-acre forest immediately south of the Federalist mansion. 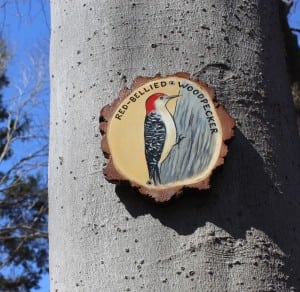 The Red-Bellied Woodpecker sign mounted on a tree on Boscobel’s Woodland Trail of Discovery.

Opened first in 1997, the trail was extended in 2010, in an offshoot down to Constitution Marsh, and this year has undergone another upgrade, this time focused on orienting visitors to the history and natural history of the site and its nearby neighbors.

Newly re-dedicated as The Frances Stevens Reese Woodland Trail of Discovery, enhancements include 36 plaques depicting local birds, plants and wildlife, painted on wooden lumber discs by artist and Boscobel board member Stacey Farley, as well as four text displays providing context and interpretation through a number of subject areas. Trails were cleared with fresh woodchips laid down by Keegan Creamer as part of his Eagle Scout project for Troop 45 of Cortlandt Manor. This elaboration on highlighting and explaining the landscape is part of Boscobel’s renewed emphasis on education.

Boscobel Executive Director Steven Miller explains, “While the trail is a wonderful asset for Boscobel, it is now a heightened educational component that will be used by everyone enjoying the natural setting.”

To celebrate, Boscobel held a ribbon cutting ceremony April 19. Doing the honors were Farley and her fellow board member, Alexander Reese, son of the trail’s namesake, Frances Reese, the environmental activist most prominent for spearheading the fight against the construction of a hydroelectric power plant on Storm King Mountain. After the ribbon was cut, a trail walk began, replete with a nature scavenger hunt for the many children in attendance. This was followed by a presentation on wolves and their relationship to the environment by the Wolf Conservation Center, and the star appearance of their ambassador wolf, “Atka.”

Stacey Farley, who created the new ”discovery” plaques, near her American Beech marker.

Farley, who holds a B.A. from Brown University and a MFA from the University of Illinois in Chicago, both in art, also spent a year at the Pennsylvania Academy of Fine Arts. Largely working in the medium of ceramic tile, her usual “fun, dusty work,” utilizes photographic transfers, three-dimensional bas relief and silkscreen as well as hand-painting. Farley describes her work as reflective of the “environment, community, history and architecture of the site where the art is installed.”

Her work, often transportation-themed, is, she writes, “about humanity … about work, change, progress, technology and invention” and has been installed by entities such as the Metropolitan Transit Authority and the Palisades Park Commission, at train stations, museums, gardens and now, in a different, but connected vein, in a forest.

For this project, which was originally funded by a grant from the Malcolm Gordon Charitable Fund to support interpretive signage, the goal was to create a self-guided hike with which to inspire families and individuals to return to repeatedly. For her contribution, which began with a thought of making a dozen signs and grew from there — “I kind of got really into it,” she says — Farley began by walking the trail identifying trees and birds with Eric Lind, center director for Audubon’s Constitution Marsh, an expert on ornithology and regional ecology. 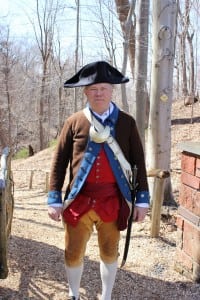 Together they struck a balance between what Farley calls her penchant for “really colorful” birds and Lind’s preference for spotlighting some of the many “small brown birds” which he felt were most significant to this area. “Eric was really helpful — he’s just so knowledgeable,” Farley said.

Beginning with a locust tree log, which was then, according to Farley, “sliced like a loaf of bread” by Garrison master furniture designer Tom Ptacek, 36 discs with bark intact were cut, upon which the paintings, made from acrylic paint and many layers of varnish, were made. “In theory the locust is so dense it shouldn’t rot. It’s a very rich, textured surface” upon which to paint, Farley said. These log “plaques” were then screwed into the appropriate tree or habitat, at differing levels relating to the subject matter depicted. “The genesis of the project is that not every kid belongs in the mansion; we needed another place,” says Farley.

Experts in three fields were brought in to write text for the four informational panels.

Lind details topography, wildlife and natural life, which populate the area. His text notes the ecological threats which constantly threaten this environment.

The words of Edward Lenik, a regional archaeologist, and author of a number of books on Native American rock art, are found on two related panels. In one he writes of the history of the Native Americans of the Wappinger Confederacy, and in the other, titled ‘A Sacred Place,’ he speaks of their daily, seasonally-oriented lives and of Manitou, described as “the force, power and spiritual energy present in all things.” Lenik walked the trail in preparation, and, coming to a spot down by the Hudson, halted, stating: “This is the sacred spot.”

These new additions are joined by Boscobel’s newly-designed map and trail guide and an audio tour of recent vintage, which “puts the woods into a local and regional context of nature and conservation preservation,” Miller said. Added to the mix is the second season of lunches and refreshments provided by Cold Spring restaurant Hudson Hil’s Café, after a successful launch last year. “We want people to come for a walk, pick up a picnic lunch and enjoy the view … and we’re committed to making sure the outcomes are of the quality you expect from Boscobel,” Miller said. 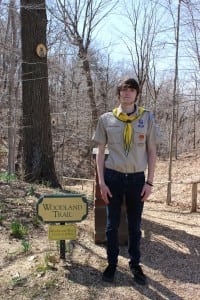 On top of these enhancements, Boscobel has stepped up its children’s education programming, both on and offsite, beginning with the hiring of Lisa DiMarzo, formerly of the Children’s Museum of Poughkeepsie, as education director. DiMarzo, working first on historic topics and now moving into natural history-oriented themes, has developed a series of workshops tailored to required school curricula, one invoking mock loyalists versus patriots strategizing as soldiers and townspeople, and another which asks “What happens when the war is over?” addressing the Federalist period.

Another, called “My Five Senses” compares life then to now using the senses. Visiting school groups can do a modified mansion tour augmented by rotation stations featuring quill pen writing, games of the early 1800s and Hudson River School landscape drawing. DiMarzo will offer preschool playgroups and a preschool program, Rhymes by the River, utilizing Hudson River-related rhymes this summer, as well as a “day at Boscobel” for visiting summer camps.

“What Boscobel wants to be is more than a mansion — much, much more and we want to give visitors a reason to come back again and again,” says Miller. “We’re doing this through all of our new educational programs, our Boscobel Style lectures and of course the Farmers’ Market.”

“We’d really like people to become members,” adds Farley. “All of these things are reasons to come back. It’s such a treasure, known across the country and now we want to make it more known throughout the community.”