Damon Banks and his brother both went to Manhattan’s High School of Music and Art, both admitted under the “art” category, but even then, Banks had a hankering to become a musician. Taught to play bass by that same brother, Banks switched art forms at Fisk College, where he earned his degree in music. 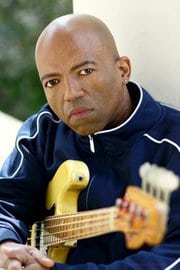 Touring heavily for years after graduation, he eventually stayed in one place for longer stretches, changed that “one place” to Cold Spring about 10 years ago, and recently, in between continuing to play gigs and teaching, wrote, arranged, produced and recorded his first CD, Travelguides, recently released. The CD took about three years to record with the songs themselves written over a six-year period. It signals the start of what Banks hopes will wind up being a collaborative odyssey, using his music together with other art forms — dance, visual arts, other musicians, film — to create multi-media projects.

Travelguides conceptually reflects the sights and sounds of Banks’ life traveling the world as a professional musician. But it goes beyond the act of traveling. Evocatively named tracks, among them Children of Banju, Ocho Rios, Morrisania (The Bronx) and Black Havana are, according to Banks, “a way of conveying a state of mind based on places I have been. Although it’s a traveling record in which the music can set a mood for the listener reminiscent of some of these places, it’s actually more important as an aesthetic. Ocho Rios has a deep impact for me as my mother’s family was from Jamaica. I’ve traveled to Brazil four times; the African continent is related to my cultural heritage — these kinds of pieces are important to me to share.”

Sometimes the songs were named after they were composed, for instance Striver’s Row originally had a different name, but, listening to the melody Banks felt there was something innately inner city about it. Wanting to pick something meaningful from an urban environment, Banks settled on Striver’s Row, recalling that his parents came from Harlem.

“Every song comes about in a different way,” Banks says. “Sometimes a melody pops into my head, ferments, lies dormant for years — you wonder whether it will ever be a song at all and then something changes and you suddenly hustle to get it done.” Others arrive quickly, sometimes spurred on by a visual idea. Acting as arranger and producer taps into other areas for Banks.

“Communication manifests itself through sound, vibration, words, drama. In producing, you develop a story but give folks freedom to elaborate.”

Banks grew up in the Bronx in what he calls a “very artistic, musical, environment with lots of creative support” from his parents — his mother was a school principal, his father a policeman. Although he didn’t formally study music during high school, as music and art focused only on orchestral instruments, he calls this “a blessing in disguise because I learned how to communicate ideas visually, which actually helped my music.”

During his years spent touring, in which he played for numerous artists, including George Benson (for whom he also wrote a song), Peter Gabriel, Caetano Veloso, Angelique Kidjo, The Neville Brothers, and many others, Banks did some composing, but was more engaged in his work as a collaborative musician.

“I had an amazing time doing that,” he said, “and worked on so many interesting projects. But, with the economic climate and all the rest, at a certain point I realized that it would be harder to maintain, and that if I wanted to create that way again, the onus would be on me to create it myself. You have to create your own art. If I had my druthers I’d still be freelancing with many of the people I worked with, but now is the best time to create.” 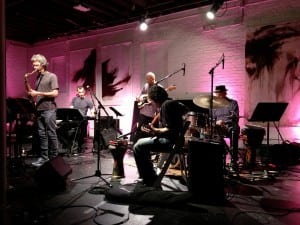 Banks also teaches. His workshop topics include improvisation, spoken word and “mixed world,” in which he uses rhythms and musical tonalities from around the world to help students compose and improvise using non-Western aesthetics and musical environments. For the past six years he has taught middle and high school music at the Poughkeepsie Day School. He has also worked at Beacon’s Rombout School and was the recipient of a Haldane School Foundation grant for global music workshops held as part of the Common Threads programs, which used to be a yearly fixture at the school. He has presented workshops and taught at higher education institutions as well, including Bard College and Cal Arts, among others. He is a recipient of a Dutchess County Arts Council/New York State Council on the Arts grant for his multimedia theater piece entitled Resistance: a Maroon Story.

Banks came to Cold Spring in what is now a traditional way. He and his wife, violinist Gwen Laster (whom he met — naturally, it seems — at the famed jazz club Birdland, where he was in the house band and she sat in one day), came for weekend getaways while living in New York City. It was Laster who suggested the idea of relocating, something, which Banks says, “turned out to be a great idea. By living in Cold Spring we raised the quality of our lives. In this small community in such a beautiful setting, you can collect your thoughts and create a better balance — create time, be in the space to do this. We have amazing friends here. I have access to the community in the city but also have quiet time here. I don’t know if I could have made this record if I wasn’t living in Cold Spring. The community has helped the direction of our careers and has been an absolute asset to our lives. This project is a collection of songs, but relocation helped facilitate a lot of growth and expedited a lot of ideas for Gwen and myself.”

Banks will perform a “Travelguides CD Release Show” on Friday, May 2, at 8 p.m. at the ShapeShifter Lab, 18 Whitwell Place, in Brooklyn. He will return there once a month through July. Other upcoming engagements include a tour in the Netherlands in August. For more information and to listen to more tracks, visit damonbanks.net.