Allison Pataki, author of The Traitor’s Wife, a fact-based treatment of the beautiful and cunning Peggy Shippen, wife of the notorious Benedict Arnold, was interviewed by Philipstown.info at the Desmond-Fish Library in Garrison, just a short distance from her childhood home, as well as the site of Benedict Arnold’s house, and the path he took to escape capture by George Washington and the American forces. Pataki has propelled the book to The New York Times Best Seller list, and film rights may also be in the works. 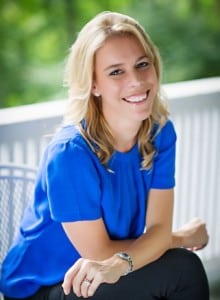 Q: Were you surprised at the overwhelming response your book has engendered?

AP: I was! When I stumbled on the story of Peggy Shippen, her romance with John Andre, her marriage to Benedict Arnold, and the pivotal role she played in the plot to turn West Point over to the British, I realized that I had been gifted with some really dramatic, juicy historical material, which I knew held the fixings for a truly mesmeric tale. I’d hoped people would respond to it, but the enthusiasm has exceeded my wildest expectations.

Q: What influence has growing up in such a historically rich area had on you?

AP: Living in the Hudson River Valley, which George Washington himself referred to as the “key to the continent,” has had a major impact on my life, and my writing. Both the British and the Americans recognized the significance of this stretch of earth on which we are so fortunate to live. Growing up here, history was all around me. You can’t drive half a mile in any direction without stumbling upon a historical marker, and my parents made a point of stopping at each one, for an impromptu history lesson! My father’s career being tied to New York made the state’s significant historical sites all the more accessible to us — Saratoga, Fort Ticonderoga, Long Island — and growing up, we automatically assimilated the history that surrounded us.

Q: How did you approach the writing of a historical novel?

AP: It began with my being gripped by the story of Peggy Shippen Arnold. Once I chose the subject, I started researching, and familiarizing myself with the historical facts — going to the places she inhabited, learning about her life in general, but also, the details of what her world looked like: How did she dress? How did she eat? What was the architecture around her? Then, I started imaging scenes and dialog, developing my characters, and weaving them into the events as they occurred. Because the book is a historical fiction, the plot is more or less informed by the outline of actual events, building to the point at which Benedict Arnold is exposed as a traitor.

Q: Where did you go for your source materials? 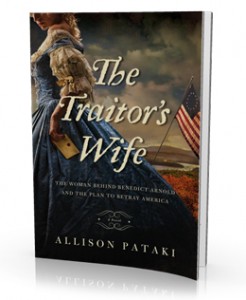 AP: Several good biographies exist on some of the principal players: Benedict Arnold, John Andre, George Washington. For ambience, I visited a number of sites. There is the fine museum at West Point. The old quarter of Philadelphia is remarkably well preserved, and gives the feeling that Peggy Shippen’s carriage might roll by at any moment, although the actual house in which she lived no longer stands. The Metropolitan Museum had a comprehensive exhibit on colonial furniture and women’s wardrobes, including some of Martha Washington’s gowns — although I’m sure Peggy’s would have been more lavish.

The New-York Historical Society has rooms full of colonial furniture, as well as coaches and carriages of the period, silver services, and great old maps. I also visited Colonial Williamsburg, to immerse myself in the period. For fleshing out my characters, nothing is better than firsthand sources, such as the letters Arnold wrote to explain his betrayal, and George Washington’s journal, which logs his bitter disappointment at Arnold’s treason.

Q: What was your personal opinion of Peggy?

AP: I loved her! I would have loved to have known her. I was seduced by her, and also repulsed by her — and I hope that is exactly the response the reader has as well. I love hearing from readers that they are kind of disappointed that she didn’t get her way. They know she shouldn’t have succeeded, and yet they found themselves rooting for her. What extensive research taught me about Peggy’s character was that she was an incredibly intelligent, ambitious, well-connected, beguiling, attractive young woman. She was also flirtatious, charming, and moody, and considered one of the most eligible young ladies in Philadelphia. And she was the ultimate survivor. How ambitious and self-assured must a young woman of 19 or 20 be, to insinuate herself into the middle of a plot between her husband and her former lover, which — if it succeeds — would end the American Revolution?

Q: Did she love Benedict Arnold?

AP: I have no reason to think she didn’t. Once Arnold’s treachery was discovered and they were forced to flee, she remained faithful and devoted to him through a life of hardship and disappointment.

Q: Your Benedict Arnold is portrayed at times much like an overgrown kid — loud, easily directed, easily angered, and easily led down the path to treason. How historically accurate is your portrait of him?

AP: In the many records that I researched, he was described as a very bombastic, loud, outspoken personality. For all his battlefield triumphs, he had almost no success in negotiating human relationships. Although he could be charming and charismatic, he was prideful, and quick to take offense. Arnold made enemies everywhere he went, and often felt misunderstood. He was a difficult personality. I did, however, try to stress the fact that he really had served the Patriot side valiantly, and had he died in battle, he would have gone down as one of America’s greatest heroes.

Q: What are you hoping the reader will take away from a reading of The Traitor’s Wife?

AP: When I came upon the story of Peggy Shippen Arnold and her role in her husband’s treason, I thought, this is a really fascinating slice of American history that not enough people know about, but should. Everyone is familiar with Benedict Arnold, and many know Major Andre. But no one knows Peggy Shippen Arnold — and her story is every bit as interesting, if not more so, than that of the men who were involved.