A set of orders or decisions by the Federal Energy Regulatory Commission in August and January allowed establishment of a new energy capacity zone, effective Thursday (May 1), that —critics claim —could raise costs drastically. Moreover, one adversary argues, the power provided under the new scheme would not serve the Hudson Valley but go to New York City.

FERC based its actions on highly technical reasoning and review of underlying causes, without providing an easily understood definition of “energy capacity zone.” However, Central Hudson Gas & Electric Corp., one opponent of the zone creation, explained in a backgrounder that the electrical grid in New York State consists of multiple capacity zones, reflecting the location of generators and transmission lines. The FERC move combines four zones — including one for the Hudson Valley — into a new single capacity zone that includes metropolitan New York City.

Utilities such as Central Hudson provide electricity to consumers by using electric lines, substations, and other components and charge customers amounts listed on bills as delivery charges. The utilities in turn buy the electricity itself from independent power generator companies, whose fees show up on consumer bills as supply charges. In acquiring electricity, utilities purchase both the electricity and “capacity,” its availability in the generation system.

Grid bottlenecks or tie-ups have prompted worries in the state and beyond, at FERC. Bottlenecks north of the Mid-Hudson Valley “constrain the electric supply to southeast New York and greater New York City area,” according to Central Hudson. With the onset of the new zone Central Hudson and similar utilities are supposed to buy their capacity solely within their zone, presumably easing the bottlenecks but — zone opponents complain — hindering access to cheaper sources.

Backers of the new zone tout it as a way of dealing with the bottlenecks, boosting capacity, and offering financial incentives to energy providers to keep the power flowing.

Already fraught, the debate also became a federal campaign issue last week, when former Rep. Nan Hayworth, a Republican seeking to reclaim the seat she held for one term, accused current Rep. Sean Patrick Maloney, the Democrat who ousted her in 2012, of failing to support legislation in the U.S. House of Representatives to hinder FERC. 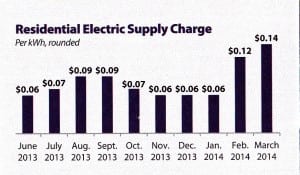 FERC acted as homeowners saw their utility bills swing wildly when electrical supply charges went from 6 cents per kilowatt hour in June 2013, to 9 cents in August, and back to 6 cents from November to January before climbing to 14 cents in March.

This spring, as anxiety mounted, Central Hudson blamed the problem on prolonged cold weather, a related increased demand, and the prices charged by the independent companies that produce power. It assured customers that “Central Hudson does not mark-up or profit from energy supply prices.” Instead, the corporation said, “these fees pass through us” to pay the electricity providers.”

It added that “increased demand for the natural gas used for the dual purposes of heating homes and businesses and generating electricity significantly raises the expense of that fuel” for the power plants.

Capacity zone opposition: bi-partisan and both public and private

Other critics include the New York State Public Service Commission (NYPSC); Maloney and his adversary, Hayworth; Rep. Chris Gibson, a Republican whose district lies just to the north; Rep. Eliot Engel, a Democrat from Westchester County; and State Sen. Terry Gipson, another Democrat, whose district includes part of Putnam County, including Philipstown.

FERC essentially launched the capacity zone Aug. 13, when it concurred with a key player, the New York Independent System Operator Inc., or NYISO, an independent non-profit corporation with expertise in electricity-related projects, on the need for the new capacity zone. On Jan. 28, FERC ratified its approval.

After objecting to FERC’s plans for several months, Maloney delivered a package of citizen protests to the agency in Washington, April 30. “I wanted to personally deliver letters from people all over the Hudson Valley in response to this terrible decision,” he said. “This is an unnecessary and foolish step designed to fix a problem we can fix many other ways.”

Maloney maintained that FERC’s action “would impose an unprecedented $230 million increase in energy costs for our region in just the first year, and nearly $500 million in increased costs over a three-year period. Initial estimates suggest that customers throughout the Hudson Valley could see their utility bills go up by 3 percent to 10 percent.” In late March, he and Engel wrote to FERC’s acting chairperson, Cheryl LaFleur, urging reversal of the capacity zone decision, which they said would have “a drastic negative financial impact on our residents and businesses, many of whom are still struggling to emerge from the recent recession.”

They asked FERC to review various steps, “already underway, that will reduce electricity costs to consumers and businesses in our districts and to address the concerns that led to the new capacity zone’s creation.” As examples, they mentioned “greater investments in transmission capacity and enhanced development of renewable technologies, like solar and wind energy or biomass plants.”

A day after Maloney visited FERC, Hayworth accused him of conducting a “cynical publicity stunt,” asserting that he voted against House legislation that would have given Congress “the authority to oppose the FERC’s unwarranted rate hike in the Hudson Valley. Our representative voted against the bill, and we’ll be suffering as a result,” she said May 1. “If he’s serious about helping us, he should have given us the ability to stop regulatory stupidity.”

However, in March Maloney announced that he and his Republican colleague, Chris Gibson had proposed legislation “to prohibit FERC from approving a new capacity zone that would raise rates for consumers.”

Also on Thursday, State Sen. Gipson urged residents to express their outrage to FERC. Describing its action as “unconscionable and simply wrong,” he promised to “not let my voice rest on this issue and continue to work with anyone to fight Washington’s misguided plan.” Writing to LaFleur in March, he expressed similar dismay about FERC’s decision, stating that “at its heart lies the misdirected punishment of the people of the Hudson Valley for the insatiable energy use of New York City and Long Island,” and that it “provides no direct benefits to people of the Hudson Valley.” He also said FERC does not require energy generators to be in place before consumer costs rise and fails to foster energy conservation.

Central Hudson President James Laurito voiced similar concerns May 1. “This new capacity zone, intended to attract the development of new electric generators in lower New York to address energy shortfalls, will only raise prices for our customers without resolving the underlying energy issues,” Laurito said. He predicted consumers “will be paying up to $89 million more per year on their electric bills, an increase of nearly 6 percent for residents and up to 10 percent more for our largest industrial customers.” Laurito advocated electric transmission development as “a far superior solution, as it will provide needed energy in the Hudson Valley and lower New York without raising prices.”

The New York Public Service Commission long fought FERC and in February asked for reconsideration of the decision. That request was still pending as of April 24, when Audrey Zibelman, NYPSC chairperson, told FERC that “the NYPSC’s initiatives to address congestion and deliverability constraints” in New York “justify rejecting creation of the new capacity zone.” She also cited forecasts of extremely hot weather this summer, which alone could boost energy prices.

“We disagree with the NYPSC that creating a new capacity zone would provide no economic benefits and would needlessly increase customers’ bills,” FERC’s commissioners declared Aug. 13. “We also agree with Entergy Nuclear that the commission [FERC] has long emphasized the need for NYISO to explore creating new capacity zones to send efficient price signals to influence capacity investment decisions. And over the time period” when the decision evolved, they continued, “the need for a new capacity zone in the Lower Hudson Valley has only become more pronounced.”