In choosing a play to launch his newly-incorporated theater company, The Drones, which “celebrates laughter by bringing to life the great comedies of the stage,” Drones Artistic Director Joe Dunn considered about 15 of them. He then decided upon Ben Elton’s Gasping because “It’s both very funny and has something to say about the state of our culture. But the bottom line is: it’s hilarious.” 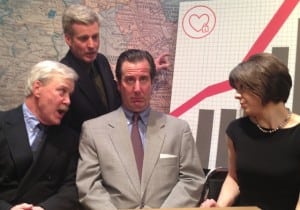 The Drones, who also produced last year’s revival of Beyond The Fringe at the Depot Theatre, will return there beginning Friday, May 9, with a different sort of British humor, crafted by the man who co-wrote the wildly popular television series Blackadder and The Young Ones. Full of “verbal gymnastics” according to Dunn, Gasping, written in 1991, takes on the corporate culture of that time, wielding a satirical scalpel.

The plot concerns the privatization (make that privatisation) of the planet’s last untapped natural resource: our air supply. Looking for a new product to add a large amount of revenue to what they already have, Lockheart Industries decides upon “designer air” coming up with a device that purifies air from the impurities of life, initially achieving great success.

But what happens down the line when, if you can’t afford to pay, you have no right to live? Lest this sound like a dystopian novel, rest assured that such comic stereotypes as hapless employee, junior executive, power-suit-wearing female executive, etc., take the satirical reins and run the course.

Depot Theatre Executive Director Amy Dul has been peeking in on rehearsals.

“Comedy allows the soul an escape and gives a refreshing start to our otherwise overloaded schedules,” Dul said. “Ben Elton, in his pointed comedy, Gasping, not only provides giggles, but gives a giant poke at the ills of capitalism. The games that the wealthy can play, while the poor suffer needlessly, are cannibalized in his satire. Making something out of nothing, a common theme in art, moves to disastrous results, as we watch the unfolding of marketing genius. Elton’s work is akin to a documentary about capitalism played by wonky British actors in a hilarious comedy sketch.”

Elton, of whom Dunn calls himself a huge fan, is an Olivier Award-winning playwright, comedian, best-selling author, and award-winning television writer. He has worked often with acclaimed actors such as Rowan Atkinson, Hugh Laurie, Stephen Fry and Emma Thompson. Gasping was Elton’s debut play and was a 1991 Olivier Award Nominee for Best New Comedy. Dunn says the play has gone “in and out of vogue” since then, “depending on the prevailing perception of corporate largess and ethics. It’s incredibly relevant to today.”

A key component of Gasping is its “linguistic dexterity,” according to Dunn. “The dialogue is challenging for actors,” he says, “but it’s ultimately in the service of something very silly. There are distinct rhythms, set-ups and pay-offs, ‘Eltonian’ specific cadences … Fortunately this cast has brought an affinity for the material to the table. There’s a certain playing style to the material. You don’t want a carbon copy of the original, but the rhythms and pacing that Elton’s previous casts used provide precedents to use as a guide.”

In a Philipstown.info/The Paper feature story last year on Beyond The Fringe, Dunn’s biographical details were shared.

He started off as a comedy writer in Los Angeles, working for syndicated shows, then shifted into performing, doing improv training at the famous The Groundlings improv and sketch comedy theater. After a year spent in the house troupe at the Comedy Store, followed by another guesting with different troupes, he felt the urge to do longer shows and plays and created a company, The ReEstablishment Theater, which subsequently found its own home in the 65-seat theater above which Dunn lived. Dunn’s wife received a job offer which brought them to the Hudson Valley about four [now five] years ago.

Dunn’s hopes are for The Drones Theater Company to eventually produce work throughout the Hudson Valley and in New York City. He calls Gasping “the first step on the journey.”

The cast for Gasping, several of whom appeared in Beyond The Fringe, includes Dunn, as well as Jean Garner, Donald Kimmel and George Kimmel. In rotating roles (not all appearing at each performance) are Laura Josephine Bach, Bobby Convertino, Kit Colburn, Laura Danilov, Katie Halpin, Tom Kelley, Sandra Lucas and Christine Wright. Dunn designed the set and lighting design is by Laura Panno.