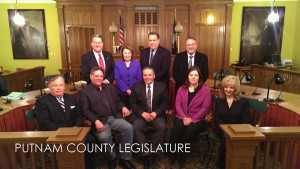 At their May 6 formal monthly meeting, the lawmakers also discussed whether to allow the Sheriff’s Department to police Lake Mahopac, lacing their deliberations with references to sales tax and assistance to Cold Spring for garbage pick-up.

The issue of private support for county activities arose with a resolution authorizing solicitation of $5,000 from private sources for the Run for Life, a 5K race organized by the Putnam County Health Department. To help fund the Sept. 7 event, the Health Department intends to “seek community sponsors and collect registration fees” from race participants, according to the resolution. Two legislative committees endorsed the concept. But District 9 Legislator Kevin Wright objected “to the fundraising part of it. I just don’t believe municipal entities should be in the public solicitation business,” he said.

District 8 Legislator Dini LoBue agreed with Wright “in theory and principle” and later joined him in voting against the resolution approving the race and solicitations.

Other legislators said the race promotes health and will cost the county nothing. “I think it’s a good thing. It saves taxpayer dollars,” said District 2 Legislator Sam Oliverio, the only Democrat in the Republican-dominated, nine-person legislature.

But another race supporter, District 4’s Ginny Nacerino, recalled that when she served on its Town Board, prohibitions barred Patterson from requesting private donations. As a legislature, “I think we really need to take a second look” at fundraising, she said.

The legislators then voted to 7-2 approve the race plans but also reached an informal consensus on the need to further explore the underlying issues.

Transit ads and Chambers of Commerce

Later that evening, the legislators voted 5-4 to hold off on consideration of a measure ceding management of transit system advertisements to the Putnam County Chambers of Commerce. As defined in the now-shelved resolution, rates for the ad signs or placards would range from $180 to $400 for placement in bus shelters and on buses and other vehicles — including, apparently, the trolley — with advertisers paying the county commissioner of finance.

However, as the resolution likewise stated, “potential advertisers shall contact the Putnam County Chambers of Commerce for information regarding advertising and ad placements.” The measure made the county chambers “responsible for producing and delivering the final sign(s) … to the county no later than 30 days from the date the advertising space is rented.” It stipulated that “if a problem is encountered in producing any sign(s) the Putnam County Chambers of Commerce should contact the county” and provided that “at the county’s discretion, additional time may be permitted for delivery of the final sign(s).”

“I didn’t realize we’re having the chamber produce the signage,” LoBue said. “I have questions about it.”

So did Oliverio, who wondered about “the correctness of having chambers run something that is a county initiative.” He noted that the county often seeks bids for such services. “I really am uncomfortable approving it without getting some type of legal opinion,” he said.

District 1 Legislator Barbara Scuccimarra disagreed. “The chambers are doing this to help Putnam businesses advertise on the buses,” she said, adding that “time is of the essence in this.”

“If there is a question at all, let’s get a legal opinion so we don’t have a controversy,” said District 3 Legislator Louis Tartaro. He, LoBue, Oliverio and Wright, joined by District 6 Legislator Roger Gross, then voted to scuttle the resolution. Scuccimarra, Nacerino, District 7 Legislator Joseph Castellano, and Chairman Carl Albano of District 5 opposed the move to scrap it.

Vincent Tamagna, Scuccimarra’s District 1 predecessor, who runs the county transit program, expressed his frustrations at the setback. “I understand your concern,” Tamagna, a Philipstown resident, told the legislature. But “some of this stuff is time-sensitive. Nobody is going to advertise on the trolley in September. I want to make sure we’re not going to lose the revenue.” He urged the legislature to hold a special meeting on the matter in the near future.

The legislature also voted reluctantly 8-1 to allow the Sheriff’s Department to assume the job of patrolling Lake Mahopac, at a county cost of $16,904, after the Town of Carmel abruptly pulled out, citing financial constraints. Legislators noted that the lake is largely private, although the public has limited paid access through boating concessions, and criticized the sudden departure from the job of the Carmel police force, despite its reported $9 million budget. As they discussed the matter, touching on the larger issue of county aid to municipalities, one legislator mentioned that Putnam assists in collecting garbage for an unidentified community.

“You mentioned the garbage in Cold Spring, which is a valid point,” Gross observed. The county provides $7,500 yearly to the village to aid in cleanup after tourism events, such as summer concerts. Given the new Lake Mahopac law enforcement chore, Gross asked if other municipalities might surrender duties to the county, too. “We have to look at this down the line,” he said.

Albano concurred that they should review the lake policing in terms of longer-range implications. For the moment, he said, he supported the transfer of the function to the Sheriff’s Department, despite the county cost, because Carmel businesses generate considerable sales tax for the county.

After the meeting, the legislature scheduled a special session on May 13 to discuss transit ads and other business.