The Philipstown Town Board Wednesday night (May 7) resumed its discussion of possible installation of a cell tower at the defunct landfill, as about a dozen neighbors turned out to express their anxieties and in one instance threaten the board with a fight should events proceed in a way the residents dislike.

With Vincent Xavier, site development manager for Homeland Towers, again on hand to explain cell tower ins-and-outs, the board continued what its members termed a preliminary review.

Based in Danbury, Connecticut, Homeland Towers works with companies like AT&T to site cell towers. Carriers have identified a cell-phone “dead zone” along a stretch of Route 9. Xavier approached the Town Board about locating a tower at the town-owned landfill, located off Lane Gate Road near Route 9 and currently used for recycling, in return for an unspecified amount of monthly rent, a new generator for town needs, and accommodation of emergency services equipment on the tower.

According to Xavier, the tower would be 180 to 200 feet tall and could be a “mono-pole” or, alternately, “we could do a faux tree. We’re open, really, to whatever you prefer.” 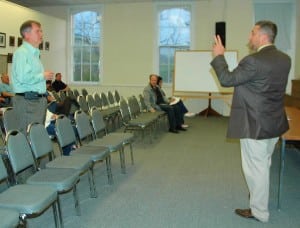 Thomas Lannon, Putnam County director of emergency management, spoke of the county’s interest in placing equipment on the tower. He mentioned the “serious problem” with cell phone dead zones along Route 9 in terms of communication. “We have some severe difficulties in this area” for firefighters, police and other first-responders, he said.

Prospective tower neighbors questioned its impact on property values and health, its appearance, the demand for it, and other aspects of the still-tentative project.

With the tower, “I think there will be a detriment as far as home values,” said Wayne Stephens. “I’m going to see it all the time.”

“This could in fact reduce our values,” said Tim Etta, while Samuel Seward wondered whether any decline in property values and corresponding decrease in taxes to the town would offset income from the tower.

Xavier said cell tower history shows no significant impact on property taxes. Addressing aesthetics, he said the landfill section eyed for use is relatively wooded and lower than other terrain, which will help screen the tower. “Unfortunately, these things are not invisible,” he conceded. “What we want to do is minimize” the effect.

He also mentioned that several private owners are interested in hosting the tower. Bombarded with audience questions, he declined to divulge names “because I don’t want all of you knocking on their doors to fight them.”

In any case, Xavier reminded everyone, Homeland Towers “can go to a private property owner. There are other opportunities here. There’s going to be a tower there, somewhere in that area.”

However, he said that while it might be cheaper to deal with a private owner, he thinks it better long term to work with the town. “Overall, I think it’s just a win-win. I think this is a good site. This isn’t just about finding the cheapest spot to do this” but about what’s best generally for the community, he said.

Those community members at the meeting clearly seemed unconvinced.

“Obviously, it’s not desirable to anybody in this room right now except for emergency services,” Supervisor Richard Shea observed.

Entrance to the Philipstown landfill-recycling center on Lane Gate Road

“If this is not acceptable to us, I for one am going to get everybody in this room — and the hundreds that didn’t attend — and we’re going to fight this, if we don’t think you’ve acted in our best interests,” one man warned from the back of the room.

“Right,” Shea acknowledged. “I also think you’re jumping way down the road at this point.”

“This is the beginning,” Councilor John Van Tassel noted.

“We have a lot of phases to go through, with more meetings, public hearings” and study, Councilor Nancy Montgomery concurred. And residents can help, she said. “We do appreciate your input.”

“We’re trying to be pragmatic about this,” Shea explained. “I keep going back to the point: If it is going to happen, why not mitigate the impact with some benefit? If it just becomes this huge headache, where everybody’s freaking out, then it goes across the street and happens anyway, where’s the benefit?” If that happens, he said, a private owner gets the benefits, “the tower goes up, everybody has to deal with it anyway, and we’re none the better.” Moreover, cell towers are ubiquitous, he added. “People look at them now. Everybody’s got a cell phone. They’re necessary.” 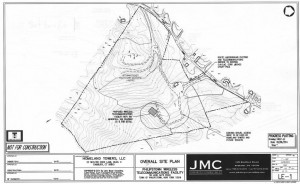 A preliminary site map of the proposed cell tower location; courtesy of Homeland Towers and the Town Board (click to enlarge)

2 thoughts on “Town Board Continues Cell Tower Consideration Amid Concerns”