Hudson River Sloop Clearwater’s Board of Directors has named Peter Gross as the organization’s new executive director to lead the organization, effective immediately. Anne Osborn, board president, made the announcement. 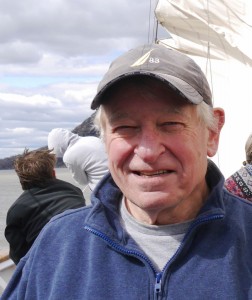 Gross, a resident of South Salem, New York, brings extensive nonprofit and business experience to the environmental education and activism organization. He brings 16 years of top-level global and national governance working with Plan USA and Plan International, and a well-established record of leadership on numerous boards involved in cultural activities, social justice, environmental stewardship, and political reform and advocacy for public health as well as women’s and children’s issues.

As Clearwater’s executive director, Gross will be responsible for supervising all programs and operations, including developing and overseeing its strategic plans and fundraising goals. He will also work to further cultivate relationships with Hudson Valley partners and broaden both the base of support and the impact of Clearwater’s activities.

“I am thrilled to be asked to lead this wonderful organization,” Gross said. “It gives me an opportunity to combine my nonprofit, business, and concert backgrounds with my passion for intelligent innovation and positive change, as well as my lifelong interests in music, education, grass-roots advocacy, social justice and the environment, and working to help achieve a mission in which I believe deeply.”

Gross added that, “I have long admired Clearwater as an organization and its values and programs, including the annual Great Hudson River Revival Festival, its operation of the sloop Clearwater, and exceptional education programs that it offers throughout the Hudson Valley. Clearwater, in its role as a powerful environmental advocate, has made remarkable progress in achieving a cleaner Hudson River and in bringing environmental education to the classroom, and the classroom to the river. I am proud to be a part of the celebration and fun, and part of the community-building strength found in the Power of Song.”

After graduating from college, Gross worked as a program developer in the anti-poverty program, where he was involved in the design of Project Head Start and other initiatives. He went on to law school and then to become a specialist in corporate finance and mergers at a New York law firm. As his career continued, he became part of the original management team that transformed HBO into a major national network and was also involved as a lawyer and advisor in the early stages of USA Network, Comedy Central, C-Net and various print publications. Among many other business accomplishments, he was chair of Time-Life Video and co-founder/CEO of the largest private media company in China.

He has also developed and staged concerts with world-class local and ethnically diverse performers, and developed and produced “In Transit,” a celebrated concert featuring the best of the NYC subway performers at Lincoln Center, as well as numerous free lunchtime concerts in New York City streets and parks.

Dr. William Flank, Clearwater board member and head of the Search Committee, commented: “Clearwater sought a leader with proven management ability who would be able to lead the organization forward in fulfilling our mission in a changing world by helping to respond to issues, build and maintain financial stability and forge consensus for change, while remaining faithful to our underlying values. I am pleased to say that in Peter Gross, we have found an outstanding person to accomplish that.”