After an oil boom began five to six years ago, such trains started traveling down the west side of the Hudson River, past Newburgh and West Point, across from Beacon, Cold Spring, Garrison, and the Indian Point nuclear power plant, bringing Bakken shale oil from North Dakota and Canada to refineries.

Otherwise known as unit trains, part of a “virtual pipeline,” the freight trains can hold 3 million gallons of oil and consist of 100 cars. With each chug of the locomotive, they raise questions and fears, at all levels.

Last week, Secretary Anthony Foxx of the U.S. Department of Transportation issued an emergency order, giving rail transport companies until June 6 to begin notifying states’ emergency management administrations, providing routes, cargo details, and other data before entering a state with crude oil trains with 35 cars and 1 million gallons aboard. The Transportation Department also asked — but did not force — railroads to stop using the ubiquitous cars, the DOT-111 model, considered too flimsy to carry crude oil safely. Critics contend that among other drawbacks, DOT-111s tend to split open in derailments.

While Hudson River environmental organizations Riverkeeper and Scenic Hudson welcomed the federal order, they said it’s not enough and puts the onus on the state and local communities to deal with emergencies, which can reach epic proportions: A July 2013 train wreck destroyed much of the Quebec village of Lac-Mégantic and took 47 lives.

Moreover, carrying crude oil by rail is only part of the equation: oil also makes the journey down the Hudson via barges or tanker ships, bound for refineries in New Jersey or New Brunswick, Canada. 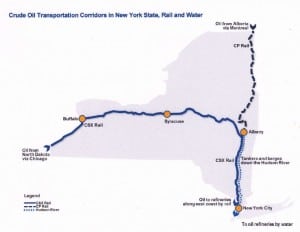 A map in New York state’s new report on oil transport hazards shows the passage of oil by train and tankers or barges down the Hudson River.

A day before the May 7 federal order, Scenic Hudson and Riverkeeper said at a joint statement that CSX trains carry about 2.2 billion gallons of crude oil down the Hudson annually, in two trains a day, but that 2.8 billion goes by barge or other river vessels. The Port of Albany serves as a transfer point for some oil and plans are pending for another facility in New Windsor, not far from West Point — or from Philipstown.

Riverkeeper called the rail-oriented emergency order “a good first step.” However, the group said May 8, “it fails to reduce the risk of future derailments and explosions, and unfairly places the burden of preparing for a 100-car derailment disaster on local first-responders who don’t have the staff and equipment” to handle the crisis. “Unit trains carrying millions of gallons of dangerous crude must be required to have their own emergency plans — current federal law requires such plans for barges and ships, but exempts trains,” Riverkeeper said. “This is a loophole that must be closed.” Riverkeeper also proposed that Foxx act swiftly by “taking DOT — 111s off the rails.”

Scenic Hudson President Ned Sullivan spoke in a similar vein in a May 12 audio statement about the state and local burden and the emergency order’s failure to do much “to prevent future accidents. For these reasons, until measures are taken that assure the complete safety of our river and communities from crude-related disasters, we continue to call for a moratorium on the use of DOT-111 cars,” he said.

In issuing the emergency order, DOT’s Foxx said a troubling “pattern of releases and fire involving petroleum crude oil shipments originating from the Bakken [formation] and being transported by rail constitute an imminent hazard,” requiring federal intervention. “The number and type of petroleum crude oil railroad accidents that have occurred during the last year is startling, and the volume of petroleum crude oil spilled as a result of those accidents is voluminous” compared to earlier incidents, he wrote. His order noted that the Bakken oil causes particular concern because it is probably more flammable than other oil.

Along with killing people, oil-induced rail disasters can force the evacuation of thousands of residents; inflict substantial environmental damage, lasting years; pollute drinking water; injure or kill fish and wildlife; wreak economic havoc; ruin homes, businesses, and local institutions; and leave widespread devastation. Environmentalists warn that with Bakken oil spills on rivers about 75 percent of the oil remains in the water, and eradication is so difficult that getting rid of only 25 percent is regarded as successful.

For another type of western oil, from Canadian tar sands, cleaning up about 5 percent is considered a success, Phillip Musegaas, director of Riverkeeper’s Hudson River program, told The Paper May 14. 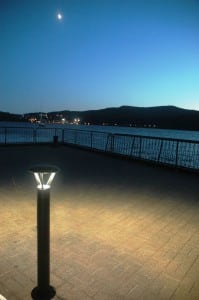 A partial moon hangs above the Hudson River at the Cold Spring dock, with the lights of West Point in the background across the river. (Photo by L.S. Armstrong)

According to information from New York state, while tar sands oil is somewhat less volatile than Bakken crude, it is also heavier and tends to sink in water. That means, Musegaas explained, that it “is particularly troublesome” because it drops down below the surface “and smothers life on the bottom of a river.”

Riverkeeper notes in materials on the crude oil issue that recently “New York has had three near-misses” with oil trains, including an incident three months ago outside Kingston. Furthermore, in December 2012, a barge with 112,000 gallons of oil spilled near Staten Island and spread oil on the water for six miles, imperiling a bird sanctuary. Likewise in 2012, a ship leaving Albany with 12 million gallons of Bakken crude oil ran aground, but its double hull prevented a spill (though environmentalists warn that double hulls do not prevent leakage in all accidents).

Because of the inherent dangers, New York Gov. Andrew Cuomo this year launched a series of rail car inspections in conjunction with the federal DOT. Inspections in February, March and April revealed broken rails; defective equipment, including faulty brake parts; non-compliant tank cars, and other inadequacies.

In January, Cuomo also called for a multi-agency review, which produced a 137-page report. Released April 30, it observed that “North American production of crude oil has boomed in the last five years” and “helped to position the United States as the leading producer of crude oil in the world, surpassing the net output of Saudi Arabia.” The boom has “raised serious public safety and environmental concerns due to the inherent volatility of Bakken crude, the sheer volume being transported, and the poor safety record of the type of tank cars used to carry the majority of crude oil,” the report states.

“With an increasing amount of crude oil traveling through the Hudson Valley, we must increase our urgency to ensure every possible safety measure is in place,” Maloney said after the Kingston derailment. “Installing trackside safety technology like Positive Train Control systems is the single most important step towards reducing human error and saving lives — the safety of our neighbors and families is too important to wait.”

In May, he wrote to President Obama and Sylvia Burwell, director of the federal Office of Management and Budget, urging stringent federal regulation of oil rail freight. “There’s not a moment to waste,” he said.

Meanwhile, despite the emphasis on trains, Riverkeeper and Scenic Hudson say they don’t overlook barges and boats.

“We’re very concerned about the risks of marine shipping of crude oil” on the Hudson, Musegaas said. He noted that the Coast Guard, not DOT, oversees river matters. The Coast Guard has an emergency response plan, due to be updated, since the current one, from around 2008, does not cover Bakken crude or tar sands oil problems, he said. As the revisions get underway, “they’ve invited us to be involved, which is very good news,” Musegaas commented. “The Coast Guard is certainly a good ally and I think they take this very seriously.”

But emergency response plans can only go so far, he cautioned. For instance, if tar sands oil spilled on the river in the Hudson Highlands, with its complex water flows, “it would be very hard to do a cleanup underwater,” he predicted.

Althea Mullarkey, a spokesperson for Scenic Hudson, mentioned the same threats. “Depending on marine conditions and the type of oil spilled — the Hudson River is turbid and subject to strong tides and currents and winter ice — recovery would be very difficult if not impossible in many situations,” she told The Paper May 14. “While Bakken [oil] does eventually degrade, if it flows into ecologically sensitive areas, like Constitution Marsh, the damage would take years to heal. With the heavy, sinking tar sands crude, everything” the oil touches, even rocks, “needs to be thrown away,” she said. “It cannot be cleaned.”

She added that “the 4,000 percent increase in crude production over the past years means a huge increase in the number of times the ‘trigger’ is pulled. It is not a question of if, but when, and how much” destruction occurs.